Exactly. People do not behave in similar or predictable or even stable ways. 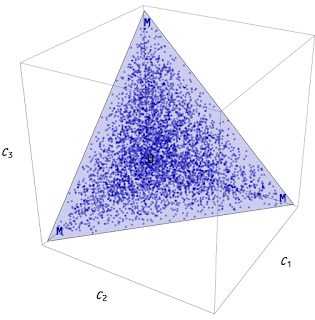 I am not and never have been a fan of comparing economics to physics. People are more than particles ... they do not always behave (or think) in similar or predictable or even stable ways. On balance, that is a great thing!! But it leaves tons of room for people to draw their own (non-economist) conclusions. Reality does impose discipline ... for example, in some way a budget constraint has to hold and opportunities usually do have costs ... so I am not throwing arithmetic out the window.

This is exactly the premise of the maximum entropy/information equilibrium approach (see here). Individual people aren't predictable, but do have to conform to some basic constraints. This is the idea behind Gary Becker's "irrational" agents [update: see here]. If they are unpredictable to the extent that they could be treated as random, this is just maximum entropy. Sometimes large scale correlations appear described by non-ideal information transfer.

I do have a quibble with this not being "physics" or that this means people are "more than particles". I believe she is really just referring to e.g. classical mechanics of  point masses, and not e.g. non-equilibrium thermodynamics (what the information equilibrium approach is closest to). The utility maximization approach [e.g. here pdf] is at its heart Lagrangian mechanics, but Lagrangian mechanics isn't all of physics. It's true that individual people don't follow exact trajectories in phase space. In fact, what tends to happen is the spontaneous creation of emergent behaviors [YouTube]. Macroeconomics tends to ignore this (though it might be the motivation for one of economists' more common approximations).

In most of physics, these "particles" aren't behaving in similar, predictable or even stable ways. Quantum physics takes into account all possible things that could happen with a weighted sum. Thermodynamics is precisely not knowing the microscopic state (hence entropy). One has to embrace the instability, unpredictability, and dissimilarity.

These slides [png, with pdf link at link] are a good (more technical) overview of what I am talking about.
Posted by Jason Smith at 7:22 PM