I just realized with this post, I will have 1000 posts. Here is the histogram distribution of the text file size in kB for a random sample of 150 posts: 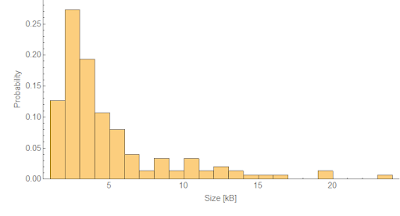 Counting 5 characters per word, the average of 4.4 kB is equivalent to about 900 words per post. That means I've written nearly one million words (given the margin of error for a sample size of 150 is about 1/√N ~ 10%). This is on the order of about 10 doctoral theses in physics.

Here's a list of my most popular (by pageview) posts:

Mark Thoma, information equilibrium is the model you're looking for  Apr 7, 2015

As several of these irritated their subjects, I think this list is better described as the top five most infamous posts. Only the one directed at Thoma could be considered positive. Apparently criticism works best.
Posted by Jason Smith at 3:00 PM