This Twitter thread was/is pretty entertaining. However, there is a good lesson here about "subsuming things into an integral" (which I've put in a snarky way): 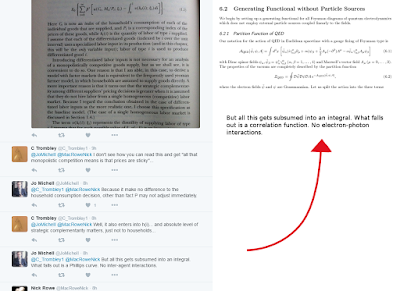 Just because you integrate out/integrate over some variable it doesn't mean it isn't doing anything.

Jo Michell replied to my snark: 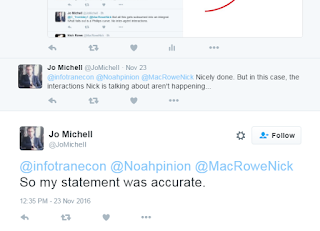 However, this isn't true. The objective function, shown at the top of the original graphic above, is best thought of as an interaction between and individual agent and a mean field of labor. The easiest way to see this is that despite being inside an integral, the "equation of motion" (functional derivative) is non-trivial (simplifying the objective function a bit for clarity, dropping time, x = ξ [, C, M, etc and other variables], and k = i [because that's what I wrote for some reason]):

This means that there is are particular values of h(k), supplied labor of type k, that will result from a given disutility functional v[h(k), x]. This means that individual utility will depend on the disutility of the "labor field" h, and the "labor field" will impact the individual utility. Actually, re-writing this functional allows us to put this in a form that explicitly shows it is just the leading order term of an interaction with a mean field potential ṽ[h(k)] like a (Wick rotated) Dyson series in physics: 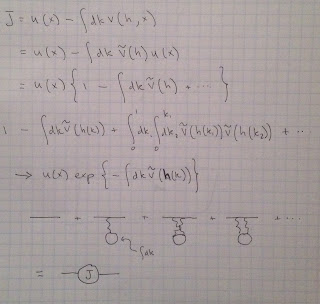 In the original text in the graphic above, Woodford refers to the inclusion of v[h(k)]:


"I ... have written (1.1) as if the representative household simultaneously supplies all of the types of labor."

The second emphasis is Woodford's, but the first is mine: this is an example of "as if" being effective field theory in action. We have an "effective representative agent" that actually includes interaction with the entire labor market (to first order).

Jo Michell has replied again (and Pedro Serôdio has chimed in). I added a couple of blurbs above (about the variable x just representing other variables). However, I'd like to show more how there is a real interaction here. First, let me LaTeX this up a bit ... our objective function (that we maximize) is:

and therefore we aren't at an optimum of our objective function (the Euler-Lagrange equation isn't zero). However, the functional form $v = \alpha \; \tilde{v[h] \; u(x)}$ is a simple ansatz that tells us that $\partial v/\partial u = 1$ and the integral gives 1 (hence $\alpha = 1$) and we have

And we have the basic $J$ term in the "propagator" as shown in the handwritten Dyson series (with "Feynman diagrams") above.

Now it is true -- as Jo Michell points out -- that basically this sums up into a coefficient $\zeta$ in the Philips curve. It's not too different (abstractly) from the vertex correction in the anomalous magnetic moment adding up to a factor of $\alpha/2\pi$. Our truncated mean field calculation above simply shifts utility by a bit, while integrating out all the virtual photons simply shifts $g$ by a bit.

Michell describes this state as lacking "serious heterogeneity or strategic interaction", and I guess it isn't serious if by "serious" you mean "beyond leading order" where fluctuations in heterogeneity start to matter (e.g. a recession hits manufacturing jobs harder than service sector jobs). However any average state of heterogeneity (labor market configuration) is going to be (at leading order in this model) simply a "mean field" -- a constant background.

You'd actually want to compare this theory to data to see what we'd want to do next. If it doesn't get that right (as reasonable given a leading order theory), the solution is definitely not to go to higher order corrections in the Dyson series, but rather to scrap it and try something different [2].

[1] For example, $v[h]$ could be an entropy functional for input distributions $h$, thus a maximum entropy configuration might optimize this equation of motion.

[2] In my experience with macro models, the leading order theory is terrible at describing data so going forward with heterogeneity/strategic fluctuations (higher order) is not good methodology. Better to scrap it and try something different based on different empirical regularities. This one, maybe?
Posted by Jason Smith at 12:31 PM