A dynamic equilibrium history of the United States 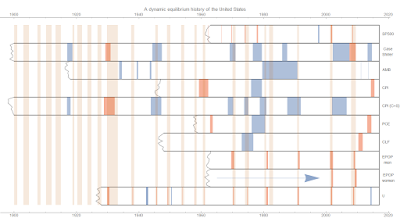 In writing the previous post, I got the idea of collecting all of the dynamic equilibrium results for the US into a single "infographic". It was also inspired by the recently scanned 75 Years of American Finance: A Graphic Presentation, 1861-1935, the 85-foot long detailed timeline compiled by Merle Hostetler in 1936 available at FRASER.

Hopefully the chart is fairly self-explanatory: positive shocks in blue, negative shocks in red, recessions in beige. The "tapes" indicate the range of data analyzed with the dynamic equilibrium model. The widths of the bars are proportional to the widths of the shock (roughly, the 1-sigma width).

U is the unemployment rate. CLF is the civilian labor force (participation rate). EPOP is the employment-population ratio (for men and women). PCE is the personal consumption expenditures price index. CPI is the consumer price index (all items), and C-S is the version available with the Case-Shiller data (see here). The Case-Shiller housing price index itself is included along with the S&P 500. AMB stands for adjusted monetary base.

The arrow indicates the non-equilibrium process of women entering the workforce (where I didn't try to decouple the recession shocks from the broad positive shock).

Here is a zoomed-in version of the post-war period: 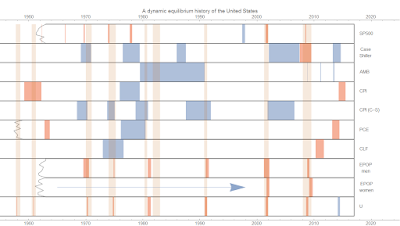 
I added the multiple shock version of the PCE dynamic equilibrium discussed in this post on the Phillips Curve. We can resolve the main shock of the 1970s into several shocks; these are shown in purple: 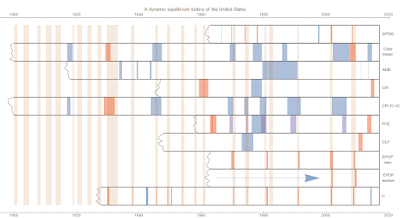 Additionally, we can see the "vanishing" Phillips Curve:

And even if it wasn't fading away, the causality is uncertain here. It could well be from unemployment to inflation and not the other way around (i.e. low unemployment causes inflation, but inflation doesn't cause unemployment).

I updated all the figures with more accurate versions of the widths and years (I had read some of them off the relevant graphs). I also increased the font size a bit and the image sizes because some of the lines are too narrow to show up except on a big image.
Posted by Jason Smith at 2:00 PM