Adding race and gender to macroeconomics

There are a variety of explanations of the so-called "Great Inflation" of the 60s and 70s, some monetary, some focused on government spending. However, due to the strong connection between labor force growth and inflation (see also the piece on demographic inflation by Steve Randy Waldman aka Interfluidity), it seems likely that the long non-equilibrium process of women entering the workforce in the 1960s and 70s is the causal factor. The main shock to the civilian labor force participation is dominated by the effect of women getting jobs and the employment-population ratios for men and women show different general structures in terms of dynamic equilibrium:

In fact, using the charts from here to display the shocks (shown as vertical lines in the graphs above) and their width (duration), we can see that the shocks to the labor force participation and to the employment population ratio for women precede the shocks to inflation using various measures:

Another area where macro without race and gender leads to misunderstanding is in unemployment rate dynamics. Ordinary observation of unemployment statistics leads Kocherlakota to write:

Arguably the most important is that blacks ‒ especially black men ‒ are much more likely to lose their jobs. This risk of job loss is highly cyclical, which is why blacks fare so much worse than whites during recessions. For example, the black unemployment rate peaked at nearly 17 percent after the Great Recession, compared with just over 9 percent for whites.

The wrong framework (and general lack of including race and gender) leads Kocherlakota to the wrong diagnosis in this case. The problem is not necessarily a dynamic one (i.e. due to black losing jobs more than whites), but rather one of hysteresis [1]. The overall dynamics for black and white unemployment are approximately the same (with this model indicating a similar matching function). 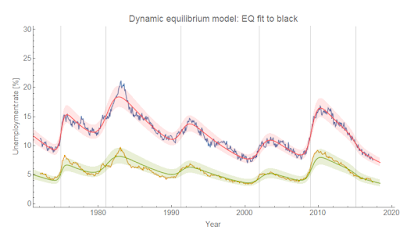 In the graph above, the black dynamic equilibrium is applied to white unemployment with the only difference being the starting value (about 5% instead of 10%). The model describes both sets of data roughly equally well indicating that the issue is initial conditions (slavery, Jim Crow), not present day dynamics. This hysteresis is caused by the fact that unemployment declines at the same relative rate for both black and white workers and both are subjected to the same shocks to the macroeconomy.

One way to imagine this is as two airplanes flying from Seattle to Chicago, with one taking off about an hour later than the other. Since both planes are subjected to the same wind conditions (macro shocks), the plane taking off later never catches up. In this case, the solution required is different from the solution to the problem as diagnosed by Kocherlakota: one would need to either make macro shocks affect black workers less, or increase employment through increased hiring. We are talking about something akin to reparations: Black Americans need to be compensated for being kept out of jobs by racist policies of the past.

Those are just two examples I've seen in my work with the dynamic equilibrium model, but they're definitely not the only ones. The "Great Inflation" sent macroeconomics off on a wild goose chase ending in DSGE models that can't forecast, attributing the inflation to central bank policy (which continues to this day). If it had been understood at the time that a certain amount of inflation would be inevitable because of women entering the workforce, the history of past 40 years of macroeconomics might have been different.

Update: changed EPOP graphs to have the same x- and y-axis. The original graph is here:

[1] When I say hysteresis, I am in no way saying discrimination has ended. For example, being employed does not tell us whether someone is underemployed or paid less for the same job.
Posted by Jason Smith at 6:00 PM