Causality in money and inflation ... plus some big questions

I noticed that the monetary base had what looks like a series of stepped transitions, so I tried the dynamic equilibrium model out on the data. The description is decent: 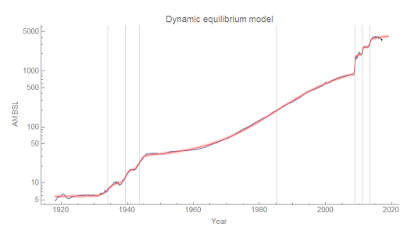 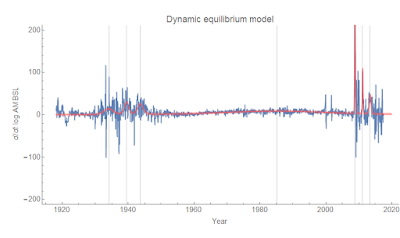 Aha! So, that's basically the quantity theory of money, right?


The interesting piece comes from the big shock in the middle part of the twentieth century. I've looked at several models of several macroeconomic observables that have this major shock, and we can play a game of "one of these things is not like the others":

As a side note, the slowdown in monetary base growth preceding the Great Recession that is used as part of the case for the claim that the Fed caused the recession (by e.g. Scott Sumner) is actually just the end of this large transition/shock in the monetary base.

I have an hypothesis that instead of Fed policy, the labor force growth slowdown might be behind the various bubbles (dot-com, housing) and financial crises of the past few decades. Much of the growth people were accustomed to in the 60s, 70s, and 80s was due to women entering the workforce (enhanced by more minorities in the workforce due to Civil Rights legislation, and by the post WWII baby boom). As this surge in labor force participation faded in the 1990s reaching its new equilibrium, investors looked for new (and potentially risky) sources of growth. This lead to bubbles and crashes as investors sought to maintain the rates of asset growth once supported by a growing labor force.

I am also working on an hypothesis that the Great Depression was caused by similar factors, except in that case it was the agriculture-industry transition that was ending. There was a analogous surge in labor force participation (including a surge in women entering the workforce) in the 1910s and 20s that is apparent in census data (see e.g. here or here).

The question arises: what does a "normal" economy look like? How does an economy that isn't undergoing some major shock (demographic or otherwise) function? I wrote about this before, and I think the answer is that we don't really know as there's no data. More and more I'm convinced we're flying blind here.
Posted by Jason Smith at 4:00 PM