Demand curves under the microscope

John Handley has a fun rant in favor of using calculus in "economics 101" (actually AP economics). He quotes the explanation of the demand curve

Handley correctly says this results in "a weird demand curve with 'steps' at different prices whose width is determined by the number of people will their maximum price at that level." In fact, here is one such demand curve: 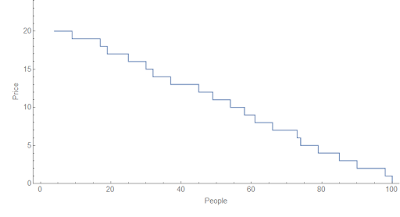 Now I've written about this explanation really defining more of an inverse survival curve than a demand curve (i.e. in this case the agents really are defined some distribution over prices they will accept, which is amenable to random agent models). However, there's an interesting place we can take this "economics 101" explanation.

This is entirely different from the smooth curves instructors like to draw to illustrate demand, and inconsistent with the math used when teaching firm behavior (marginal revenue doesn't make sense when the demand curve is a bunch of steps).

Yes, the derivative (the marginal quantity) doesn't make sense for such a curve because it is basically zero everywhere except for a discrete set of points. It looks (sort of) like this:

The actual slope of the demand curve (if we fit a line to the data points) would be ‒1/5, indicated by the black dashed line. Now when I said "sort of", that's because I didn't compute the actual derivative —  I computed a finite approximation of a derivative.

The derivative of a curve in calculus is actually the result of a process where you measure the "rise" of the curve divided by the "run" of the curve (how far the curve goes up or down along the y-axis divided by how far along you move along the x-axis). The process that gives you the derivative has you decreasing the steps along the x-axis (Δx) until the step size is basically zero (an infinitesimal referred to as dx). Note that Δy will also decrease, but if the curve has any slope at all, then even as Δx goes to zero the ratio Δy/Δx will converge to some number. That number is the derivative. In this case, on average the demand curve falls by about 1 unit for every 5 you move across (hence ‒1/5), but "instantaneously" (for very short steps Δx) it actually falls a whole unit almost instantly resulting in those spikes in the graph above.

In that graph, I stopped before Δx reached zero (the x-axis is people so Δx is Δpeople). The result is a series of spike. If I had let Δpeople go to zero, those spikes become infinitely tall. The marginal utility (or revenue) (i.e. the derivative) would just be a function with values of zero and infinity. It's not very illuminating, and totally disconnected from the way economics it taught with calculus.

In physics we tend to think of that Δx as a "scale": some sort of basis for measurement. As Δx goes to zero, we can think of a microscope "zooming in" on whatever we're looking at. The "scale" of atoms is much more zoomed in than the scale of biological cells when Δx is a distance measurement (in microns or meters).

In our example, our scale is the number of people. As we zoom in to a scale that is smaller than a single person (Δpeople < 1), you get that spiky derivative picture. However, if we zoom out to a scale where we no longer resolve individual people (Δpeople > 1), that derivative starts to converge [1] to the "slope" of that demand curve:

How do we interpret this? Well, it gives us a scope condition. The marginal approach to economics doesn't make sense unless we're talking about more than one person (in this case, a marginal utility  is more a property of 16 people than a property of a single person).

If we try to resolve marginal quantities at a scale on the order of a single person, it vanishes into nonsense — as if it was an emergent concept.

[1] What is interesting is that if our demand curve was actually curved, then we couldn't really zoom out too far because we'd stop resolving the curvature. This implies either that some curvatures of demand curves don't make sense, or that the curvature disappears as we look at bigger groups of people or whole economies.