New JOLTS data is out today. In a post from a couple of months ago, I noted that the hires data was a bit of a leading indicator for the 2008 recession and so decided to test that hypothesis by tracking it and looking for indications of a recession (i.e. a strong deviation from the model forecast requiring an additional shock — a recession — to explain).

Here is the update with the latest data (black): 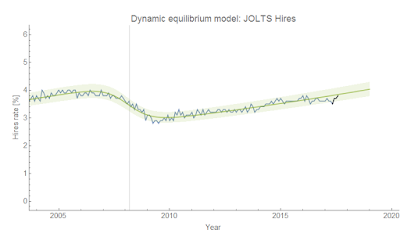 This was a bit of mean reversion, but there remains a correlated negative deviation. In fact, most of the data since 2016 ([in gray] and all of the data since the forecast was made [in black]) has been below the model: 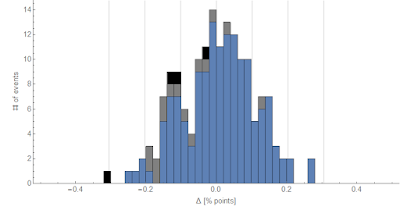 That histogram is of the data deviations from the model. However, we still don't see any clear sign of a recession yet — consistent with the recession detection algorithm based on unemployment data.
Posted by Jason Smith at 5:00 PM