New NGDP numbers are out today for the US, so that means I have to check several forecasts for accuracy. I would like to lead with a model that I seem to have forgotten to update all year: dynamic equilibrium for the ratio of nominal output to total employed (i.e. nominal output per employed, as I write N/L):

This one is particularly good because the forecast was made near what the model saw as a turnaround point in N/L (similar to the case of Bitcoin below, also forecast near a turnaround point) saying we should expect a return towards the trend growth rate of N/L of 3.8% per annum. This return appears to be on track.

The interesting part of this forecast is that the log-linear models are basically rejected.

In addition to NGDP, quarterly [core] PCE inflation was updated today. The NY Fed DSGE model forecast (as well as FOMC forecast) was for this data, and it's starting to do worse compared to the IE monetary model (now updated with monthly core PCE number as well):

I've also checked my forecast for the Bitcoin exchange rate using the dynamic equilibrium model (which needs to be checked often because of how fast it evolves — it's time scale is -2.6/y so it should fall by about 1/2 over a quarter). It is also going well: 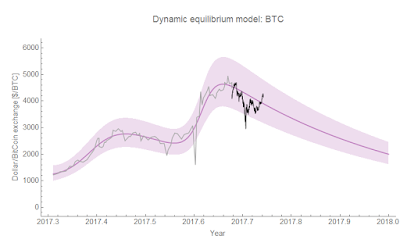 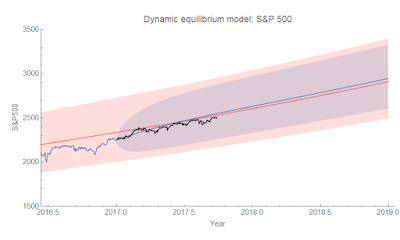