The St. Louis Fed has an article about the difference between the unemployment rate for women and for men, producing the data in this graph: 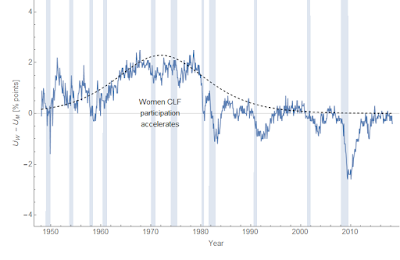 If we look at the data alone, it looks like this measure is positive until it drops to zero/negative  after the 1980s recessions. However, women's labor force participation was accelerating during this time (effectively adding more women looking for work) — which had other effects such as potentially creating the Philips curve. If we subtract an estimate of this effect (I admit I just eyeballed this fit using a dynamic equilibrium shock which is approximately Gaussian in shape), we essentially get a flat curve with dips for recessions: 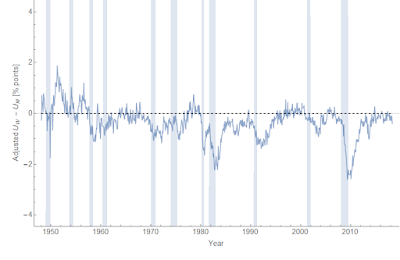 It's imperfect (especially the 1950s, which may have a bit of e.g. post-war labor force re-entry), but this representation of the data helps mitigate an "optical illusion" — the sudden drop in the 80s now just looks like a recession dip super-imposed on the declining dynamic equilibrium shock.

PS The other differences noted in the article are likely due to the fact that the dynamic equilibrium is logarithmic — falling from a higher unemployment rate falls faster than falling from a lower unemployment rate. The figure about gender differences in time shows the difference between the era of women entering the workforce and  e.g. the 2008 recession where women's labor measures become correlated with men's (click for larger image): 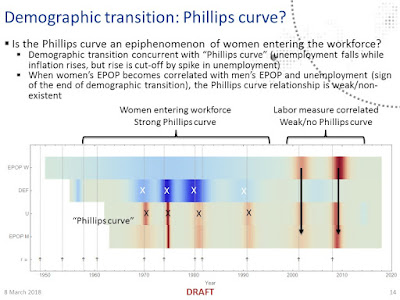