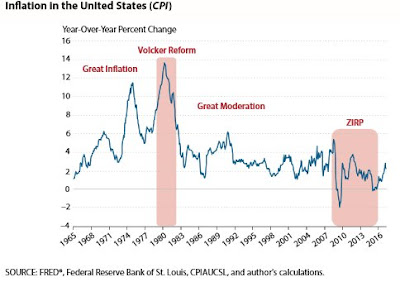 I guess that's one way to look at it. However, the dynamic information equilibrium model of CPI, that I  have been tracking the forecasts of for some time, provides an alternative macroeconomic history. Let's look at the overall model: 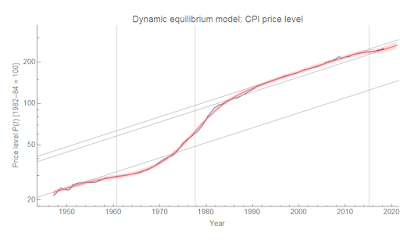 The dynamic equilibrium is about 2.5% CPI inflation, with three major shocks — a post-war slowdown, the demographic shift of women entering the workforce (see Twitter thread here, or download pdf here), and the post-Great Recession drop in the labor force. This model is fairly accurate, averaging only a few percent error over the 70 years. But the difference between the model and the data is also interesting: 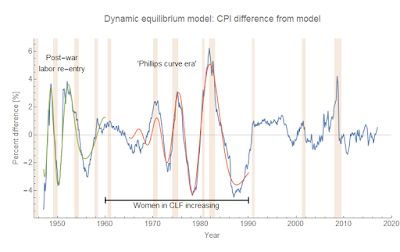 The periods of large error are associated with transitions of people into the labor force (as well as a strong Phillips curve per the link above). Aside from those periods, the error is only about ~1% (in CPI level, i.e. a CPI of 100.0 ± 1.0). From this, we can re-make the graph at the top of this post: 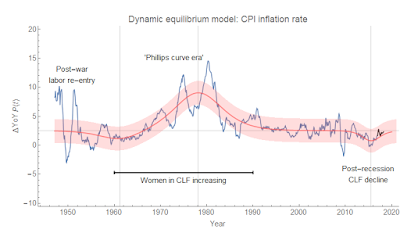 So was it the Fed's actions, or are the trends and fluctuations in CPI primarily due to the labor force? It's true that any view of CPI data is going to be model dependent (of course, the dynamic equilibrium model is empirically accurate and has done a good job of forecasting). But what I found to be fascinating is that those fluctuations in CPI highlighted above in green and red look just like chirps. In fact, the data looks remarkably like the gravitational wave chirps measured with LIGO:

These chirps are formed by inspiraling black holes or neutron stars — as their orbits around each other shrink (due to shedding energy via gravity waves), the period of the orbit gets shorter and shorter resulting in higher and higher frequencies until the orbiting pair shed all of their orbital energy and collapse into a black hole.

What if the mechanism of people entering the workforce creates these oscillations in CPI, which cause more people to fluctuate in and out of the workforce with the accompanying recessions and recoveries? It's an hypothesis, but the chirp wave forms (red and green above) fit the data pretty well.
Posted by Jason Smith at 6:04 PM