Checking in on my forecasts of the S&P 500 and the 10-year interest rate (click to expand): 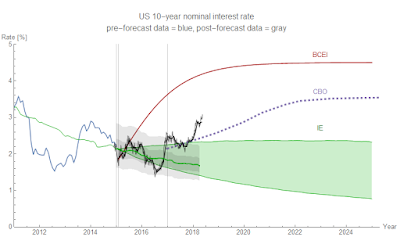 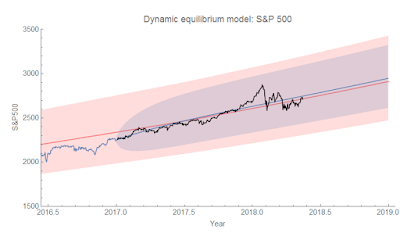 The 10 year rate has increased its deviation from the model, but the S&P 500 is tracking the forecast fairly well despite heading towards a deviation in early 2018.

Also, I shared this set of counterfactual recessions using the JOLTS job opening rate on Twitter. Each frame is a different assumption for the center of a possible recession between 2018.5 (~ July 2nd) and 2020 (December 31st) in steps of 0.1 year (36.524 days) because metric system is best:

The only signs of a recession (in the information equilibrium framework) are the abnormally high interest rates and the negative deviation in the job openings data. If those evaporate, then so does any evidence of a possible recession. There are other more traditional signs out there as well, such as yield curve inversion.
Posted by Jason Smith at 2:30 PM