In an earlier post I tried to make a play for the null hypothesis in saying that David Beckworth's claim that the Fed is achieving its inflation target is hard to justify since the currency component of the monetary base (M0) seems to describe inflation over the past 50 years -- and thus the Quantitative Easing (QE) (or large scale asset purchases LSAPs) appearing in the monetary base (MB) is irrelevant. Tom Brown asks a great question in a comment: did the rounds of QE/LSAPs cause both MB and M0 to go up?

Here is a graph of the monetary base -- reserves in dotted red, currency in solid blue: 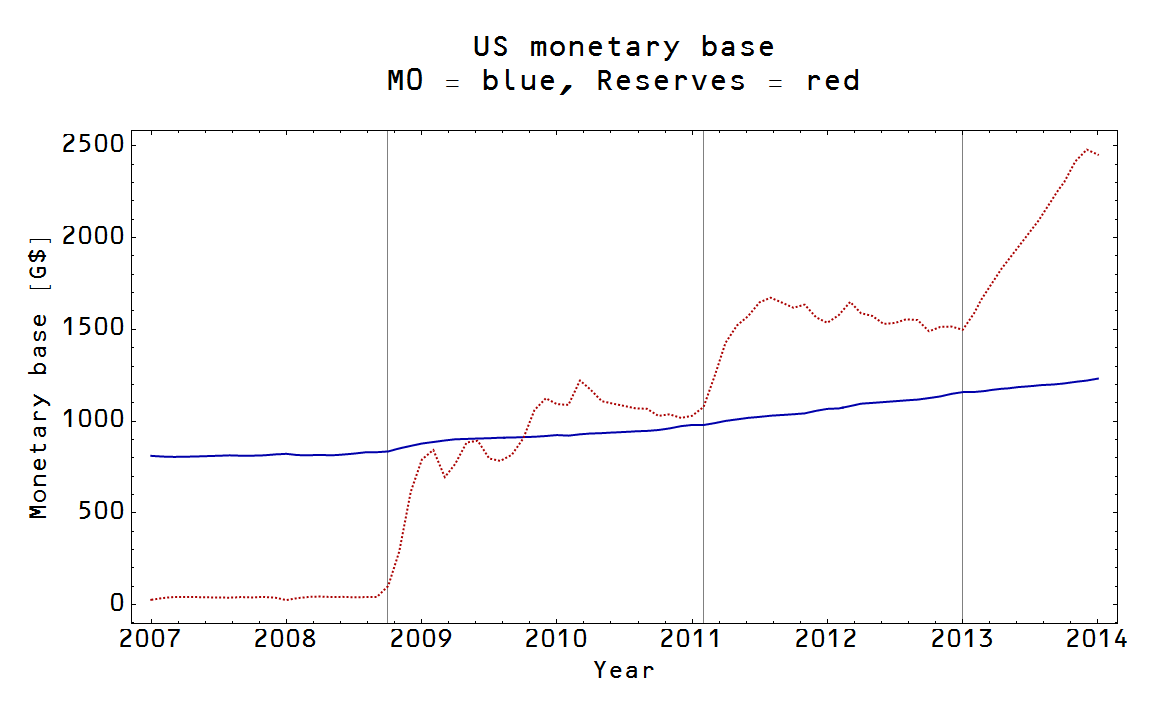 The rounds of QE appear as vertical lines. There is a hint that QE1 may have caused a jump in M0, but little evidence that subsequent rounds did anything. It will help to look at this data in another way. Here are the (logarithmic) derivatives of the data, scaled to the maximum value between 2007 and 2014: 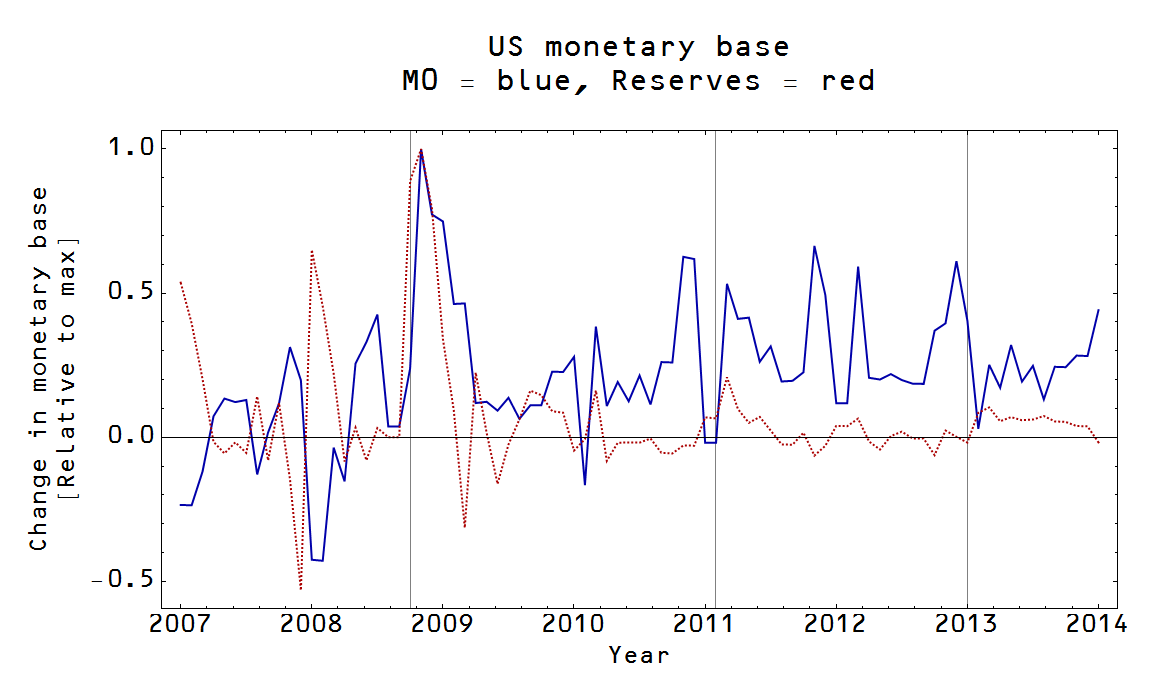 The rise in M0 coinciding with QE1 jumps right out in this graph, but the other two rounds show little (obvious) impact. This becomes even clearer if we look at the data in yet another way: 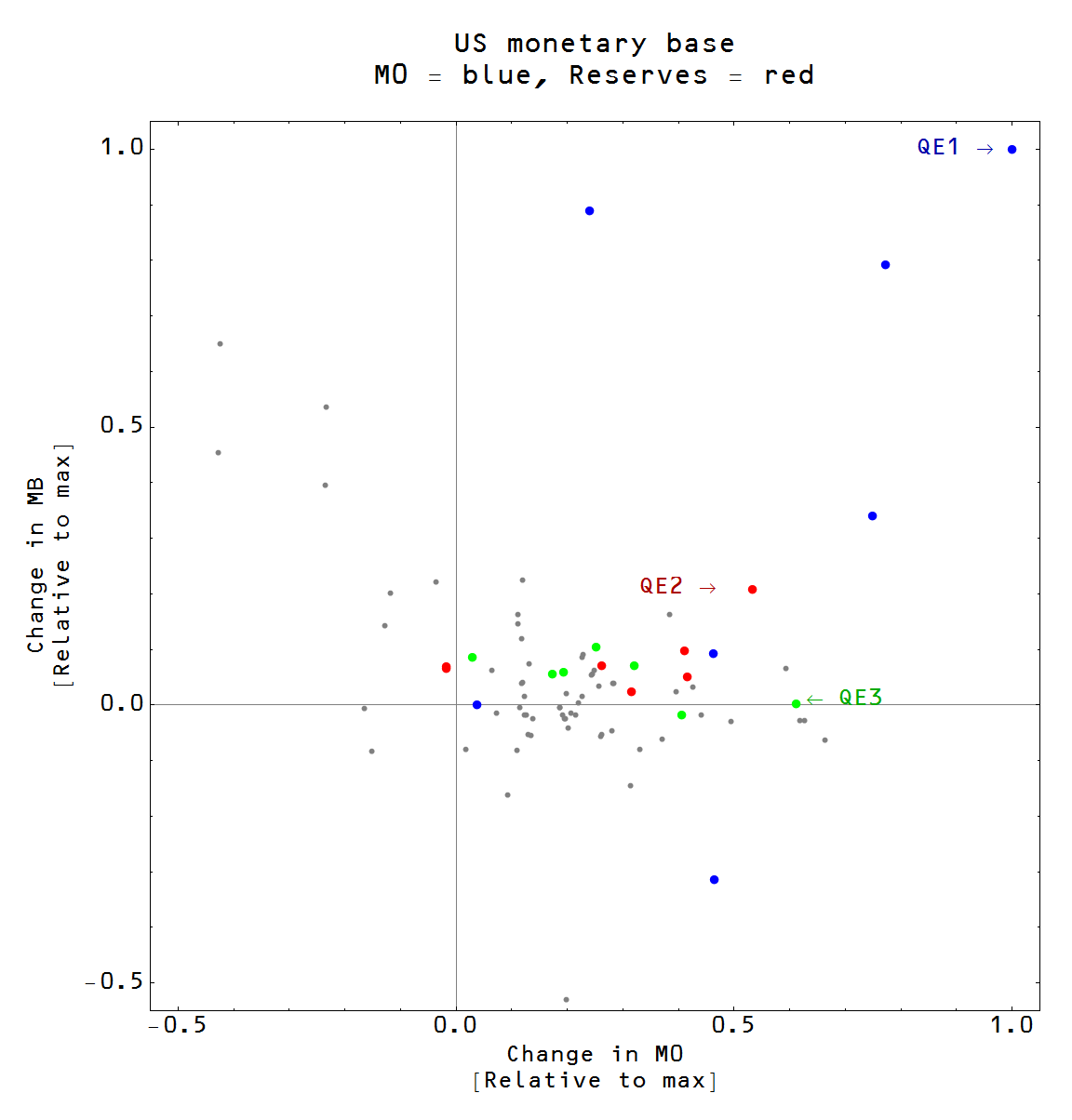 In this graph, I show the blue line as the x-axis and the red line as the y-axis. If changes in MB reserves affected M0, then the dots should all appear along the line y = x. For QE1 (shown as blue dots) this is a reasonable model (ok, reasonable is a stretch given the data -- let's try plausible). For QE2 (red dots) and QE3 (green dots), the data seem to fall along the line y = constant with the rest of the data (gray dots) -- again, implying zero influence.


It is possible that QE1 helped cause M0 to rise, but subsequent rounds of QE didn't do much of anything (i.e. maybe QE1 already did as much as could be done). Imagine M0 as a partially filled glass of water. QE1 filled it up; QE2 and 3 simply sloshed over the side. This view seems to be somewhat supported by data.

Before 2008, M0 (and MB) started to fall below trend. The crisis hit and the first round of QE starts sending M0 back to the trend. Subsequent rounds of QE do less because M0 is closer to trend (in a sense, this is a model where the impact of MB is proportional to the difference between M0 and the trend). Here is a graph that illustrates this point (M0 in blue, the pre-crisis trend of M0 is dashed blue and MB -- M0 including reserves -- is red): 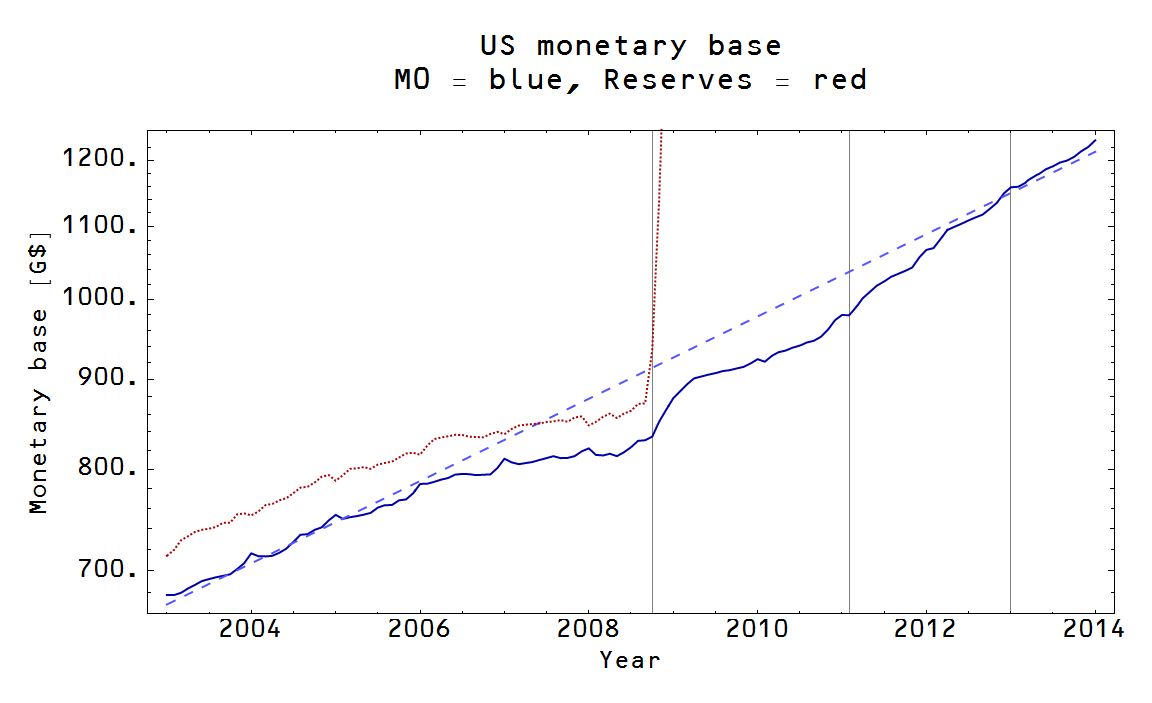 The remaining slow return to trend may have more to do with waiting for NGDP and unemployment to return to normal than QE2 and QE3. The brings up the question: was QE1 enough? Actually, that question might not be strong enough: was QE1 serious overkill? Did we only need, say, 300 billion dollars worth of QE1 rather than 3 trillion over the course of three rounds?

The data is too limited at this point to make solid conclusions. QE1 seems to have been concurrent with a rise in M0 (causality is difficult to determine without a model -- perhaps QE lowered interest rates and caused output to increase via the ISLM model which caused M0 to go up?), but there is no evidence other rounds of QE did anything to influence inflation in the model where M0 determines inflation. (Again, maybe MB lowered interest rates and caused output to increase through the IS-LM mechanism, causing inflation to increase.)
Posted by Jason Smith at 4:07 PM