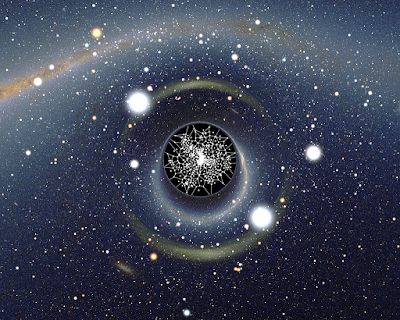 I saw this in three places (Robin Hanson, Tyler Cowen, and Scott Sumner) over the weekend. The basic idea is that the market capitalization and the "book value" of companies in stock indicies has wildly diverged. Hanson refers to the difference as "dark matter" and says that companies are now 5/6ths "dark matter".

This would be confusing if you take the conventional economic viewpoint that two things in equilibrium (market cap and book value) are simply proportional to each other. Let's define $M$ to be the market capitalization and $B$ to be some number of physical world "book widgets" (parcels of land, semiconductor fabs, employees, etc). The conventional view would have you surmise that:


where $c$ is some constant that represents some price per book widget.

However, if we take market capitalization and book widgets to only be in information equilibrium with each other, I(M) = I(B), we can get a more complicated relationship [1]:


where $p$ is the stock price. Which, if we solve the differential equation, says that


If $k$ is large, then one would expect a big difference between $M \sim B$ and $M \sim B^{k}$. That means that $k$ seems to be large, leading to lots of "dark matter", and that the fraction of dark matter should get larger over time since that fraction would be

There is one thing missing here, what about slowly growing companies (or failing ones with falling stock prices)?

Now you may accuse me of just re-labeling dark matter as this $k$ factor ... and that is kind of true! But $k$ should change over the lifetime of a company, high at first in its fast growth start-up phase, then lower over time. Restructuring or getting into new lines of business could cause $k$ to increase temporarily, but entropy wins in the end (doesn't it always). Any company that goes near $k = 1$ would be ripe for a hostile take-over or simply split-up and sold for its book widgets.

We may not be able to predict what $k$ is for a particular company at a given time, but the general behavior tells us that when we look at market indices and see more and more "dark matter" we're actually just seeing selection bias among a larger and larger pool as the economy grows in size.

That is to say all companies have dark matter! But they may easily have as much as they always did and all we're seeing is selection bias.


[1] Think of market capitalization as 'aggregate demand' for a company.