Economic forecasts are not similar to physical science forecasts

Mark Thoma links us to this blog post that tries to make a point about economic forecasting:

Okay, so people make fun of the bad forecasts of economists. Fair enough. But economists are trying to forecast actions of sentient, prospectively focused creatures.

Hurricanes are just big unruly piles of wind. But we can't forecast THOSE either. Check out this "ensemble" forecast for the next week .... [see the blog]

As I wrote in a comment, hurricanes are part of a system where the laws governing the micro-states are known and the macro system is known to be nonlinear and chaotic because of those microfoundations. I had two points:
The first is directly assumed in the quote: the macroeconomy is not known to be due to the "actions of sentient, prospectively focused creatures". That would exclude emergent properties based on, say, measures of economic entropy (e.g. here). On a fundamental level, of course an economy is made up of people like an ideal gas is made of atoms. But individual atoms don't have a temperature or entropy -- these are emergent concepts. This is the problem with "obvious" complexity ... in the economic problem it is assumed.


[Update + 1.5 hr: Actually, the weather model uses the emergent concept of temperature. I am not aware of any emergent concepts from micro that are used in macro forecasts ... ]

Additionally, while hurricanes are unpredictable, climate predictions are fairly stable -- I would put predicting the path of a hurricane on par with predicting the growth of a single industry in economics. The forecasts we make fun of in economics (of future NGDP or inflation) are akin to climate forecasts, not weather forecasts.

And to really bring it home, those different hurricane paths can be used to construct a meaningful probability distribution of landfall locations. In an economic model, you can't do that. It's just the probability of NGDP = X assuming the model is correct. Symbolically, we have (via Bayes' theorem)

where f(P(weather model)) is close to 1 versus

This is a good time to bring up my head-to-head with the Fed (both the FOMC predictions and the DSGE model from the NY Fed) I started almost exactly a year ago in September of 2014. Both of these projections assume complexity. The information equilibrium model (IE, aka the information transfer, IT model) does not. In fact, a constant inflation model would do almost as well as the IT model (in the third graph, the green line). 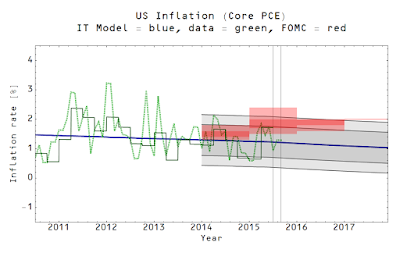 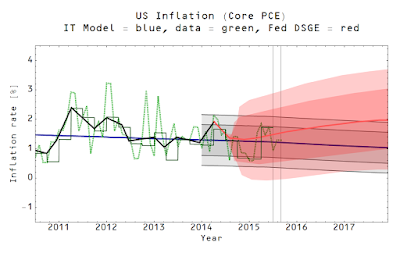 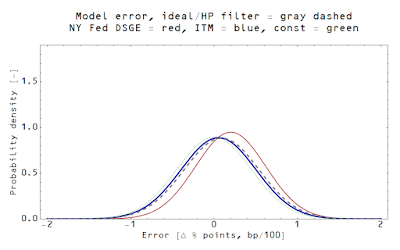 Actually, the IT model does as well as using a smoothed version of the data as the model (dashed gray line)! It's not quite 1-sigma separation from the NY Fed DSGE model, but it's getting close.