I wish I could write something clear enough because I think once I do David Glasner would champion the maximum entropy approach. Last night he wrote about representative agents having different properties from the micro agents. He used a traffic model as an analogy:

Consider a traffic-flow model explaining how congestion affects vehicle speed and the flow of traffic. It seems obvious that traffic congestion is caused by interactions between the different vehicles traversing a thoroughfare, just as it seems obvious that market exchange arises as the result of interactions between the different agents seeking to advance their own interests. OK, can you imagine building a useful traffic-flow model based on solving for the optimal plan of a representative vehicle?

No, of course not. The 'representative vehicle' (that travels at some varying velocity, carrying a varying number of passengers) is an emergent degree of freedom that simplifies the theory.

In physics we have quasi-particles (collective excitations) like phonons. In fact, you'd probably describe a traffic model as a linear combination of vehicle phonons:

The atoms in a lattice don't travel anywhere, yet phonons (emergent waves that don't exist for individual atoms) carry the energy of a shock to the lattice across it. The properties of a material like its head heat capacity and temperature follow from maximum entropy distributions of phonons.

Reading Glasner's post gave me the feeling that my blog is like screaming through sound proof glass. Here's Glasner just before the previous quote:

There is a separation between the micro agents and the macro properties and when this separation occurs, the macro properties (given by the representative agent) are the result of the bulk properties of the economic state space. Sometimes this separation doesn't occur (or breaks down), and the representative agent dissolves into a complicated simulation with millions of agents. This is the main point of my earlier post and the idea there is summarized in this graphic: 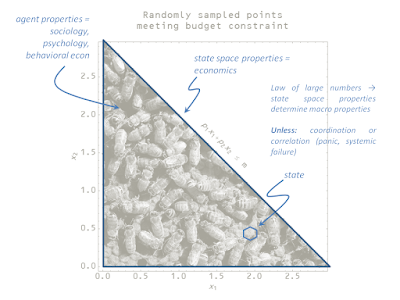 This happens in disordered systems (like glasses) as well as so-called meso-scale physics where the phonons become less well-defined. In that case there is no simplification, and you have to treat the problem as made up of millions of individual atoms [2].

Economics doesn't have a good way to tell which is applicable when (scope conditions) yet, but the information equilibrium model is a good start, IMHO.


[1] If Glasner doesn't mean this and means that even an emergent representative agent can't be used, then I'd say we have disagreement. But we'd agree again if what he means is that an emergent representative agent can't be used when the economy is out of equilibrium (in a recession). That's non-ideal information transfer and I get to that in the last two paragraphs and the footnote below.

[2] This is non-ideal information transfer, and can be seen in an ideal gas where molecular forces become important (and the gas condenses into a liquid ... see link).

[3] I have a conjecture that this always happens.
Posted by Jason Smith at 4:00 PM