The SMD theorem and ... oh, no ... not another physics analogy

The SMD theorem says that the aggregate market demand curve only inherits a few properties from the individual demand curves: continuity, homogeneity of degree zero, Walras' law and a boundary condition that demand is large as prices go to zero.

This basically says that the aggregate theory doesn't necessarily have much to do with the individual agents ... that the SMD theorem is the "anything goes theorem" (at least from the Wikipedia article).

I've said before that homogeneity of degree zero seems to be a symmetry principle for economics. And Walras' law (that I've looked into before: here and here) is something like a conservation law. In physics, we'd say that there is a macro scale and a micro scale instead of aggregate market and individual agents, respectively. Translating the SMD theorem into these physics terms, we have the statement:

That is exactly the idea behind constructing an effective field theory!

See the link for the definition of effective as it's used here. Let's say we start with the fundamental theory of quarks and gluons, QCD. It has an SU(3) symmetry (color) an (approximate) SU(2) symmetry (weak isospin/chiral) and an SO(3,1) symmetry (Lorentz), and obeys the basic conservation laws of physics (momentum, energy). Now QCD is impossible (well almost impossible -- nice job!) to solve at the "macro" scale, so what do we think it looks like?

Well, if we put the theory in a Lagrangian that takes care of the conservation laws [1]. Do we have a theory of a representative quark? That doesn't make sense, really. Quarks need to come in pairs or triplets to cancel their color charge. In economics, agents actually need to sell stuff to each other so you can't really have just one agent [2].

So what do we observe at the macro scale? Protons, neutrons, pions, ... hadrons. In macroeconomics, people have constructed aggregates like the price level and NGDP. Macro is primarily concerned with these aggregates. So hadrons on one hand and macro aggregates on the other are our "particle content".

In physics, we then put these together into terms in the Lagrangian in ways that maintain the symmetries [1]. It's mostly a process of index matching where you make sure there aren't any hanging spacetime indices (Lorentz symmetry) or isospin indices (chiral symmetry), etc. The key thing to understand is that an effective field theory (like chiral perturbation theory [3, 5] with empirical parameters Fπ and mπ) can look totally different from its microscopic (fundamental) theory (like QCD with only one parameter gs [4]).

I think this is the heart of the SMD theorem. The effective theory of macroeconomics can (and probably does) look entirely different from the fundamental theory of microeconomics.

The call for microfoundations was basically a call for a quark and gluon mechanism for any chiral perturbation theory result. That would be tedious. I can calculate a pion scattering cross sections more easily using Fπ and mπ with Fπ measured empirically than I can from setting up a lattice calculation to calculate Fπ from QCD. Additionally, there is no parameter Fπ for a single quark! The pion decay constant Fπ only makes sense for a pion.

And there we can make a connection to the information equilibrium approach: we measure the information transfer (IT) index k (or kappa) empirically. You could potentially calculate k from a large simulation of individual agents ... and more power to those that want to try. But k does not exist for an individual agent -- it is a property of aggregate agents. [5]

The bottom line is that representative agents (at the micro scale) and microfoundations assume the structure of the effective macroeconomic theory. They represent massive limitations of the possibilities -- and from what I've seen, may even exclude the real theory of macroeconomics.


[1] I'd like to think of information equilibrium relationships as the equivalent to Lagrangians that essentially guarantees Walras' law and homogeneity of degree zero.

[2] Is there macro money confinement? At the macro scale we never see money outside a transaction? Potentially interesting ... but total speculation.

[5] As I mention in a footnote in the paper, as well as at the effective field theory post mentioned above, the information equilibrium model I present may only be the leading order effective theory. We have 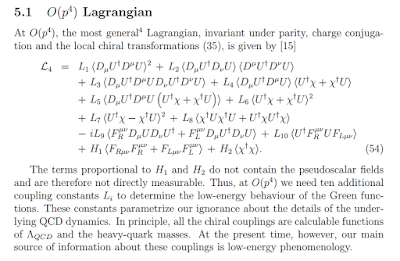