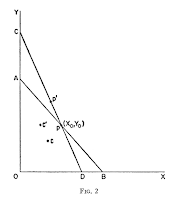 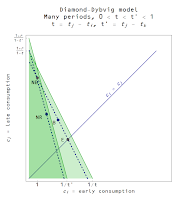 The second graph is my maximum entropy version of the Diamond-Dybvig model, but NR and B correspond to p' and p in Figure 2 from Gary Becker's paper below.

David Glasner identified the argument I was making here (and in the links here) as one made by Gary Becker in 1962; here's the comment from David:

Jason, Thanks for the link and your follow up post as well. Your argument reminds of the paper "Irrational Behavior and Economic Theory" published in JPE in 1962 and reprinted in Becker's The Economic Approach to Human Behavior in which he showed that budget constraints were sufficient to imply negatively sloped demand curves and other standard microeconomic results. He credited Alchian's 1950 paper in JPE "Uncertainty, Evolution, and Economic Theory" for anticipating his argument. As I recall, Israel Kirzner wrote a comment published by JPE criticizing Becker for not sticking with utility maximization. It might help you to use Becker’s argument as a way of improving your communication with economists who, if they are like me, have trouble comprehending arguments that aren't made in the language we're accustomed to speaking. One other point to consider is that in an intertemporal context with incomplete markets there is no such thing as a true budget constraint because the prices in the budget constraint are largely expected prices not actual prices, so if prices turn out to differ from those that were expected, budget constraints may be violated (households or firms go bankrupt).

Regarding the language, I completely agree that is an issue. Regarding the intertemporal budget constraint, a post is forthcoming (though it basically involves combining these three posts [1], [2], [3]).

Speaking of language, language was the reason it took me a little while to parse Becker's version of the argument (I have a hard enough time parsing even physics papers [pdf] from the 1960s), but it is pretty much identical to ones I've been making. There are three key differences as I mentioned in a reply to David on his blog and thought I would expand here.


1) [I give] an argument that if the number of different goods [or intertemporal periods] d being optimized (the number of axes) is large, there is no need to restrict to the budget constraint (as ‘maximization’ happens automatically as d → ∞)


If opportunities were initially restricted to the budget line AB in Figure 2 [reprinted above], the average consumption of many households would be close to p, the midpoint of AB, with different households uniformly distributed around p.

The existence of a large number of goods (or intertemporal periods) d leads to the average being near p without restricting to the line AB. As d → ∞, we have c  → p because most of the points in a high dimensional volume are near the surface, not the interior.


When Becker says uniformly distributed (and equal probabilities) in the quotes above, he is making a maximum entropy (least informative prior distribution) argument. Therefore, information equilibrium relationships will apply.

3) [There is] the possibility of falling away from the ‘maximum’.


A simple random walk around the simplex leads to cases where occasionally the budget constraint isn't saturated as illustrated (for a single period and d >> 1 goods markets) at this link.


I would like to emphasize that while Becker refers to agent actions as irrational (in the title) or "Inefficient" or "impulsive", I take the view that those actions may just be more complex than we can model efficiently ... for example, so complex as to appear random from an outside viewer.

This Socratic dialog could be seen as Gary Becker arguing with Kirzner ...
Posted by Jason Smith at 12:30 PM