What is real growth?

Commenter John Handley points out (correctly) that Paul Romer is talking about real output, while in my previous post, I talk about the price level. The problematic extrapolation from RGDP growth rates doesn't really depend on using real output or the price level (specifically, the physical analogy I wrote down); I was attempting to connect the result to a previous result about the price revolution of the 1500s (or so).

So I went back and re-worked the result in terms of real output (R) with real growth rate ρ (i.e. R ~ exp ρ t). I also made use of some stuff from the section on the AD-AS model in the paper. Using the market (information equilibrium relationship) P : N ⇄ M we can show

And the picture we produce is very similar to the price level one and has the same interpretation -- simply extrapolating back with constant real growth rate ρ doesn't capture the fact that there probably wasn't a monetary economy in the past: 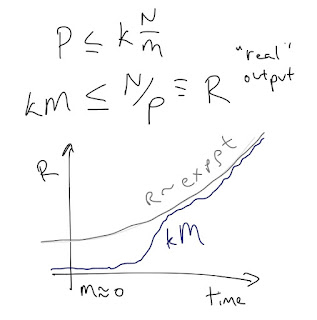 What's also interesting is if we assume information equilibrium and use the "money mediated AD-AS model" from the paper, i.e.

We don't know if ks is changing or even what its value is (except that it is of order kn in order for k ~ 1 empirically). It could be greater than one or less than one. Therefore so-called real output doesn't necessarily represent real widgets, but rather some conversion of physical widget units to money units. We have R ≡ N/P = N/(dN/dM) so the units of real output are the units of M (i.e. dollars).

Of course, this is a model dependent result. And that is the point -- Romer's argument that real growth has been accelerating is also model dependent.

PS Here are more details of the derivation (in long hand): 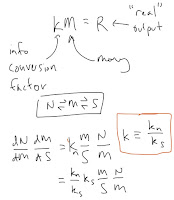 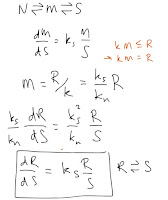 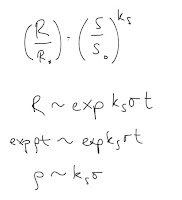