The impact of Abenomics

My original response to Noah Smith's take on Abenomics one year out was hijacked by determining the role of the central bank reserves component of the monetary base, but I did finally give Abenomics a two sentence assessment:

Abenomics appears to not have affected the currency component of the base, so it is unlikely it has made a significant impact on inflation except maybe on interest rates (real and/or nominal). Macro data is again pretty uninformative.

Let's put a little more meat on that assessment.

Let's begin with what we're going to call Abenomics. It has three major components: fiscal (~2% GDP increase in government spending), monetary (a QE-like program) and psychological (FDR "fear itself"-style motivational leadership). I won't address the last piece, but here are the empirical GDP and monetary base (including the currency component I'll call M0): 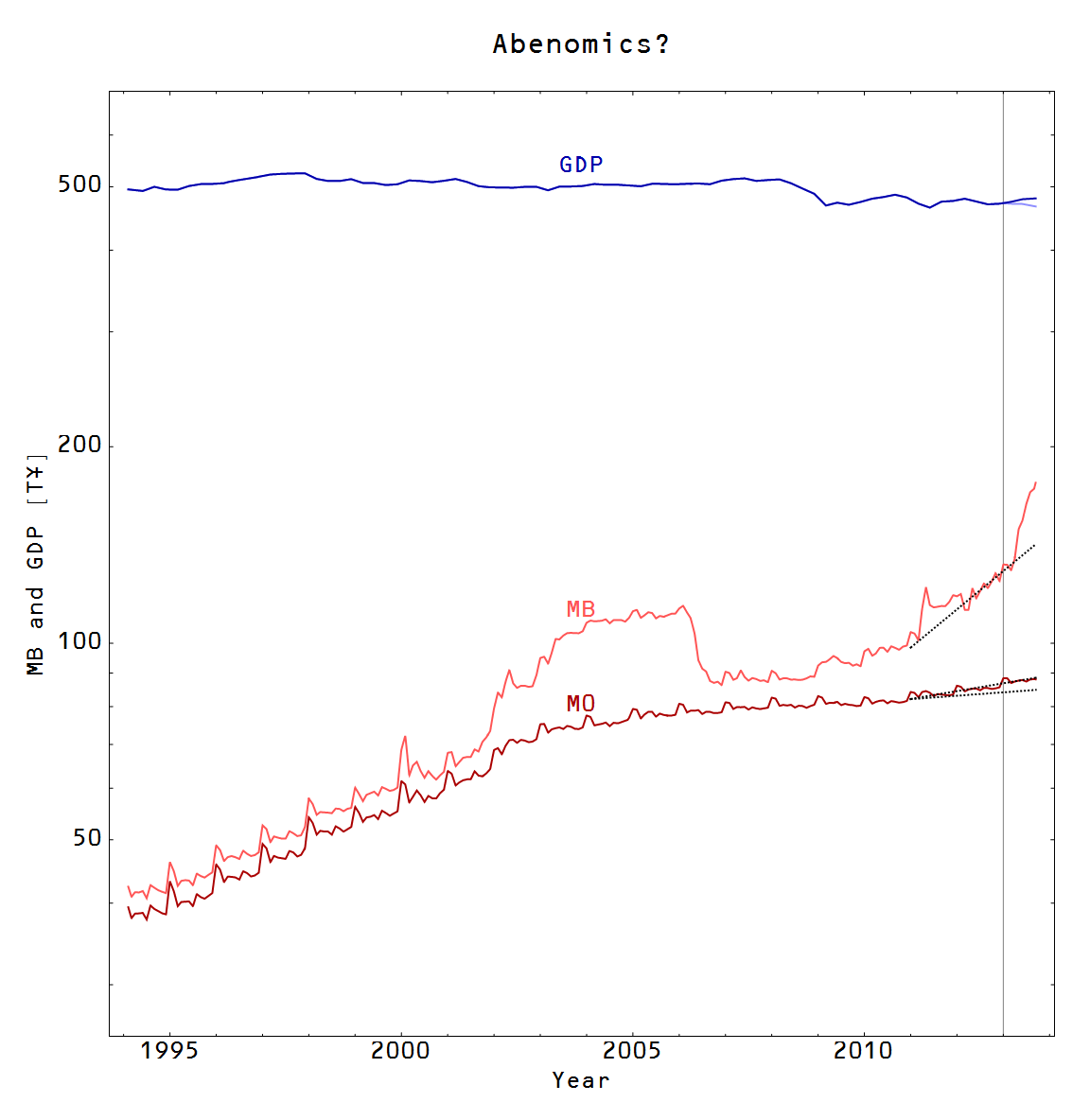 Abe announced his economic program in 2013 (gray vertical line). The baselines for the monetary base are shown as dotted black lines, but it appears that the higher trajectory currency component pre-dates Abe leaving only the reserve component expansion (pink line above the black dotted line) as the monetary piece of Abenomics. The fiscal component was assumed to be a 2% of GDP spending program initiated in Jan 2013 and continuing through the entire year. The change in government spending component of nominal GDP moves the light blue line (counterfactual GDP without Abe) up to the dark blue line (actual GDP). 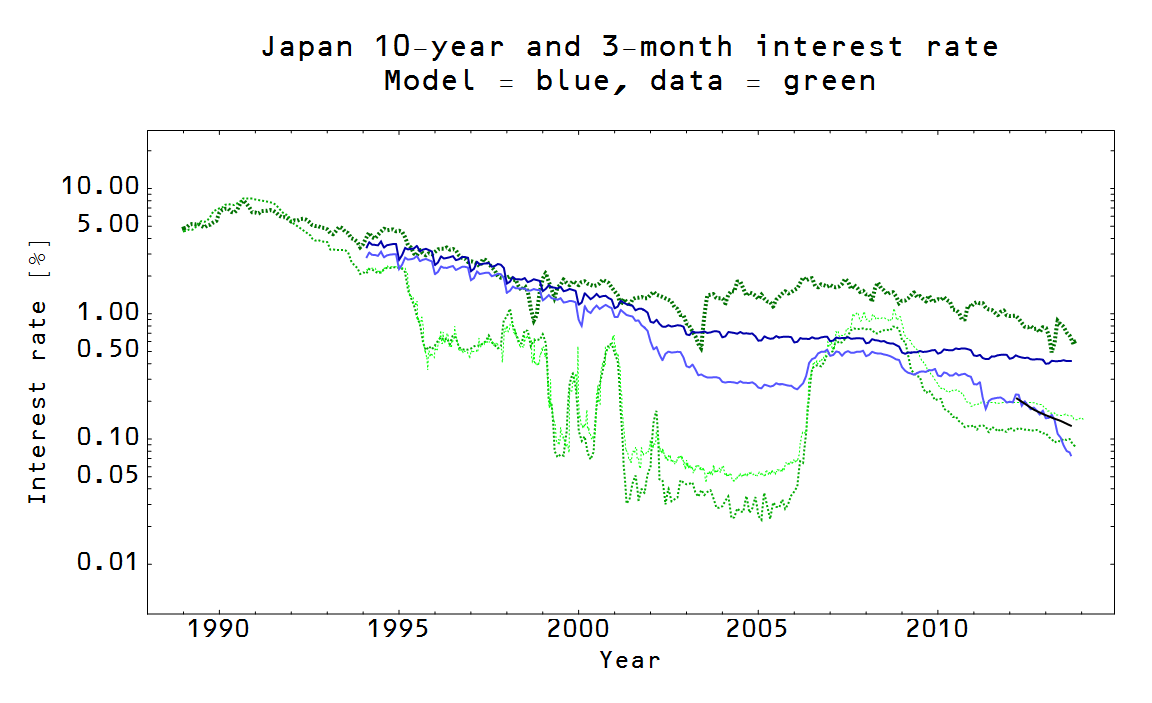 The empirical interest data is in green (long run/10 year = dark green, short run/3 month/1 month LIBOR = lighter greens). The model results are in blue (M0/long run = dark blue, MB/short run = light blue) and you can plainly see that the results aren't quite as good as the US model as I mentioned above. Abenomics enters only through the MB (short run interest rates), so according to the model should have pushed short term interest rates down relative to the counterfactual (black line). Quantitatively, the effect seems to be swamped by the error in the model, however there doesn't seem to be much qualitative shift in short term rates either. Status: inconclusive. 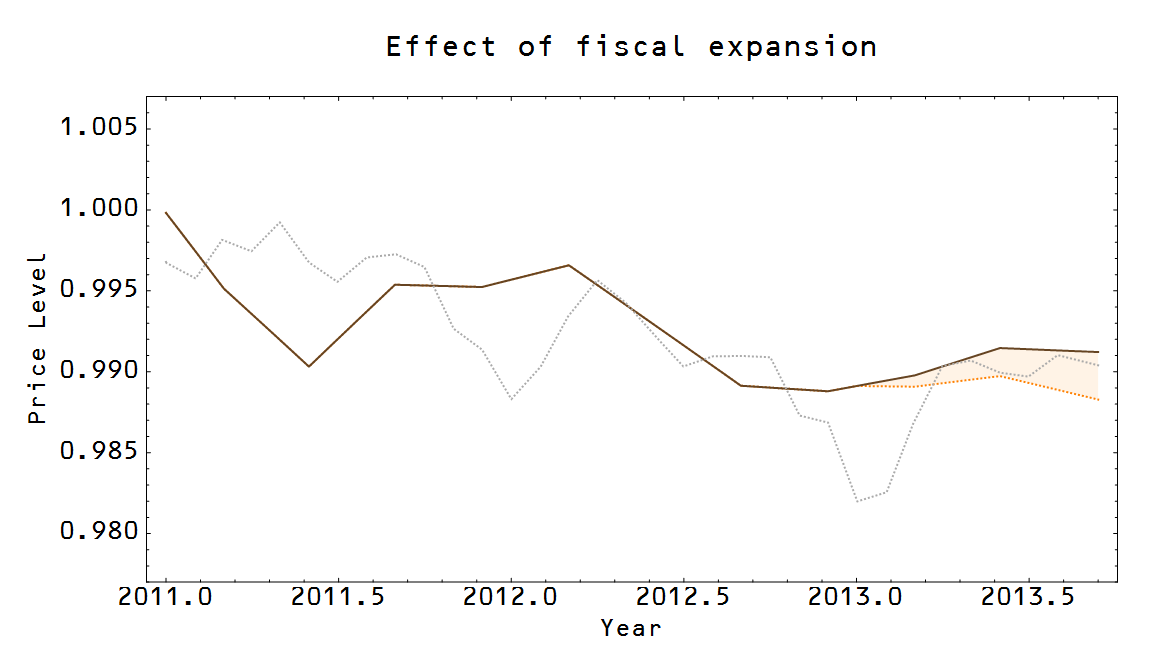 We can see that the fiscal stimulus more kept the price level from falling than boosting it, but it appears to have had an impact. In fact, if we look at the inflation rate, we can see it boosted inflation by about 0.2 percentage points (counterfactual is again in orange, data in gray and model in brown): 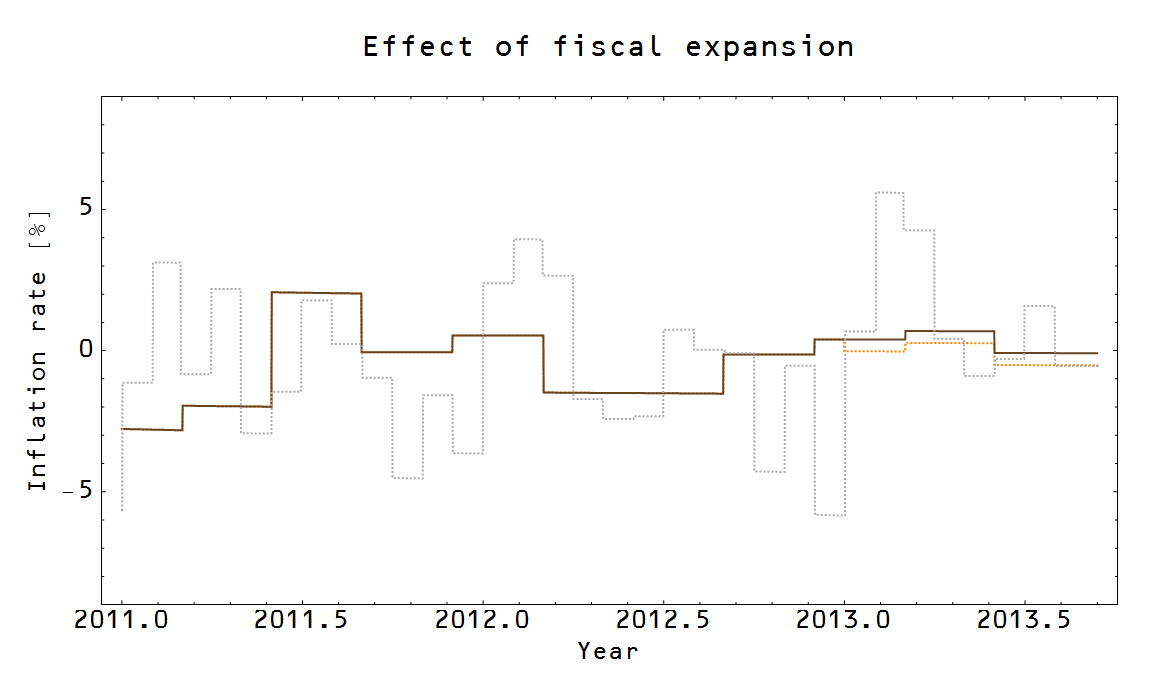 Overall these effects still seem to be swamped by empirical and model error. I'd say it's still pretty inconclusive.

For Abenomics overall, inconclusive seems to be the operative word.
Posted by Jason Smith at 11:10 AM