David Glasner intrigued me with this thought:


My own view is actually a bit more guarded. I think that “sticky wages” is simply a name that we apply to a problematic phenomenon for which we still haven’t found a really satisfactory explanation for.


I'd like to take a stab at an explanation after first discussing sticky wages in the information transfer model (based on this post), especially in the context of Roger Farmer's post mentioned in Glasner's. Here is the picture of the average wage during the depression based on Farmer's data (dotted red), FRED data (red), CPI data from FRED (blue) and the ratio of NGDP/L (black, where L is the labor supply): 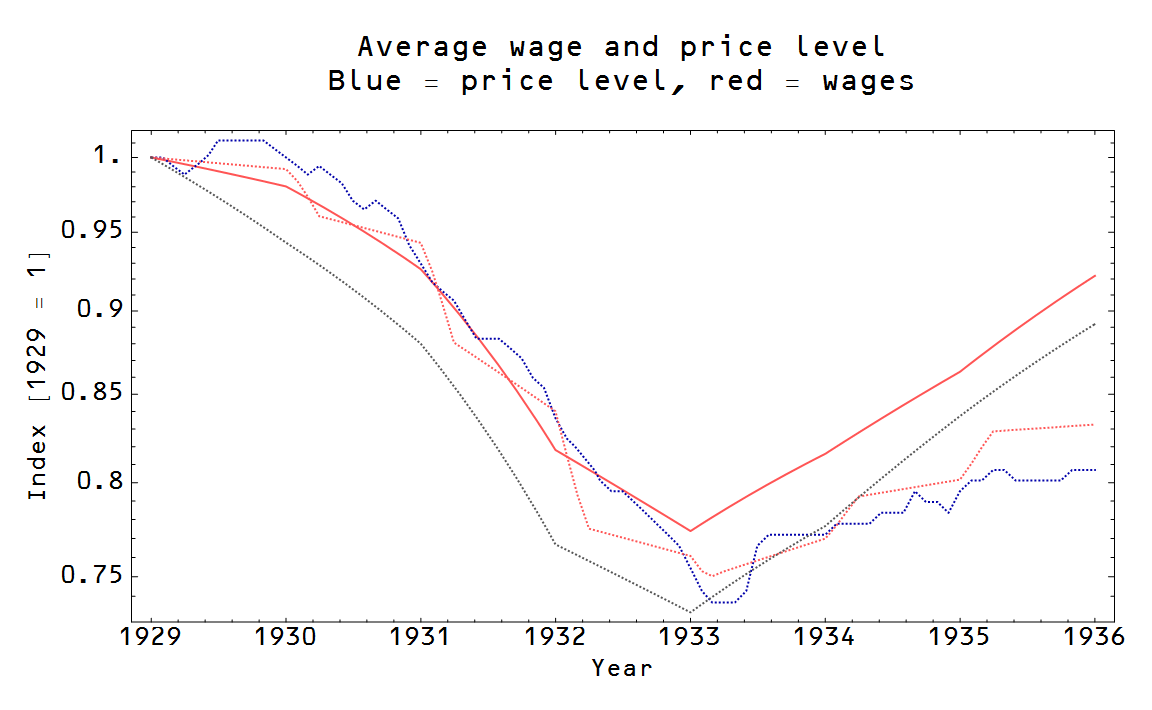 Purportedly, the fact that NW/L follows the price level P implies that wages in the Depression were flexible (NW = total nominal wages and L = total employees, or the labor supply). The use of an average wage brings up distributional issues. The average wage could be falling due to falling inequality, nominal wage cuts, or some combination of these. Wiping out Wall Street and flexible nominal wages are two completely different mechanisms that both show up as a falling average nominal wage.


But I agree with Farmer that average nominal wage should fall along with the price level! It just doesn't necessarily mean that wages are flexible. Total nominal wages are proportional to NGDP so if NW/L ~ P then NGDP/L ~ P. Can we use this to say employees are taking a nominal GDP cut? The fact that NW/L ~ P more likely derives from NGDP/NW ~ constant [1] than simply nominal wage flexibility.


This analysis in the information transfer framework looks like this. If NGDP/L ~ P in the labor market and NGDP/NW ~ c in the wage market, then NW/L = (NGDP/c)/(NGDP/P) = P/c. [2] A market with a constant price isn't really transferring dynamic information, so information from aggregate demand is being registered in the number of employees, not their wages. Additionally, NGDP/L ~ P leads to (a form of) Okun's law relating the change in RGDP to the change in employment. Here are those two markets (the constant red line indicates that wages are sticky, while the number of employees is not, the black line following the blue price level curve): 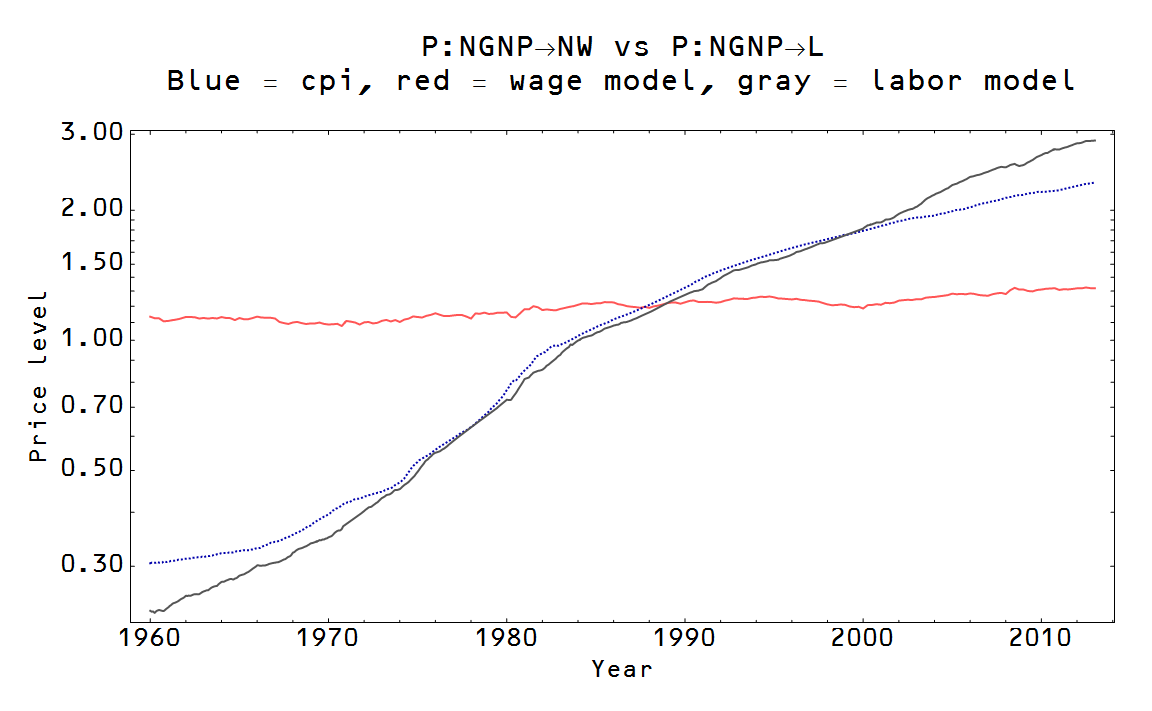 However, there is some nominal wage flexibility (or other effects) as indicated by the fact that the labor market does not capture all of the information; if we look at the difference between the model and the price level we can see that in fact there was a lot more nominal wage flexibility (or other effects) during the depression (right graph below) than, say, the 1980s (the center of the left graph below):

Now Glasner and Farmer are economists, and I am not. I'm not even using "economics" as such to analyze sticky wages. But maybe information theory can help find that explanation of sticky wages. It appears that the market for the number of employees is transferring dynamic information -- that the economy responds to NGDP shocks by laying off employees rather than reducing their wages. This means that a market has been set up to transfer information from aggregate demand to the labor supply, but not wages. How did this market get set up?

Potentially it is self-organized around the principles Glasner lays out here. But it seems that given the history of unemployment -- where the unemployed were hanged -- there would be a strong incentive for individuals being laid off to negotiate a lower wage. There could be a coordination failure in this scenario since each person designated to be let go would have to negotiate a lower wage such that total of the wage cuts equalled the amount needed to keep the factory profitable.

How does the morale picture fit historically? When your job could save you from the gallows, employers had significant power and little reason to worry about morale (especially in bad economic times when other jobs were scarce). If the boss wanted wage cuts, the boss got wage cuts. If you had a problem with that, you could be summarily fired. Remember, unemployment began in a time when there weren't any labor laws and little concern for the well-being of employees. Their morale would be low down on the list of concerns when unemployment first became a social problem.

My attempt at an explanation derives from the fact that early wage labor was piece work. You sewed a shirt and you got paid for each shirt you made. This not only provided an excellent metric for determining who was performing worst, hence who to lay off in a downturn, but forced an employer to lay off people, not reduce their wages. If you were still an employee, you could still make shirts and expect to be paid. As piece-work wage labor expanded, social systems started to form that catered to laid-off employees, beginning with workhouses -- effectively accepting a 100% nominal wage cut for room and board. As this custom of layoffs becomes entrenched, even salaried employees would be shown the door rather than given the opportunity to renegotiate their salary (especially given the coordination problem above). Today we are stuck with an information transfer system where the aggregate demand sends signals that are captured by the labor supply, not nominal wages.

[1] It is constant relative to a slowly varying function of the economy like the price level. In fact, it is more constant than the employment-population ratio

[2] Note that if things were the other way around where NGDP/L ~ c in the labor market and NGDP/NW ~ P in the wage market, then NW/L = (NGDP/P)/(NGDP/c) = c/P and the average nominal wage would rise with a falling price level.