Monetary Abenomics has not generated inflation

The data suggests that the new BOJ policy has raised inflation, and inflation expectations.  There is a mountain of evidence on that point.

I am skeptical that the "evidence" shows what Sumner and Nunes claim it shows. Why? Because my model shows the exact same rise in inflation (the red line is the core inflation cited by Sumner and graphed by Nunes): 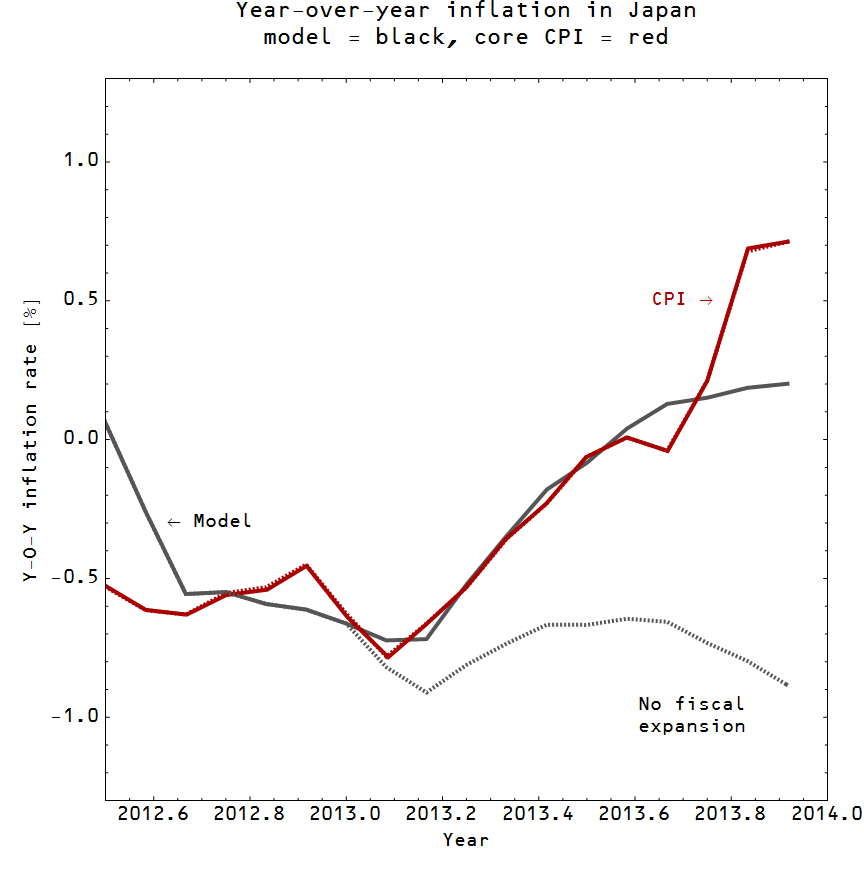 Wait, because I get the same inflation out of the model I say that their claim is unfounded? You heard me right. You see, the model I am using assumes no impact from monetary policy under Abenomics. Basically, you'd see almost the same rise in inflation without the QE under Abenomics. The graph also suggests that the inflation was a result of the fiscal expansion under Abenomics -- it is important to note that model result (which is a function of NGDP and the monetary base) doesn't depend on the fiscal counterfactual (which involves a guess about NGDP without fiscal expansion). But if you assume naively that NGDP' = NGDP + ΔG from Abenomics, then you can account for almost the entire rise in inflation.

Let's start with the model: it's pretty good (better than anything I've ever seen), but not perfect. Here is the price level: 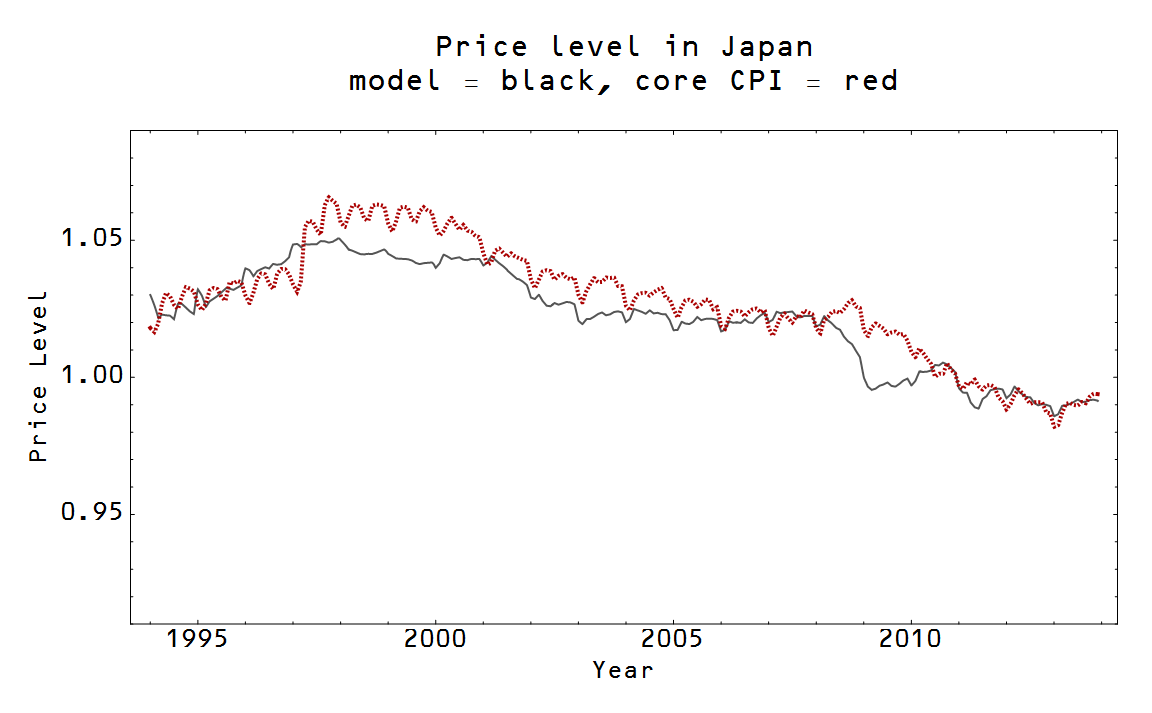 Those seasonal fluctuations wreak havoc on the derivative of the price level (inflation). There are a couple of ways economists deal with this. One is to subtract out the seasonal fluctuations -- this involves a model and requires essentially a stable background which makes looking at changes in the background difficult, especially over a short time scale. Another is to look at year-over-year inflation rate. It assumes that monthly measurements should be at the same point in the annual cycle each year, and via the mean value theorem, YOY represents an annual average of the inflation rate. This is the inflation rate used in the graph by Nunes as well as in the graph at the top of this post (it is derived from the same 'core-core' CPI data set).

Using YOY already produces some issues. For example, the first points after Abenomics supposedly begins at the start of 2013 where inflation starts to take off represent an average over several months before Abenomics begins! Another issue is that YOY is very sensitive to data error, especially when your derivative is small (and the result you're after is down in the noise) because it depend on only two data points. In this graph, I show both the derivative (dashed) and the YOY average (solid): 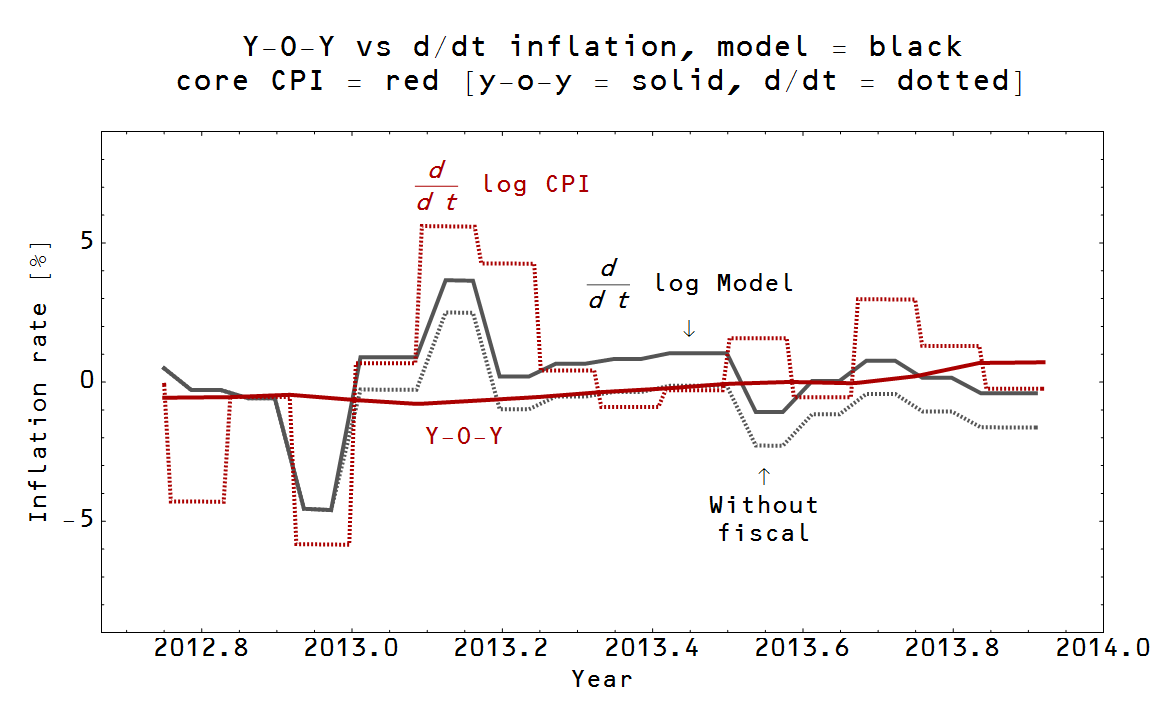 You can see that the derivative is much noisier, but you can also see that the YOY average is way down in the noise and is equivalent to a smoothing of the derivative data. How much would you trust someone who said they smoothed the dotted red curve to the solid red curve and claimed the small rise (on this scale) is significant? This is not to say it is wrong! It's just way too early to tell.

The noisy data, model dependence and general uncertainty all become more apparent when you look at the longer run: 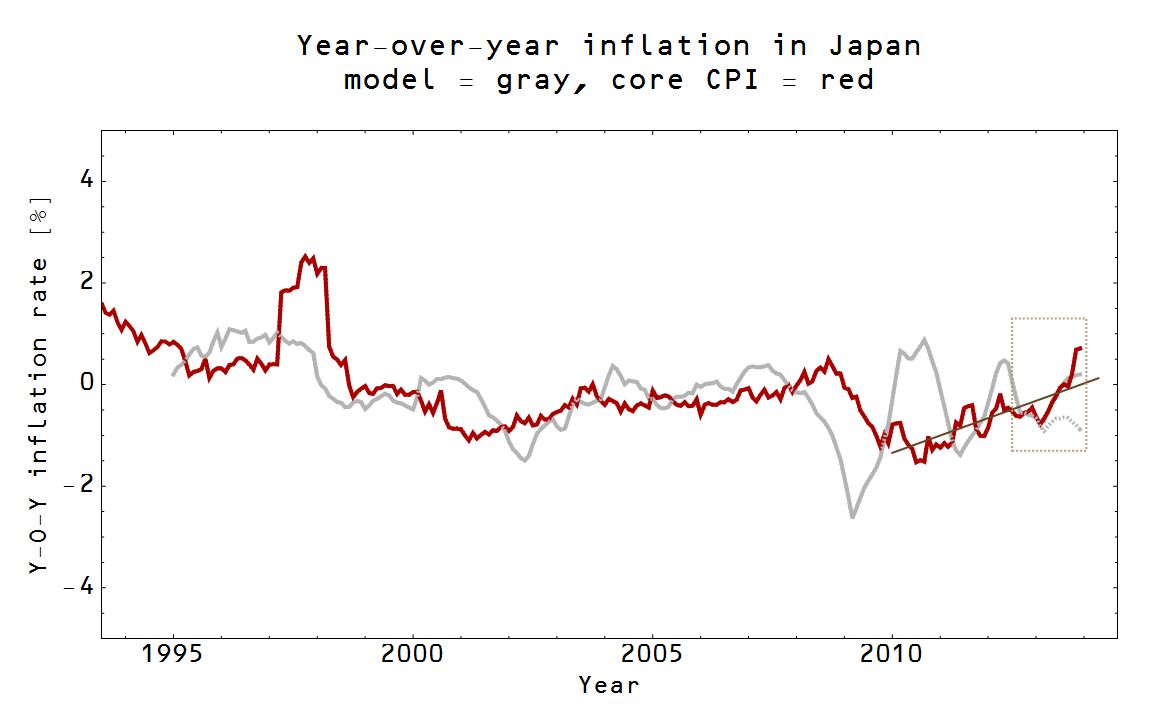 The graph at the top of this post is inside the box. You can see that both the model error as well as the measurement error are significant compared to the size of the effect we're supposed to be seeing. It is even more problematic when you consider what else we're supposed to be swallowing. The market monetarist view requires fiscal policy to have negligible impact, and has no numerical estimate for the actual rise. Not only does the rather simplistic model I'm using give you a numerical estimate consistent with the observed rise in inflation without changes in monetary policy, the addition of a naive model of the impact of fiscal policy is sufficient to account for the entire recent rise in inflation over the 20-year deflationary trend. The model I'm using was also created before we had data from 2013 and works for other countries.

And if that wasn't enough, the recent rise over the low at the start of 2013 is perfectly in line with linear trend that begins in 2010 (shown in the graph), two full years before Abe takes office.
Posted by Jason Smith at 1:44 PM