Did the Fed offset the ARRA?

In the previous post, I looked at the effect of the ARRA. Now there exist claims of "monetary offset", i.e. that the Fed didn't do as much monetary expansion as would have happened if there was no stimulus, negating all or part of the effect of the stimulus.

This claim is strongly dependent on the counterfactual path of monetary policy, but I plan to address it indirectly by asking how much would the Fed have to do to either negate (offset) the ARRA completely or supplant it (i.e. produce an effect equal to the ARRA in its absence). This analysis boils down to: No, the Fed didn't offset the ARRA -- the ARRA had the effect I show in my previous post (reducing unemployment by about 2.5%, and otherwise having an effect comparable to other estimates of the impact), and Ramesh Ponnuru is incorrect.

Update 9/30/2014: In the following I refer to the "monetary base", but I am ignoring central bank reserves (i.e. this is the currency component of the monetary base).

First I will look at the "money channel", which is the impact of monetary policy on the price level. This is based on the Fed's implicit inflation target. In the graph I show the paths of the monetary policy that would offset the ARRA (dotted) or supplant it (dashed): 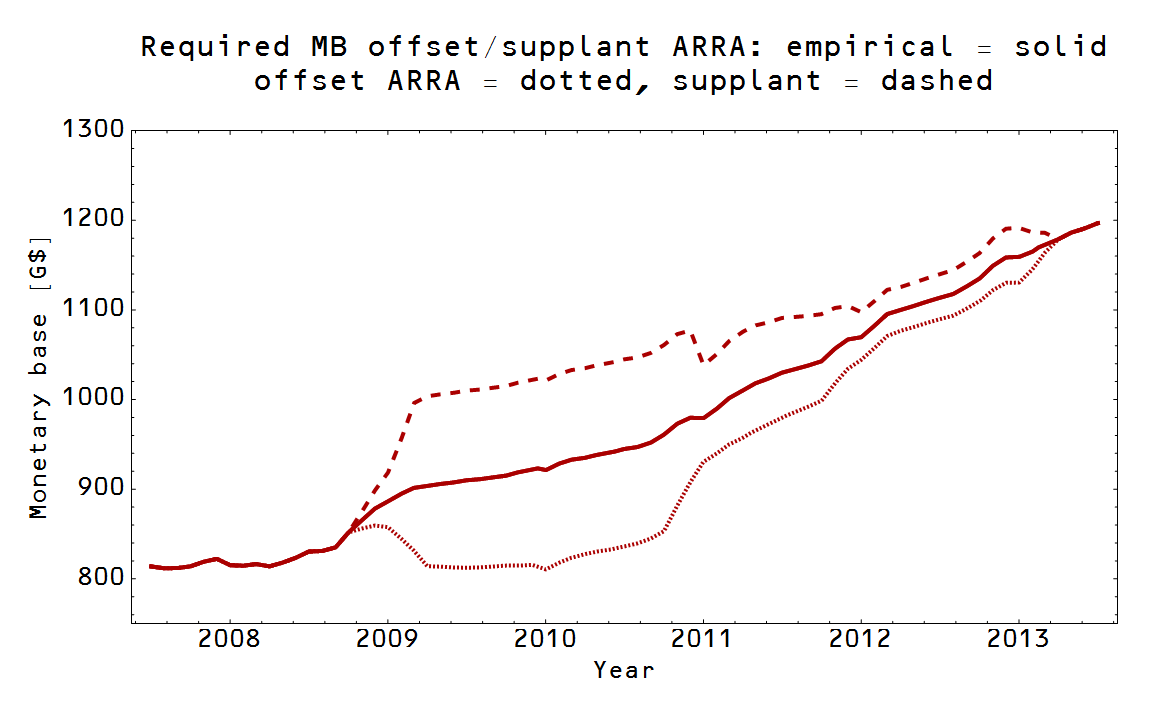 The actual path taken appears as a solid red curve. Now, how do we interpret this graph? Since we don't really know what the counterfactual would have been without the ARRA, all we can do is look at the size of the adjustments required and realize they are enormous. It's a reductio ad absurdum arugment: the Fed would have had to keep the base constant at $800 billion or raise it by 20% relative to that constant. In reality, the Fed raised the base by about 10% relative to the $800 billion, but it is impossible to say what the Fed would have done without the ARRA. It would be some path between the dotted and dashed line, but we can't know where exactly.

This argument might be a little clearer when we look at the "interest rate channel" (i.e. the Fed raising interest rates to offset the ARRA or lowering them to achieve the same stimulus as the ARRA). This is based on the Fed's explicit interest rate targets. I previously used the IS-LM model to estimate this effect here using a IS-curve slope ~1. In the graph I show the paths of the monetary policy that would offset the ARRA (dotted) or supplant it (dashed): 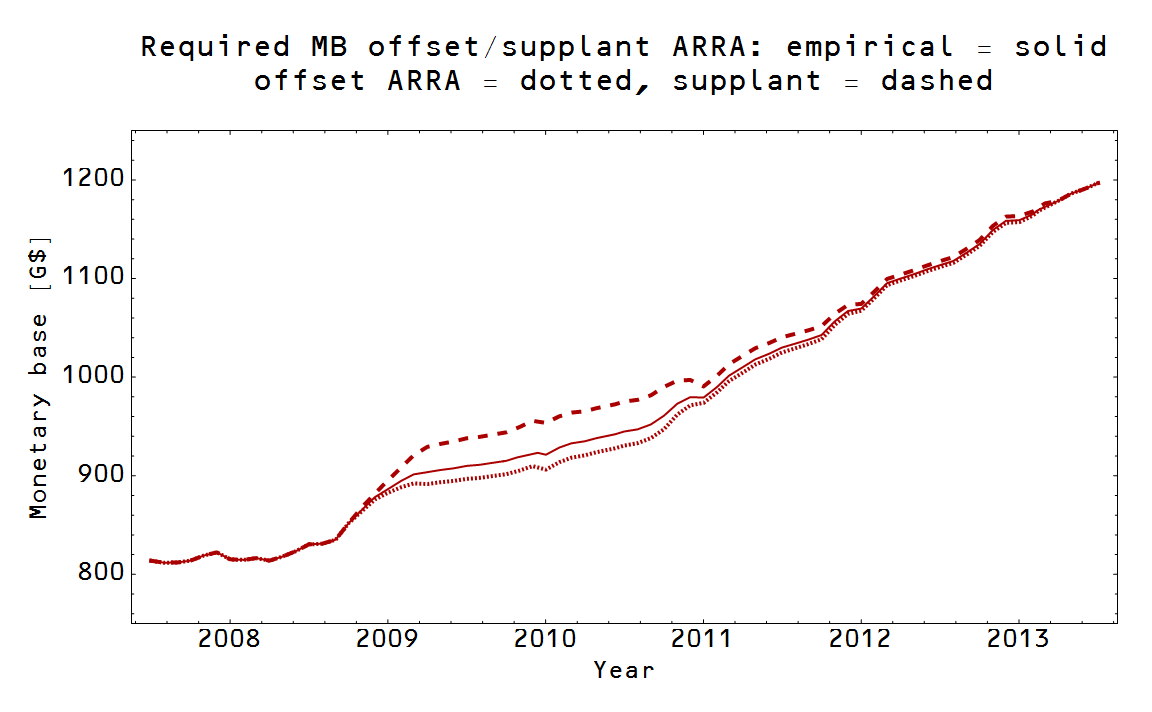 The actual path taken again appears as a solid red curve. Here, the Fed doesn't have to make as heroic an effort. In fact, it appears likely that the Fed moved enough (i.e. refrained from lowering rates enough) in the interest rate channel to offset the effect of the ARRA -- but in that channel only. Essentially, in the IS-LM market, the delta G was offset by a delta M. In the counterfactual universe without the ARRA, we might have expected the Fed to have done more [1].

The Fed likely "offset" the entire IS-LM market effect, which makes the analysis in the previous post more accurate since it ignored the interest rate channel [2], showing results for the price level only. Since the monetary policy and fiscal policy were both attempting to improve the economy, the Fed would have done more in the absence of the ARRA, but the effect in this channel would likely have been the same in the two cases (the Fed acts in a universe with the ARRA vs the Fed acts in a universe without the ARRA). The Fed might have lowered interest rates more, but that would have produced the same results as the Fed lowering interest rates less coupled with the ARRA.

[2] I looked at how the ARRA increased interest rates (crowding out) in the previous post, but did not translate that increase into a negative effect on output.
Posted by Jason Smith at 6:36 PM