The IS-LM model as an effective theory at low inflation

No one seems to like the poor old IS-LM model except Paul Krugman. I thought I'd defend it as an effective macro theory. What does that mean? It means it is a theory that operates given a certain scope. For IS-LM, assuming the IT model is the "true" theory, that scope is low inflation. Here's how it works:

Start with the AD-AS model (with aggregate demand aka nominal output N and aggregate supply S), and introduce money (M)

The produces an information equilibrium relationship


The P just names the abstract price (the price level) and the above notation means:

We can solve this differential equation to obtain:


so that inflation π ≈ 0 (another way of stating our scope condition [1]). If inflation is "small", then


where MB is the monetary base, p is the abstract price of money and i is the nominal (short term) interest rate. If π ≈ 0, then we can write this as:


using N ~ Y and i ~ r where r is the real interest rate. The differential equations associated with this pair of information equilibrium relationships has a similar solution in general equilibrium to the one above, but I'll write it differently:


Now which variables do you think will react the fastest to monetary expansion? I'd go with the monetary base and the interest rate, rather than real output. That puts us on the partial equilibrium solution where Y "moves last" (in economics parlance). In physics terms, this is analogous to an isothermal expansion of an ideal gas (an 'iso-output' expansion of an economy) that looks like this: 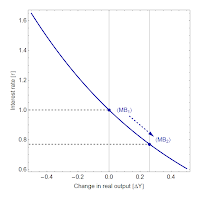 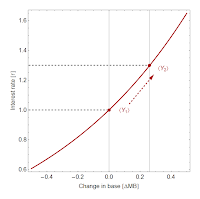 The interest rate falls and the monetary base expands from MB₁ to MB₂. Note at this level of effective theory, it is not important which one causes the other one -- increasing the base lowers interest rates or lowering interest rates expands the base. As Y rises, interest rates will come back up and equation (1) will hold -- general equilibrium restored.

What about fiscal policy? That's the second diagram above. In that case, the central bank "moves last". Fiscal expansion should take us from Y₁ to Y₂, but if the central bank didn't let rates rise or the base expand, you could end up back where you started. This is the basic monetary offset picture that happens when inflation is low and nominal (and real) interest rates are positive.

That captures most of the mechanics of the IS-LM model; you could rewrite this in terms of investment if you wanted (as I do here). And there is a bit more to the details of how it works, but the theories are roughly isomorphic to each other.

Paul Krugman points out in the liquidity trap argument everything changes at the zero lower bound (or basically, anytime interest rates are very low ... remember we're still in a limit where inflation is very low as well). This is the limit where r ≈ 0⁺. Here we have a different-looking pair of diagrams: 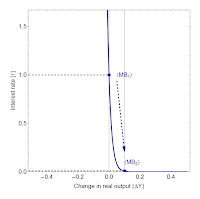 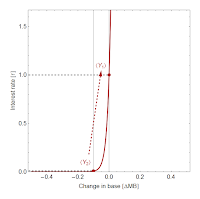 The general idea is the same, but the magnitudes are very different. A large expansion of the base drops your interest rate to zero without moving output very far to the right (monetary expansion is ineffective). A large fiscal expansion can happen without large movement in the monetary base (i.e. monetary offset doesn't work). In this case, we have a model that captures the essence of the liquidity trap.

And since the above model does pretty well empirically (see the paper or the forecasts), it means that any theory that describes the data (when π ≈ 0) will also be approximated by the IS-LM model.