There was an uptick in inflation with the January 2016 numbers that some have considered to be noteworthy (e.g. here -- although that is a year-over-year measure, that John Handley takes on here -- that it's most likely due to the very low Jan 2015 number).

I wanted to see if it had something to do with seasonal adjustment (since this was floated as an explanation of why the Q1 GDP has been so low -- q.v. here). CPI inflation shows the same jump (see my table I've been comparing to the IT model here) and unlike PCE has both seasonally adjusted and unadjusted data on FRED. Here are the differences:

One thing that jumps out is that the Great Recession appears to have changed how seasons work. Here are all the months, warmer months (northern hemisphere) in reds, colder months in blues: 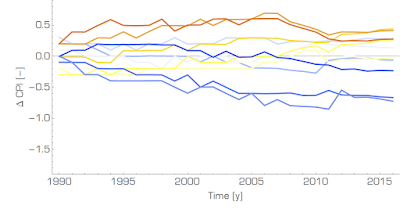 There is no particular reason that this affects January more than other months -- actually January is one of the few months that wasn't strongly affected by the Great Recession. Maybe the January CPI number isn't big -- it's just that the other monthly numbers got small.
Posted by Jason Smith at 5:52 PM