I figured since I made fun of John Cochrane's defense of Jeb Bush's claim of 4% growth, I should maintain some balance and make fun of Bernie Sanders' economic proposals (see e.g. here or here). From the second link, we can get derive an estimate of the projected civilian labor force (CLF) and use the "quantity theory of labor" model to estimate the NGDP growth we'd expect. While the Sanders version only says NGDP growth would be 8.7% 5.3%, the labor force increases would actually imply an even higher NGDP growth of 10.5% (averaged over 2016-2026): 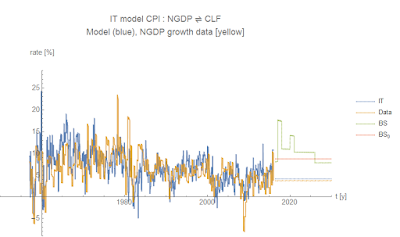 The dotted lines are the log-linear extrapolations for the IT model (blue) and the data (yellow), the projection based on the CLF figures derived from the Sanders campaign (green, BS) as well as the NGDP number of 5.3% from the campaign (red, BS₀). Note that this model also implies inflation would be 7.9% (and therefore average real growth would be 2.7%).

I read the 5.3% as a nominal growth figure (you can see why I'd make such a mistake!); nominal growth in Gerald Friedman's projection to 2026 is more like 8.7% (to 43 trillion from 18 trillion) -- and therefore 3.4% inflation. Disregard the red line in the above graph. Edited the above post to reflect this.

Here is some good commentary at EconoSpeak on the projections themselves.