I spent the past week on Twitter putting up a list of my favorite posts on the blog as a kind of Irish wake for the form for the blog's 8th anniversary. As is typical on these anniversaries, a bit of statistical analysis or visualization — this time, the years of the selected favorites: 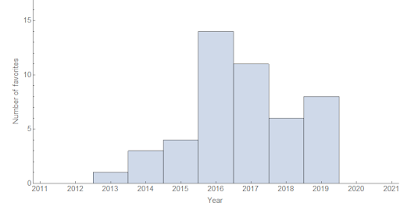 Looks like 2016-2017 was my peak by the number in my own opinion. It's not just bias by the quantity of posts, either. The most prolific year was 2015 with an average rate of a post per day. Favorites per total number has been increasing steadily — at least in terms of my own opinion, quality has been rising: 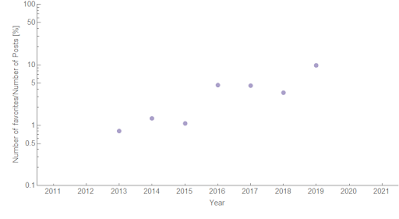 "It's people. The economy is made out of people."

"Can a macro model be good for policy, but not for forecasting?"

"Remarkable recovery regularity and other observations"

"A Solow Paradox for the Industrial Revolution"

"Macro criticism, but not that kind"

"Things that changed in the 90s"

"The economic state space: a mini-seminar"

"My introductory chapter on economics"

"What mathematical theory is for"

"The Phillips curve and The Narrative"

"The irony of Paul Romer's mathiness"

"Should the left engage with neoclassical economics?"

"Efficient markets and the Challenger disaster"

"The irony of microfoundations fundamentalism"

"What if money was made of vinegar?"

"The 'quantity theory of labor' and dynamic equilibrium"

"No one saw this coming: Bezemer's misleading paper" ("Letter to Dirk Bezemer")

"Is the market intelligent?"

"Wage growth in NY and PA"

"Exploration of an abstract space: prices, money, and ... ships at sea?"

"Efficient markets and the Challenger disaster"