What's up with NGDP?

Scott Sumner has a post up where he makes the (very interesting from a philosophical standpoint) claim that the recession was caused by the Fed deciding to keep NGDP growth at a constant 4-4.5% per year from 2009-2016, hence likely raising rates in 2015. Problematic causality aside (which arises from causality-violating effects of expectations), I wanted to address a related question:

Why is NGDP growth what it is? This is partially related to Noah Smith's critique of macro where what you call a fluctuation is in some sense a free parameter.

Some people might look at recent growth level and see that a linear extrapolation from the early 2000s, with a bubble along the way that pops in 2008: 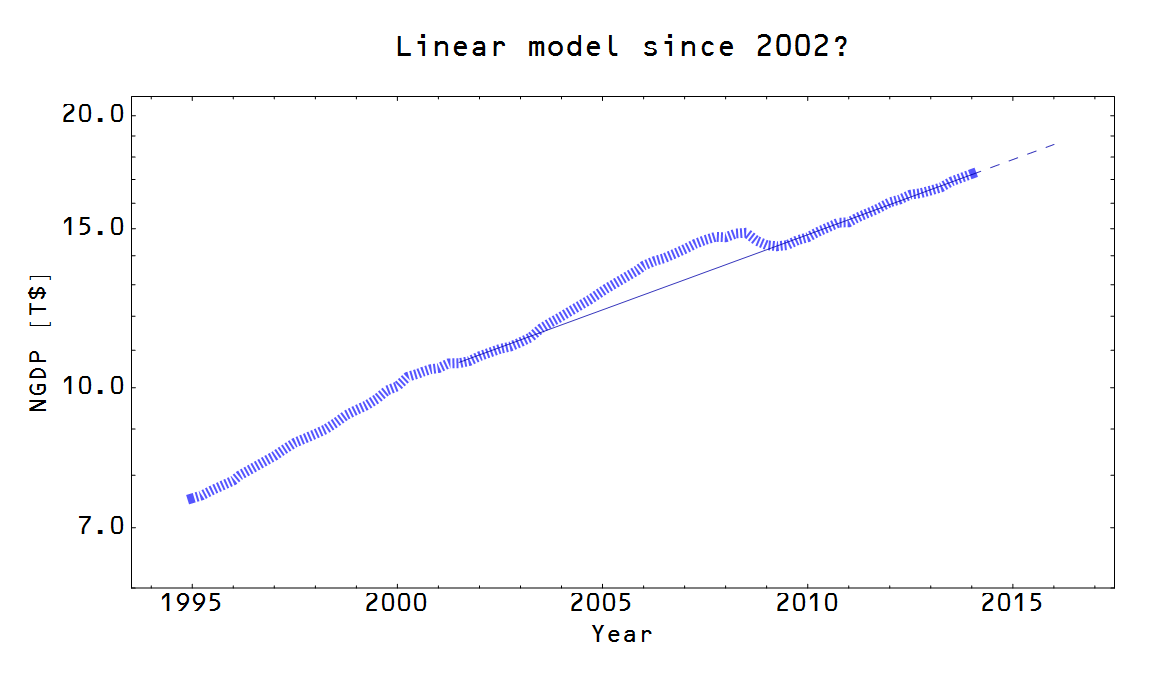 But what about earlier growth? Well, maybe there is a longer term trend towards lower growth ... here is a quadratic fit and you can see the tech boom and the so-called housing boom: 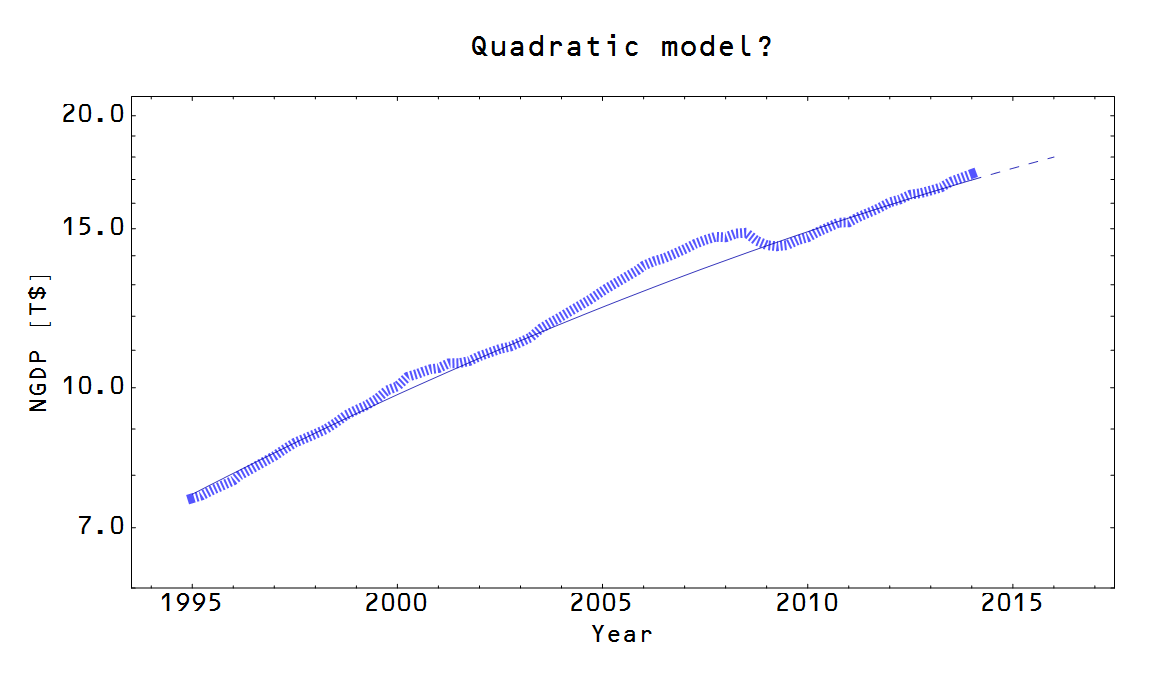 Monetary economists (like Sumner) tend to believe the rate of NGDP growth is for the most part what the monetary authority wants it to be. This could make sense if you look at the first graph, but it seems strange if you look at the second. Has the Fed become more pessimistic over time about the growth prospects of the US? Also, looking at the first graph, it seems interesting that the post-2008 growth rate matches up with a brief period before the "housing boom". Is the Fed targeting a growth rate that happened for a couple of years in the early 2000s (and nowhere else in the history of NGDP)?

There's an additional way to look at the data -- each of these booms over the past seem to involve decreasing growth rates shown as a set of log-linear fits: 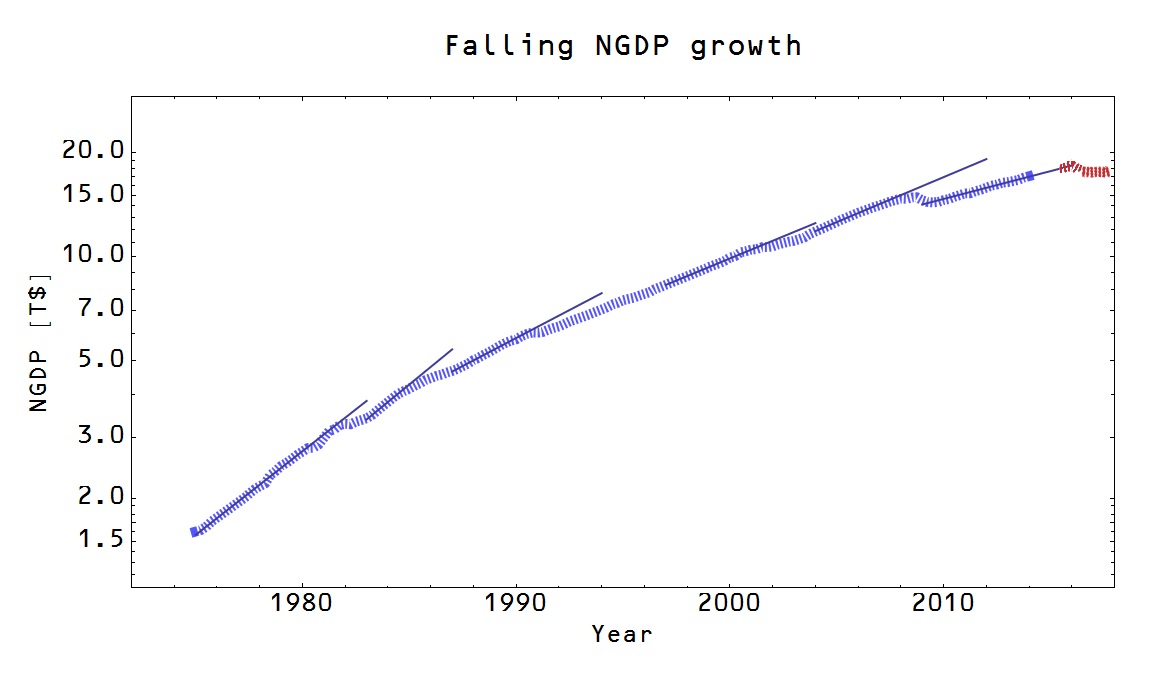 However! Not only do the boom periods seem to have decreasing growth rates over time, so do the lulls between the booms! This could imply that our current path might undergo a correction towards an even slower rate of growth at some point in the future (shown in red). This is a picture of an underlying sustainable rate of NGDP growth that is slowing down, and any monetary policy that attempts to target earlier rates is doomed to become "too loose" resulting in an eventual downward correction. This is also the picture of the secular stagnation discussed by Larry Summers and Paul Krugman (among others).

This view also poses serious problems for macroeconomics in general -- why would nominal economic growth peter out over time in a country with increasing population? Will it take off again? Will it go to zero? Less than zero? If the population is increasing, you'd expect non-zero real growth. This means that you'd have to have deflation in order to reconcile zero NGDP growth with positive RGDP growth.

The information transfer model predicts Japan-style lost decades (persistent liquidity traps) in this scenario. The only way I've seen so far to escape is a bout of hyperinflation, however Japan has lived with this scenario for 20 years so maybe it'll be all right? In the "information trap" scenario, monetary policy ceases to be a useful method of macroeconomic stabilization and inflation becomes almost meaningless. It's a liberal utopia! Macro stabilization through fiscal policy! No one takes inflation hawks seriously, money illusion goes away, and no more fighting to keep means-tested benefits in pace with inflation.

Of course, this could all just be a lack of informative macro data coupled with the common human cognitive bias towards believing you exist in a meaningful time. There are only a few events of falling NGDP in the well-documented post-war period. Maybe it will all go away and the long run really is a log linear function.
Posted by Jason Smith at 11:16 AM