Now, one can argue that things would have been much worse in the absence of this massive infrastructural spending, but as Kaminska goes on to note, Japan didn’t lose monetary policy traction until much later. In fact the BOJ’s call rate didn’t really hit the zero lower bound until March 1999.

That's the crux of it, isn't it? The monetarist argument is as coherent as the Keynesian argument, so assuming the each side isn't comprised of morons one could argue that things would have been the same or worse (or better!) minus the massive spending by the Japanese government. It's all angels on the head of a pin without a model, though. You need to know that counterfactual. And in order to know the counterfactual, you have to be able to decompose the impact of monetary policy and the impact of fiscal policy.

Let me call up a previous post (and the relevant graph, updated with a red dashed line at a constant interest rate ~ 5%): 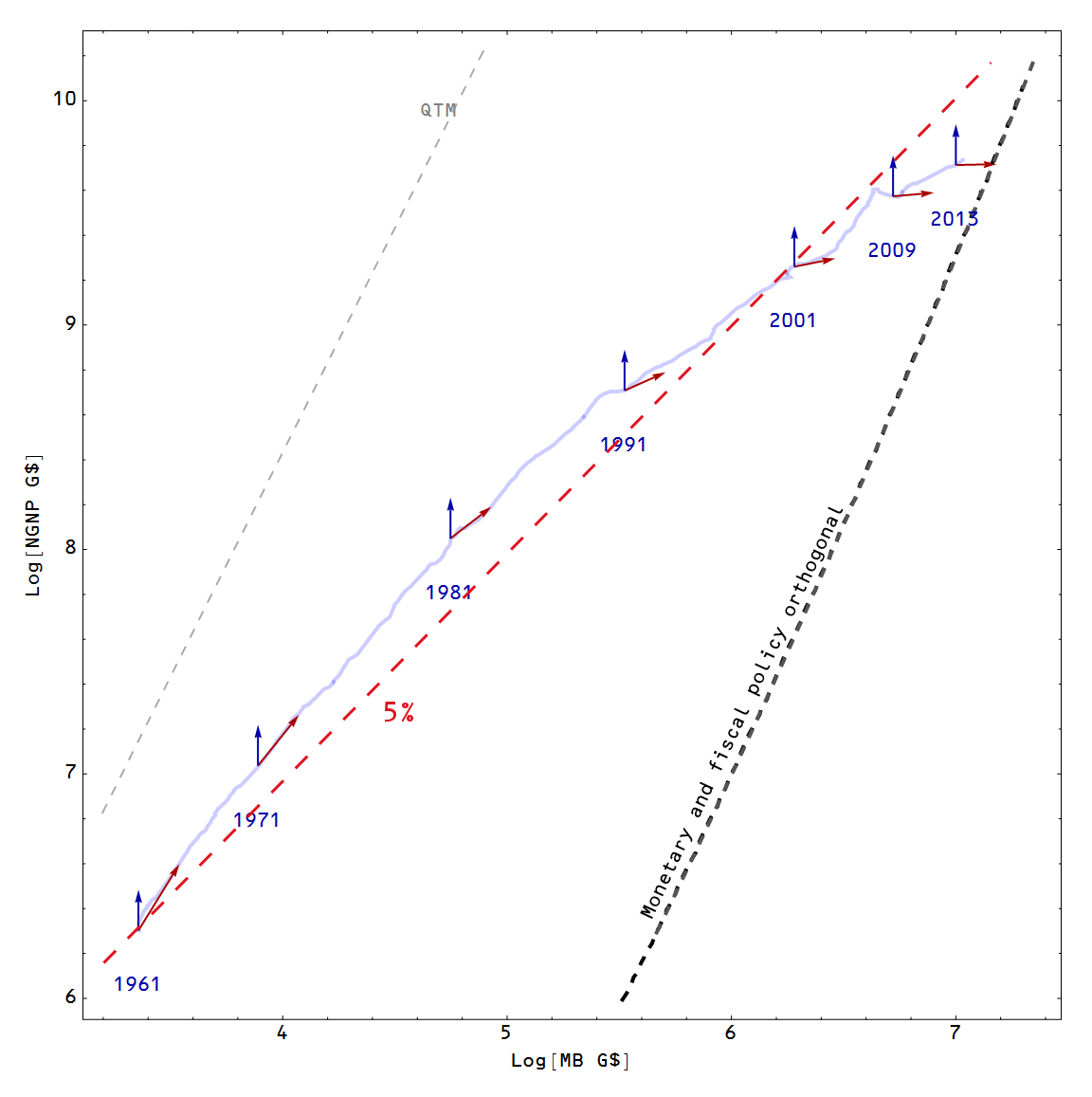 The graph shows the impact of an equal percentage increase in NGDP (blue arrows) and MB (red arrows) . For concreteness, let's say a spending package of 3% NGDP [1], or a 3% increase in the currency component of the monetary base. We'll also simplify the discussion by assuming the central bank has an inflation target (this is not an important assumption; the argument still applies if the central bank targets something else like the Fed's dual mandate of stable prices and low unemployment).

We can see in the 1960s and 70s, the vectors are not orthogonal. In this world, monetary offset exists. If the government tries to spend more money to cause inflation (blue arrow), the central bank will just make its red arrow slightly smaller (do slightly less expansion) to achieve the inflation target it wants. After the 1990s, the vectors are closer to orthogonal. The central bank has no power to offset fiscal expansion without ludicrous contraction in the base e.g. a ~ 10% decrease in the base might have offset a 3% expansion in 1991 (figure is approximate): 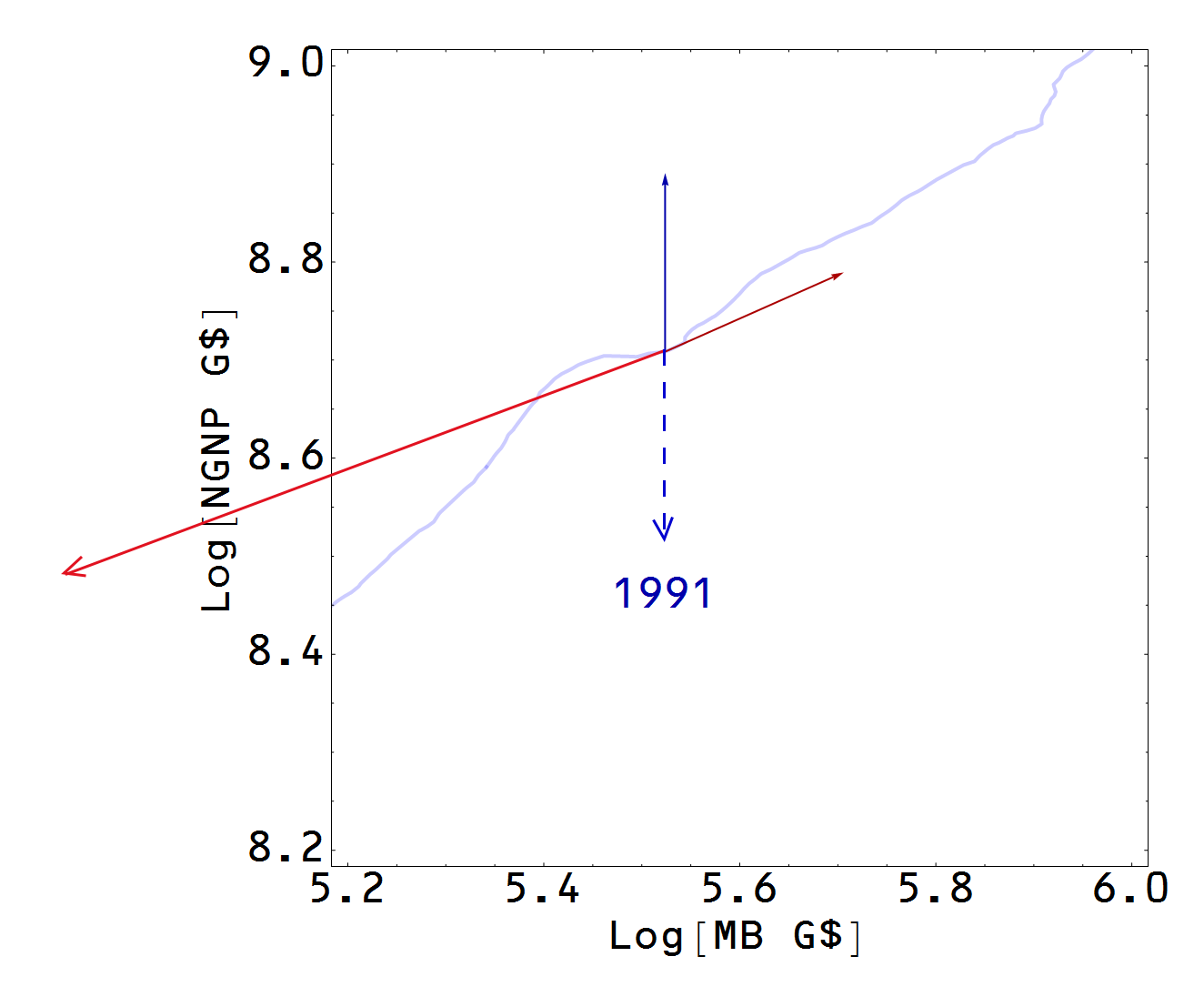 The key takeaway in this post is not the particulars of the model, but rather the capability to show counterfactuals. The information transfer model can decompose the fiscal/monetary vector. The monetarist vs Keynesian/zero lower bound debate is precisely an argument about orthogonality. Monetarists assume the fiscal vector is parallel to the monetary vector; Keynesians assume they are orthogonal at the zero lower bound [2] (Never forget! Modern Keynesians like Paul Krugman assume the vectors are parallel away from the ZLB, just like monetarists). The information transfer model makes no assumptions about being parallel or orthogonal; the relationship comes from the underlying model. The interesting contribution from the information transfer model is to say that both these views are correct ... at different ratios of MB/NGDP.

A side note on the latter part of the quote. Paul Krugman (a proponent of the theory of the zero lower bound) frequently refers to the US and EU being at the "zero lower bound" even though they technically aren't at "zero" (the Fed has an upper bound of 0.25% and the EU was at 1.75% or higher from 2008 until as recently as 2012 and is now at 0.75%). By this usage, Japan was below 1.75% starting in 1995, so the piece at the end about not really being at zero obviously misunderstands the liquidity trap argument. The basic idea behind Keynes was that there is a lower bound to interest rates below which monetary policy will fail to spur people to forego liquidity. Later, this lower bound was considered to be (always) near zero. How do we make sense of Krugman's insistence that the EU at 1.75% was at the ZLB? Because the Taylor rule (or Mankiw's rule) calls for a negative interest rate. It doesn't matter what the actual interest rate is -- actually going to zero would be dandy, but it's because the interest rate favored by a Taylor rule is negative you have a zero lower bound problem. The target interest rate is relevant, but it alone doesn't define a liquidity trap (i.e. the Fed can't set the interest rate at 1% and make the liquidity trap vanish magically).

[1] Note that NGDP = C + I + G + (X − M), so a boost in G to first order increases NGDP. The crowding out effect of government spending is included in the model.

[2] It really is an assumption in the case of monetarists. Don't believe me? Check out Scott Sumner's paper on monetary offset [pdf]. In the first figure it just assumes that it is always possible for AD increase = AD decrease. It assumes the central bank can always hit their targets. For Keynesians, the monetarist position is the assumption. The liquidity trap (orthogonal monetary and fiscal vectors) is derived from something like the IS-LM model at zero interest rate.
Posted by Jason Smith at 4:30 PM