I'm back from a way-too-short vacation and catching up on my reading. Noah Smith has a post about developments in Real Business Cycle (RBC) theories. He sums up with this:

... aggregate shocks are sometimes really hard to identify. There were the oil price shocks in the 1970s and Volcker's tightening in the early 1980s, but a lot of recessions don't seem to be externally provoked. So maybe that means there is some kind of random mass-psychological sentiment thing going on, or maybe it means that recessions are sunspots caused by the interaction of a whole bunch of frictions, and thus completely unknowable. But this network/linkage idea seems like a promising alternative to those unhappy possibilities. ... I suspect they're on to something that many have expected for a long time - the idea that economic fluctuations are the result of the complexity of economic systems.

The information transfer model (ITM) says that there is a trend based on information theory. However, we observe deviations from that trend; what causes those deviations seems to be up for grabs as far as the ITM goes right now. I personally like the idea of mass-psychological sentiment (deviations from "rational expectations") per the quote from Noah Smith. I've actually put that hypothesis forward in different forms before, but allow me to wade into some RBC theory.


A couple months ago I showed how a long run trend in NGDP vs M0 (monetary base) arises from a collection of random markets. Now identifying that long run trend is key to business cycle theory: it tells you what the cycle is! If we fit the general function in that post to the long run time series data and highlight the recessions (in red), something interesting pops out. Recessions appear to happen when NGDP gets high relative to M0 (or M0 is low relative to NGDP): 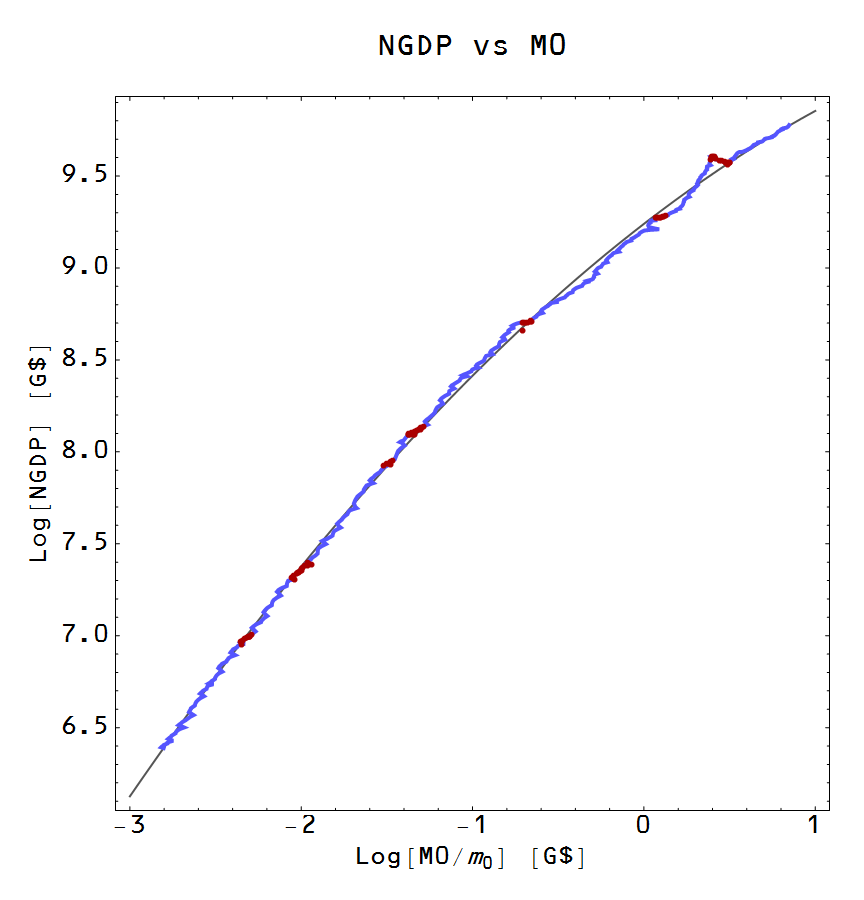 The cleanest example is the great recession, shown here zoomed in: 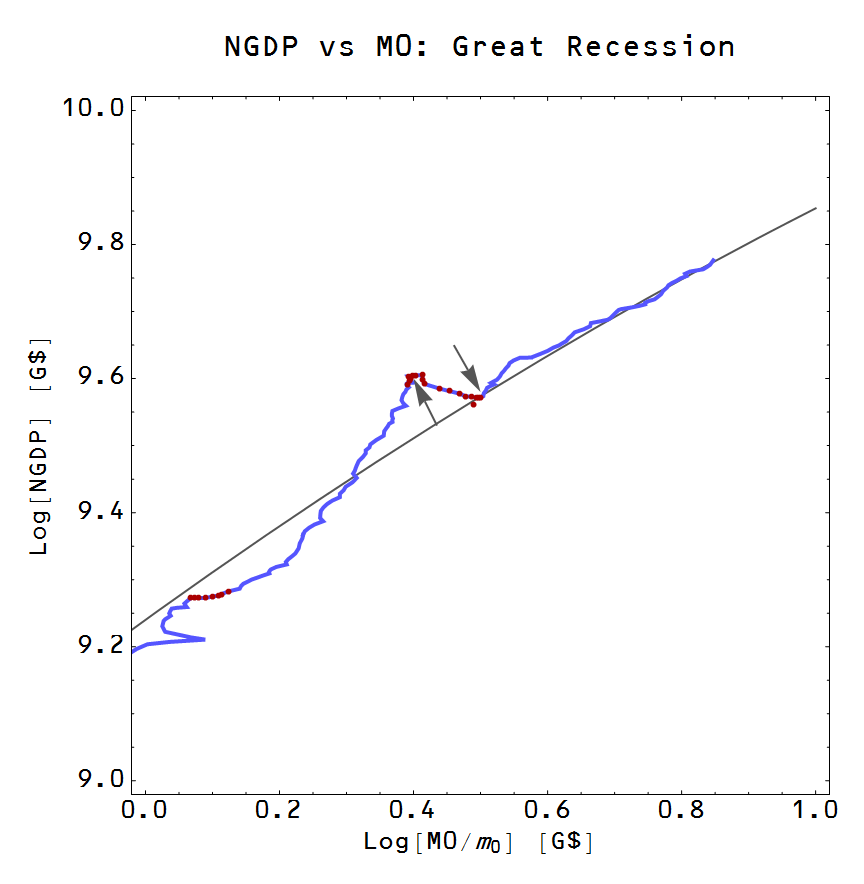 NGDP climbs well above the trend curve in gray and snaps back to the trend line (which it has been roughly following ever since). This picture also works for the recessions of the 1980s and 1990s (right graph below) and the "Great Moderation" (left graph below): 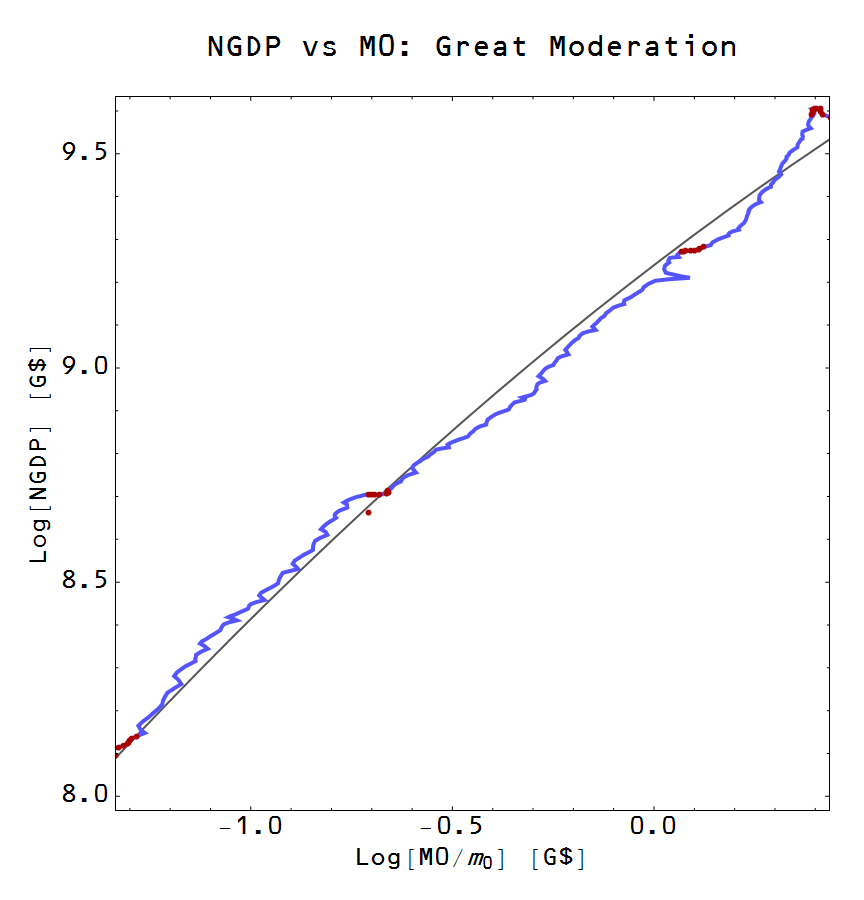 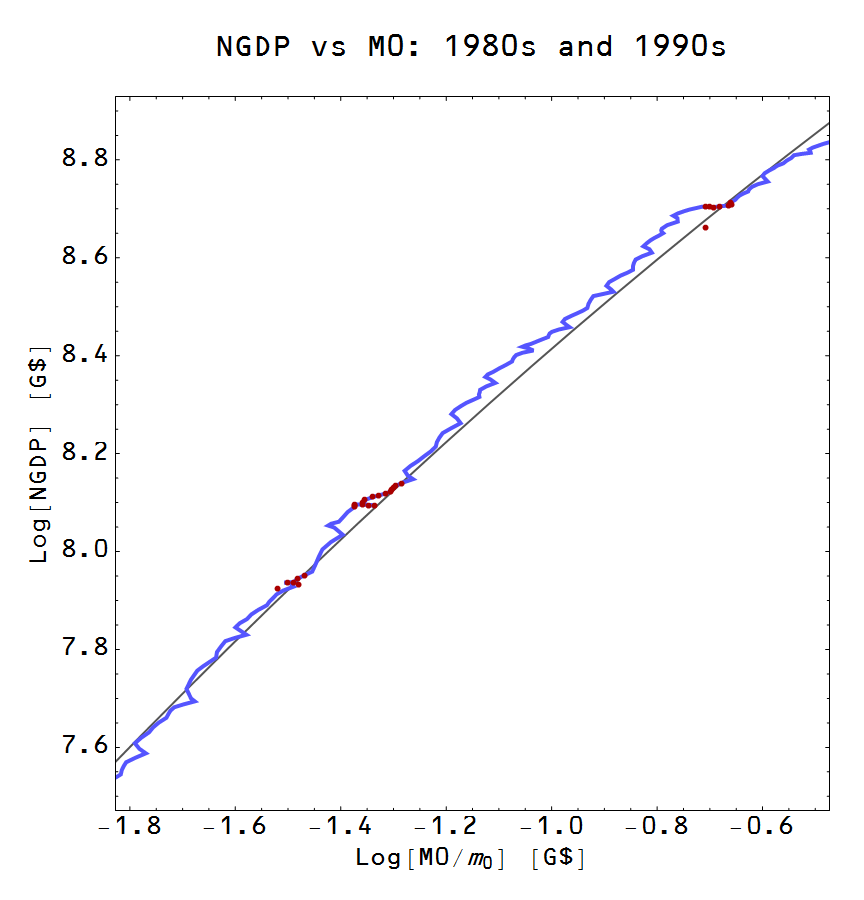 
How do we interpret this mechanism? Well, one way is with the monetary sand pile analogy I wrote up several months ago where recessions are like avalanches due to the sand pile being too high for the volume of sand. Another analogy would be earthquakes: stress builds up over time (being to the left and above the trend) and suddenly snaps back into a low stress state (being on trend).


Both of these analogies point to recessions being random events (they happen at some time we can't really calculate), but not totally unpredictable. If we see that we are away from the trend for a long period, we can say that a recession may be on its way soon. If we are at or below trend, then a recession is less likely. This could be the basis for a "stress" index.


Interestingly, Robert Shiller has recently pointed to CAPE being above 25 as a sign of a future fall in the stock market. There was some additional discussion of this by Brad DeLong and Scott Sumner (both seeming skeptical). As far as the picture presented here goes, while there may be a bubble in the stock market, there currently doesn't seem to be much danger of a recession in the US. That could mean there is no bubble in the market or that a popped bubble won't impact the economy at large.


However, this model would prune my olive branch to the human-centric economics community: even the large deviations from the ITM appear to be the result of a "natural" process that depends mostly on the amount of money carrying information and the size of the economy. I guess human behavior could trigger these avalanches or earthquakes.
Posted by Jason Smith at 5:08 PM