Employment doesn't depend on inflation

Robert Waldmann and Simon Wren-Lewis, in discussing Paul Romer's history of macro 1977-1982, bring up the Phillips curve. I've also written about it on occasion.

I thought I'd have a look at the Phillips using the DSGE form of the information equilibrium model. Turns out it results in something really cool ... Here are the relevant equations from the DSGE form link:


Here $n$ is nominal output, $m$ is base money (minus reserves), $\pi$ is the price level, and $\ell$ is the total employed. The symbol $\sigma$ represents 'nominal shocks'. They are the stochastic part of the model, and they're typically positive. They represent the difference between where $n$ is at time $t$ and where it should be based on the change in $m$ from time $t-1$ to time $t$ alone -- essentially equation (1). The rest of the symbols are constants, with $\kappa$ being the IT index (approximately constant over the short run).


regardless of the information transfer index $\kappa$. Those nominal shocks I've talked about since this post? They are basically changes in the number of employed. That's why they're typically positive and typically around a few percent.

Effectively, employment growth is the part of nominal output (NGDP) that is left over after accounting for inflation. Thus there shouldn't be any relationship between inflation and unemployment -- i.e. the Phillips curve isn't real. This even applies to a version of the model consistent with expectations, since we could easily write:


That is to say expected changes in unemployment are the expected shocks to the economy after accounting for inflation.


How does this look empirically? Pretty good ($\sigma$ in blue, $\ell$ in yellow): 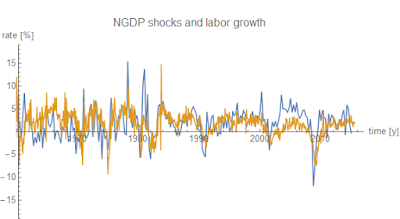