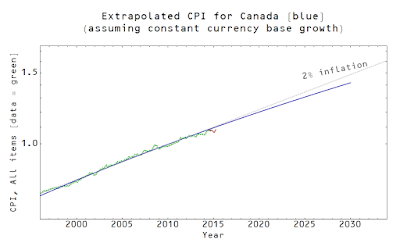 An anonymous commenter brought up my Canada model yesterday apropos of Canada "officially" going into a recession. Scott Sumner has some issues with the designation (calling it a pseudo-recession), something I've responded to here.

Coincidentally, I was preparing a post in response to Nick Rowe's question of why inflation targeting worked in 1996 in Canada but not 2008 (or 2015).

There is a simple reason in the information equilibrium model. The central bank can target any more inflation rate up to a rate π₀ (I put the model results this way once before). That rate π₀ steadily falls (unless there are large supply shocks like the oil shocks of 1973/4 and 1979 or hyperinflation intervening).

However, I have just shifted Nick's question to:

As I like to say there are more ways an economy can be organized when it is made up of lots of low growth states than a few high growth states. That is to say it is increasingly likely that a given dollar will be facilitating a transaction in a low growth industry.

Low growth goes hand in hand with low inflation and a large economy is more likely to be made up of many slowly growing prices than a few quickly growing ones.

All of these statements are basically saying a larger economy has higher entropy than a smaller one.
Posted by Jason Smith at 12:11 PM