I'm in the process of watching Mark Thoma's online lectures on the history of economic thought. I've only made it through the first two, but in the beginning of the second lecture Thoma brings up what for him is a puzzle.

He discusses the so-called "price revolution" where inflation spiked. It didn't really spike in our modern sense, being only a few percent inflation over more than a hundred years. However, given that nominal growth at the time was also only a few percent (or less), this is significant.

The inflation is typically explained by an influx of gold from outside Europe. Thoma asks: Why didn't that inflation drive up the cost of subsistence at the same rate it drove up output prices? I think I have a pretty good picture of why, but first let's start with some equilibrium analysis (this is in the draft paper).

If we have ideal information transfer (information equilibrium), we can say in the market P : N ⇄ M (price level as the detector of information flow between aggregate demand and money supply) the following two relations hold:


Let's say M grows at some rate μ so that M ~ exp(μt). Then, if ν is the nominal output (aggregate demand) growth rate and π is the inflation rate (growth rate of the price level), then


so ν ≈ π. That is to say nominal growth is roughly equal to inflation for k >> 1 (and real growth is small). That is basically Thoma's point above.

This neglects something very important, however. Or, more accurately, we assume something we shouldn't. Thoma naturally translates the modern concept of equilibrium back into the past, but there is no particular reason we should do so. And there is definitely no reason to use information equilibrium.

Here's a picture of what could be happening to the price level: 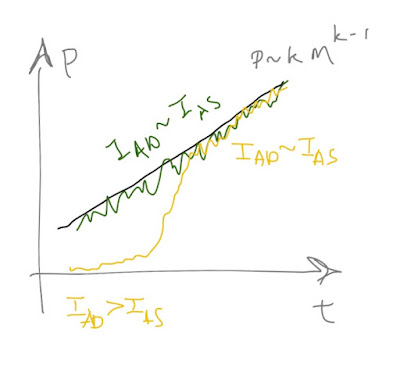 The equilibrium analysis is the black line and a real economy near equilibrium might behave like the green line. But what we're seeing in the 1400-1500s in Europe is an initial rise of macroeconomies -- the yellow line -- and the transition from non-ideal information transfer to ideal. The influx of money makes information transfer more ideal. The observed inflation rate π in the transition region does not come from an equilibrium analysis so it not only doesn't have to have any specific relationship with ν, the associated "real rate of growth" derived from the two measures is not a theoretically valid concept.

Subsistence goods likely had markets with more ideal information transfer than other output goods (because they were traded more regularly), so the inflation (actually, a movement toward ideal markets) would be concentrated among things besides e.g. food.

Thus the inflation associated with the rise of the first quasi-modern European nation-states with quasi-modern macroeconomies need not be associated with zero real growth. Actually, a pretty good analogy is emergence from a deep depression via monetary policy.
Posted by Jason Smith at 8:50 PM