Can we extrapolate growth into the distant past?

My conviction that the rate of growth in GDP per capita at the technological frontier had to be increasing over time sprang from a simple calculation. Suppose the modern rate of growth of real GDP per capita (that is the growth rate after taking out the effects of inflation) is equal to 2% per year and that income per capita in year 2000 is €40,000. If this rate had prevailed for the last 1000 years, then in the year 1000, income per capita measured in the purchasing power of dollars today would have been €0.0001, or 0.01 cents. This is way too small to sustain life. If the growth rate had been falling over time instead of remaining constant, then the implied measure of GDP per capita in the year 1000 would have been even lower.

Emphasis mine. That is one possible conclusion. The other is that an RGDP per capita of €0.0001 (let's call this the Romer point) implies that there wasn't a functioning monetary economy in the year 1000. This second view can be described in the information transfer framework where it also makes sense of the price revolution of the 1500s (or so). Here is the picture I have in mind: 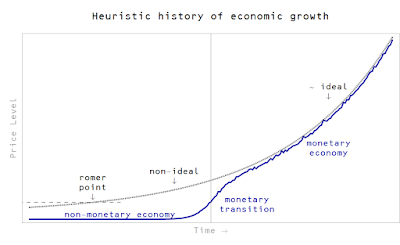 I use the price level P instead of RGDP per capita [2] not only because it is more relevant in the information equilibrium picture, but also better illustrates what is going on in my view. It's not that real output was zero, but rather the price of everything was effectively zero: there wasn't a functioning monetary economy. The market (information equilibrium relationship) P : N ⇄ M hadn't been established, I(N) > I(M) so that P < k Mᵏ⁻¹. Real output R = N/P would be undefined. The gray line indicates ideal information equilibrium while the blue line is the realized economy (non-ideal at first, ideal later). There was a transition to a monetary economy in Europe, historically identified by the price revolution [3], followed by economic growth.

This picture is similar to what happens in the p-V diagram in the liquid-gas transition (discussed before here). But that brings up what I'll admit is an unfair characterization of Romer's argument, but it is not incorrect.

Romer's argument that proceeding back in time assuming a growth rate of 2% per year implies income too small to sustain life in the year 1000 is analogous to saying:

Looking at the p-V diagram for an isothermal process, it appears you can eventually compress an ideal gas into a volume smaller than an atom therefore the number of degrees of freedom f in p = (2/f) U/V must be shrinking as a function of volume.

That is a plausible guess, but what really happens is that the gas condenses into a liquid and you go from ideal information equilibrium to non-ideal information transfer between the process variables U and V. Inter-molecular forces begin to matter. You undergo a phase transition. The correct conclusion to draw from the argument is that the gas should behave differently, but the argument is not evidence that you know in what way it behaves differently.

Romer should have drawn the conclusion that the economy in the year 1000 must have been different from a modern economy, not that the rate of growth must be increasing over time.

In terms of the price level picture (note: Romer is arguing about RGDP growth) the solution he proposes to the Romer point (real output isn't worth anything in the year 1000) above looks like this: 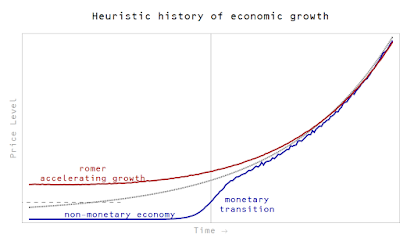 John Handley points out (correctly) that Romer is talking about real growth. I noted that above, but here's a less hand-waving version of the idea that real output measures output in terms of money, but not necessarily physical widgets:

[1] I changed the dollar signs to € to prevent problems with my mathjax script, but even there we see why this might be a bit strange. Why would you measure income in dollars in the year 1000? Who would take fiat currency in the year 1000 except possibly in China?

[2] As I mention here, the real rate of growth may not be a well-founded concept.

[3] I think this price revolution might refer to the gold standard and there might be a different one associated with fiat currency.