I put up a joke post about various schools of economics. However, in all honesty the whole idea of "schools of thought" is ridiculous. It happens in fields like politics (e.g.), literary criticism or philosophy because there is no measurable data that allows you to accept or reject ideas. Therefore ideas just proliferate -- and therefore only organizing principle is taxonomy. Basically, we have evolutionary trees with a school being like a genus. In science, the organizing principles are frameworks: evolution, quantum field theory, statistical mechanics. Since ideas cannot be rejected in philosophy, frameworks (things capture the information in previous rejected ideas) cannot be built.

Additionally, all schools of thought in literary criticism or philosophy are in a Bayesian sense effectively derp. Since you cannot reject them, their priors are effectively infinitely strong.

So why does it happen in economics? There's lots of things to measure and lots of data. Check out FRED: there are 383,000 easily downloadable time series.

So here's my theory of schools of economic thought: each school is a derp genus.


Since derp cannot be rejected, the only organizing principle is taxonomy. Therefore we get names like "post Keynesianism", "market monetarism" or "MMT" and pictures like this: 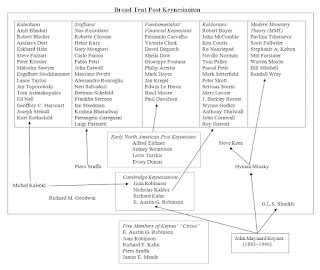 I think adopting this terminology ("school" = "derp genus") would really help discourse. Simply replacing the words "post Keynesian economics" and "market monetarist" with "an economic derp genus" would be not only a good marker (like the bright colors of poisonous species), but might actually help the members of various derp genera realize they are peddling derp. We could easily recognize whatever comes next has never been compared to empirical data -- and never will be because the priors are too strong.