There were a couple of posts that came up recently that discuss how "saving" doesn't mean what you think it means (in economics). Here's Nick Rowe with a good macro class version. Here's Steve Roth's critical take on the term. (N.b. I'm not critiquing either post in this post).

I find Nick Rowe's (i.e. the traditional) definition of saving to be a perfectly acceptable definition:

... "saving" means literally anything you do with your income except buying newly-produced consumption goods or paying taxes.

Which is encapsulated in the identity Y = C + T + S. This says there are two economically interesting things you do with your income (consumption and pay taxes = C + T) and everything else (S = "saving" = boring!). Let's try to illustrate what is going on in the macroeconomy using the information equilibrium picture (e.g. here). Say taxes are blue, consumption is red and saving is everything else (yellow). The growth states of a macroeconomy might look like this: 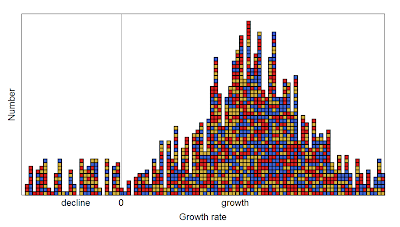 This says e.g. consumption on item X went up in location Y, while taxes collected from activity A went down in state S, etc. Integrating up these diagrams from each quarter (year, month, etc) gives you the level of the contribution to Y on that color coded segment.

Does it make sense to break up Y into C, T and S in this case? Not really. Each type is uniformly distributed throughout the states. But what if there's a central government and all changes in taxes collected are correlated? Well, in that case we have a diagram that looks like this: 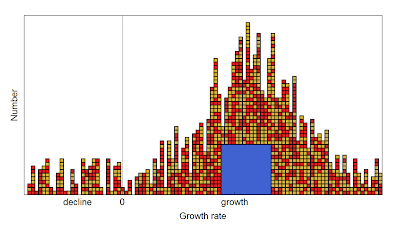 And in this case, it does make sense to break out T.

However, since S is "everything else" in the economics definition, it doesn't really make sense to break it out. It should be Y = C + T + R where R means residual. My diagram above makes a case that Y = X + T where T is taxes and X is everything else.

However, that also means that in most of those national income accounting identities, there will be a "residual". In Y = C + I + G + NX, it's I. In some post-financial crisis models, there's an argument to add a financial sector (gray): 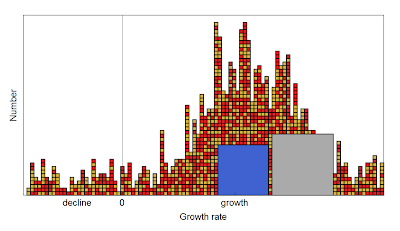 
where G is government spending, F is the financial sector's contribution to GDP (whatever that is), and X is everything else.

Note these break-outs don't have to move exactly as a single block, and you could have something that looks like this at some period of time (imagine a transition from the first graph above to this graph -- a jump in consumption growth and a fall in "saving" growth, with Y growth staying the same): 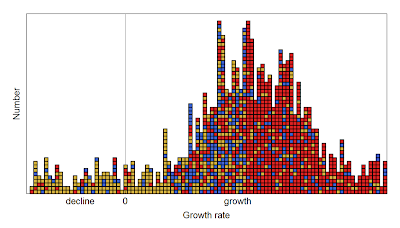 In this case, it's a bit fuzzy to nail down exactly what is happening to what (this is probably the most realistic version -- with the large box versions being an approximation to this diagram). But overall, there are a few things that appear to operate as correlated units.

So the bottom line is that an accounting identity of the form:


Is a statement that someone (at some time) found A and B (and ...) seem to move as correlated units in a way that is useful to explain some effect or policy. And then there is everything else (R).

In our old friend the national income accounting identity, we have


where R = I. This identity happened because in the Great Depression consumption of newly produced goods seemed to be correlated (and falling), and while it was theoretically possible to try and export your way out of that mess, not everyone could (and most of your trading partners had the same problem). So boosting government spending was a potential solution.

This only makes sense if the real empirical distribution looks like that last one with G in blue and say C + NX in yellow and I (the residual) in red.

But if that isn't what the empirical distribution looks like, then boosting government spending (moving blue boxes) might just displace some red and yellow boxes with no net result -- e.g. due to Ricardian equivalence, or monetary offset. That is to say: declaring Y = C + I + G + NX does not mean the distribution usefully breaks up into C, I G and NX.

In case you were wondering if this is how a real economy looks, here's some data. I used the components of CPI instead of nominal output, but that should be a good proxy. They should be weighted by the relative size of each component, but this just counts up the number of CPI components with a given growth rate (and normalizes it).

As you can see, this shows a peaked distribution around the CPI growth rate (inflation rate), much like the graphs above (although those are nominal growth rate).

Steve Roth stops by in comments below to dispute my interpretation of the national income accounting identities. Let's consider two possible definitions of what we could mean by the "accounting identity" Y ≡ A + B. First a picture, and then some words: 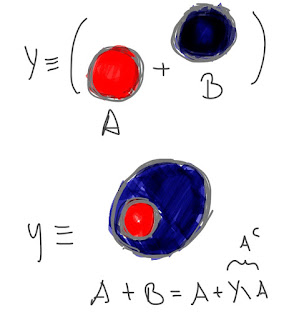 In the second definition, B is the residual (what is left over after defining A), and there may be things in B (subsets of B) that are not (loosely speaking) well-defined except in terms of Y and A.

Now let's say (in the following, by consumption, I mean private consumption, and everything is relative to the "current year" and for "final use"):

It seems obvious to me that we are looking at the second definition when it comes to the national income accounting identities Y ≡ C + I and Y ≡ C + S (ignoring government and exports, but including them just creates three well-defined A's above, with I and S still remaining residuals).

It is critical to note that neither definition has any implications for the relative dynamics of Y, A, or B. It's a definition, not a model (or as Steve puts it, counterfactual). More on this here.

We can adapt the old example of shoes and socks used to discuss the axiom of choice in math to help intuition here.

However if Y is instead the set of things you wear on your feet, then the Y-complement of right footware includes not only left shoes but socks such as tube socks that are neither left nor right. That is to say the second picture is the one we should have in our head, not the first.

When we look at Y = C + I (ignoring government and exports for simplicity), we have a situation where Y is defined and C is defined (Y that is consumed) leaving I to be the residual (Y that is not consumed, which could be anything and which economists confusingly dub "investment" since most normal people consider buying stocks or bonds "investing" rather than e.g. toilet paper bought for company bathrooms).

Steve additionally says that I isn't a residual, but S is (in Y = C + S), which is problematic for maintaining total income equal to total expenditure.

In our shoes and socks example, we have footware sold and footware bought. These should be the same.

We'd fail to maintain the income/expenditure identity. That is to say

where X is unknown. To be explicit with the footware example, we have:

But previously we said as a matter of definition Y ≡ C + I. So X must be zero (i.e. the empty set).

Essentially, Steve must be changing the definitions of savings and investment to be different from economists' definitions. That's fine, but he can't the call me out for being wrong for not going along with his definitions. In those cases we usually say something like "I don't like those definitions" ‒ and I agree! That was the point of the my post above. I think my post gives a far more well defined way to proceed. We can even address some of those dynamics questions by linking the definitions of our partitions of Y to partitions that have sensible dynamics. Keynesians like to think that Y = C + I + G means that boosting G boosts Y, and if G is a correlated unit (as representing in the post above by the big blue box), then that is probably true. And if I is a residual, then there's really no telling what happens to I when G changes (∂I/∂G is not just model dependent, but not even well-defined).

The key issue is that when you define something by what it is not, you have to be careful about what you've put in your set.
Posted by Jason Smith at 5:30 PM