I have been dealing with time series for quite awhile now, but I thought I'd formalize a couple of properties. First, let's rewrite the information equilibrium condition. If $A = A(t)$ and $B = B(t)$, then


This simplifies for two relevant classes of functions: waves and exponential growth.

Here is a graph of an example: 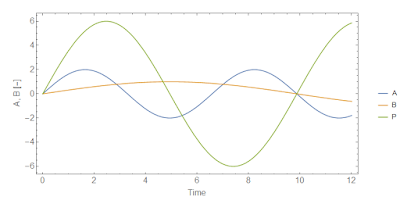 Here's another with changing frequencies: 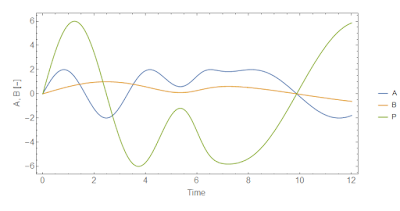 
Basically, the growth rates are proportional to each other. The abstract price $P \equiv dA/dB = k A/B$ is

Here is a graph of an example: 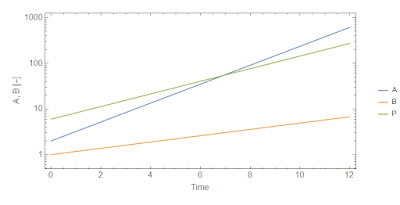 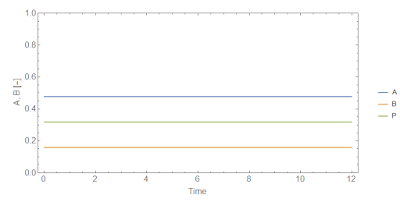 And it's even better to see this with real data (the quantity theory of labor model): 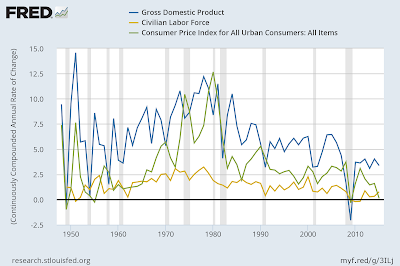 PS The growth rate graphs should say growth rate on the y-axis, but I'm too lazy to change them right now.

I figured I'd eventually get the question: what happens if you combine waves and growth. However in thinking about it, I came the the realization that the waves picture might not be useful for economics (it could be useful for communication theory). That's because if you have a damped oscillator, you'd actually have to have the economy completely collapsing and going negative. This doesn't really make a lot of sense.

What you really have in macroeconomics is fluctuations in growth rates, not some growth rate plus a oscillating component.

I did put together a picture to illustrate this, and found something interesting. Here is the growth rate $\gamma_{B}$ -- it falls but does not go to zero and there are some oscillations: 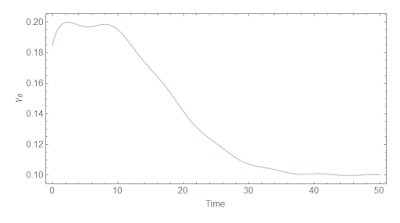 And here are the (continuously compounded) growth rates of the three components ($A, B, P$): 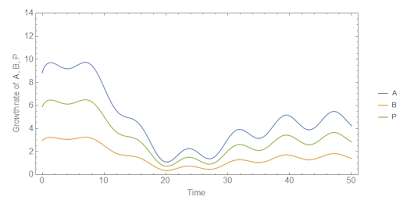 I was interested in the shape of the second set of curves -- they appear to fall and then rise again. The source growth rate $\gamma_{B}$, however, just sort of smoothly falls towards its steady state. Since this was supposed to be a cartoon/toy model of the US economy (see above), it made me thinking that it was possible our current low growth and inflation rates might rebound like this -- that current low growth was just such a point.

Maybe that is why Japan has hints of a rebound?

I could have also made some kind of calculation error. Consider this highly speculative.
Posted by Jason Smith at 5:31 PM