Waiting for a philosophy of economics

Noah Smith: One of the issues with economics is that there are ten million theories with no way to choose between them.

Jason Smith: I'd agree -- I think economics needs a framework to reject theories.

John Handley: So you're a Popperian?

Jason Smith: Not really. That falsification stuff is good in principle, but Popper believed general relativity falsified Newtonian gravity which is not a word I would use.

John Handley: But general relativity is the current fundamental theory of gravity, so Newton is false, right?

Jason Smith: Newtonian gravity is an effective theory of gravity for small field strengths. It gets most spacecraft where they're going. One of the few practical applications of general relativity is a small correction to GPS results due to satellites being a bit farther out in the gravitational field, changing the speed of their clocks relative to one on the ground.

John Handley: So it's not false?

Jason Smith: You could say it's false on galactic scales and near black holes. But really, a physicist would just say that's outside the theory's domain of validty. Relativity represented a paradigm shift in how we looked at Newton.

John Handley: Paradigm shifts and theory rejection ... you're a postpositivist. Empirical evidence in favor of a hypothesis is irrelevant and falsification is all that matters.

Jason Smith: Maybe for the current state of economics, but that's not an absolute. In physics, what's needed are more experiments and more theories. Theory rejection isn't a problem in physics since there aren't ten million theories -- there's only one.

John Handley: So postpositivism is just your philosophy of economics ...

Jason Smith: I offer a lot of empirical evidence in favor of the information transfer models on my blog. Theory rejection is important, but so is theory validation. Economics seems to have a problem with rejection, not with validation -- all kinds of models are consistent with the data.

John Handley: You don't seem to have a proper philosophy of science.

Jason Smith: It seems like a lot of the philosophy of science is done by people who aren't scientists. Why do they take it up?

Jason Smith: That explains a lot.

John Handley: Then what is your philosophy of economics?

Jason Smith: I'd say it's more of a pragmatic empiricism.

John Handley: I don't think that word means what you think it means.

John Handley: Empiricism is most closely associated with Hume and, while it serves as the backdrop for newer philosophy of science, is neither new nor worthy of attention when considering a new philosophy of economics. Empiricism is an epistemology that elevates experience over a priori deductions.

Jason Smith: No! That is exactly what I mean!

John Handley: You can't be serious.

Jason Smith: I'd update personal experience a bit for the information age, but you shouldn't believe anything in economics unless you've run the regressions yourself. In the age of FRED, all of the data is a few clicks away.

Jason Smith: Yes, but that's where economics is! It's hard to see with all the sophisticated math developed for physics and the modern data aesthetics, but deep down economics is a field without a Newton.

Noah Smith: There are lots of empirical successes in economics.

S: Tomatoed. Are you done blogging?

S: When you're done, can I play Goat Simulator?

I forgot to add this somehow relevant picture (in my mind) from the Galileo museum ... Geocentrism had cooler models ... 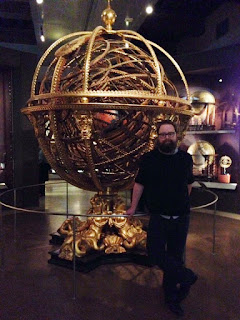