I updated the model here with the actual deflator for the real capital time series (H/T to commenter Marko).


However, ever since I put that model together I asked myself: does it have to be capital? What else could Z be in the model:


Here's the graph of nominal capital alongside nominal wages (times a normalization factor): 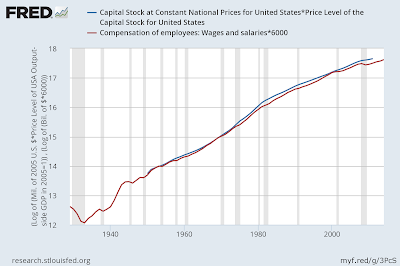 They have about the same shape -- maybe that would work just as well for Z? Or maybe some measure of money? It turns out those choices don't work. The problem is that they have too much of the business cycle in them making nominal growth fluctuate too much and inflation jump around.

It also looks like NGDP, but Z = NGDP is problematic for obvious reasons. It's also not smooth enough.

So what else could it be? Here's the FRED series (real capital multiplied by price level of capital). Is there anything that is comparable?
Posted by Jason Smith at 3:00 PM