Diane Coyle has taken her crusade against GDP (as a measure) to the NYTimes OpEd page. I don't have much issue with it in general, however she claims:

Growth forecasts for gross domestic product in the United States at the end of this year vary from about 1.75 percent to 3 percent — a good measure of the lack of consensus.

Does this reflect a lack of consensus? I did some simple linear extrapolations in the IT model and looked at the error in the estimate of 2015 Q4 RGDP (i.e. propagating error in the prediction of PCE inflation and NGDP to RGDP) to get a handle on how big a 125 basis point variation stacks up. Here are the extrapolations: 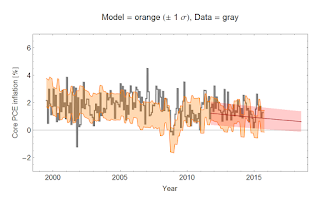 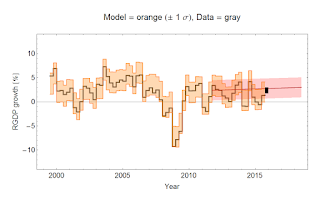 Even casual observation of the raw data tells us the 125 basis point spread (black rectangle on the second plot) is remarkably tight. My 420 point band would be more indicative of a lack of consensus!

The truth is that precision to less than a percentage point may not even be possible. It seems Diane Coyle is setting up economic forecasts to fail.