Partitions of an economy

I am working towards quantifying something I've said several times (e.g. here or here or here) -- that the trend towards lower growth as economies grow is a result of there being more ways an economy can be composed of many low growth industries than a few high growth industries, the former being a higher entropy state. This was an analogy with thermodynamics: there are more ways to emit several low energy photons than a few high energy ones, hence hot things are red, not blue (unless you get really hot ... )

Essentially, I am trying to derive the "economic temperature" ~ log M in a more rigorous way. See the section of the paper on "statistical economics" for a starting point.

Let's say nominal ouptut (NGDP) is given by


with growth rate ρ. Let's say that output consists of several industries (or firms), each with their own growth rate rᵢ so that


If the growth rates are small and we keep ourselves focused on the short run, then we can say ρ t << 1 and rᵢ t << 1 so that 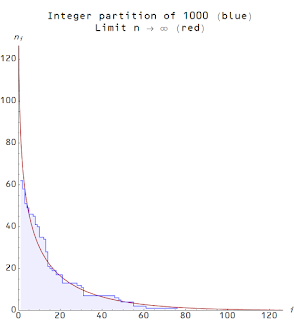 These partitions have a smooth distribution for N0 >> 1 (the red line, the Vershik-Kerov-Logan-Shepp limit shape). Note, I mentioned Ferrers diagrams at the very beginning of this blog. Here are several partitions together: 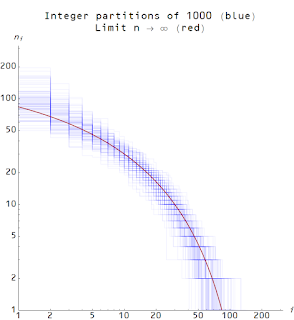 The red curve represents the most likely paritition of an economy of nominal output N0 into various industries -- so we have the distribution of Aᵢ. The overall growth rate is then proportional to the dot product Σ Aᵢ rᵢ ... note that Aᵢ rᵢ is itself another partition, this time of N0 ρ.


The last statements aren't really true because of the possibility for negative growth rates rᵢ. The terms Aᵢ rᵢ are not a partition of N0 ρ.
Posted by Jason Smith at 6:42 PM