The 2% inflation rate since 1990 would be an amazing coincidence, almost a miracle.

This is another place where reasoning using scales and dimensional analysis would really help. A 2% inflation rate sets a time scale (it is per year) so t = 1/π. For it to be a miracle (i.e. a fine tuning problem) that the Fed's (implicit) target and the inflation rate to match up there would have to be no other scales T ≈ t. So we should ask: Are there any other time scales T in a nation such that T ≈ t  from 1990 on besides the central bank target?

How about say ... labor force growth? 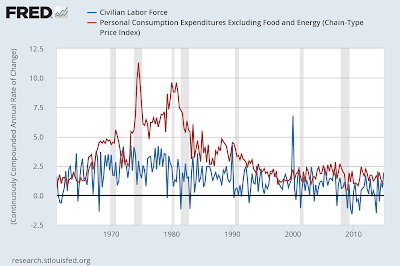 Actually employment growth (T = 1/λ) matches up pretty well too, including the times before 1990. Nearly all of the major differences are recessions: 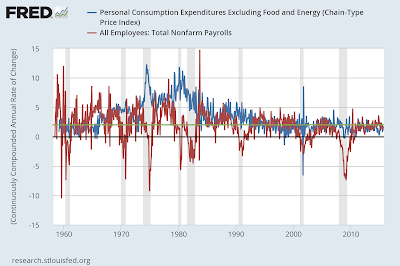 The information equilibrium model gives a mechanism for t = 1/π ≈ 1/λ = T for this latter example through nominal shocks.

Something that would be a major coincidence (i.e. finely tuned) if it wasn't the result of some underlying theory is the Grand Unified Theory (GUT) scale:

Another place where the value of a parameter considered something of a miracle is the strong CP problem. It's somewhat of a miracle that the CP-violating term of the QCD Lagrangian is about a trillion times too small. It's such a fine-tuning problem that the axion was proposed to fix it.

But there exists at least one scale T that is approximately equal to t (i.e. π ≈ λ), so it's not necessarily a miracle that inflation is on the order of 2%.

Actually, it's more of a miracle that central banks chose to (implicitly) target 2% inflation. A larger target might have shown persistent undershooting earlier. However, the Fed never announced an explicit inflation targeting policy, and only has said 2% is consistent with its mandate more recently. Overall, the onset (1990s) and explicit target (about 2%) have a lot of wiggle room. And saying the Fed has targeted 2% PCE inflation does not explain the unbroken trend towards lower inflation since the 1980s (something that comes out of the IT model: see here or here).

PS I don't really want to link to the Insane Clown Posse, but their music video Miracles, which Brad DeLong frequently posts a screenshot from is immediately what I thought of when Scott called 2% inflation in the absence of effective central bank targeting a 'miracle'. In it, the ICP asks "#$%@ magnets; how do they work? And I don't want to talk to a scientist ..." Anyway, that's the rationale for the title.
Posted by Jason Smith at 10:09 PM