So now Noah Smith is unlearning economics; he put together a list of Econ 101 fails (quoted below with commentary from the information transfer framework). First one first:

1. If you slap some quick supply-and-demand graphs on the board, it looks like minimum wages should harm employment in the short term. But the data shows that they probably don't.

Supply and demand graphs are incorrectly used in this situation by economists (as I talk about in this post on Seattle's new 15 dollar/hour minimum wage). What is comes down to is that when they set a price floor in the Econ 101 supply and demand diagram, the "solution" determined by the demand curve and the price floor and the "solution" determined by the supply curve and the price floor are no longer a solutions of the same general equilibrium equation. If this is treated correctly, then if you set a price floor X in a single market then prices generally shift to p + X and the general equilibrium is higher (supply and demand both increase).

There is also the potential that the labor market might not be ideal (the true information equilibrium price may be higher than the realized price), so a price floor actually makes the market more ideal.

Also, with Malaney and Weinstein's gauge invariant approach (linked to here with some discussion), a constant shift shouldn't do anything (except instantaneously at the time of the shift) on its own. The constant shift can only matter relative to every other market. That means it becomes model dependent: Can you shift from minimum wage labor to machines in your specific business/industry? Or will you just have to eat higher labor costs or pass them on through as higher prices? These questions cannot be solved with Econ 101 supply and demand diagrams.

And that is the key in understanding the difference. If the price rises for labor in a market, in Econ 101, it would be interpreted as a positive demand shock or a negative supply shock -- if you didn't know about the minimum wage. That implies firms should view the situation (if they just look at the price) as if there was a shortage of workers. But there aren't fewer workers in the labor pool ... in fact, there are probably more because they'd be incentivized to enter the labor pool based on people making more money (assuming they also didn't know about the minimum wage increase).

From a rational behavior perspective, this would actually massively increase employment. Firms would think labor is a scarce commodity, but there would be lots of it. The Econ 101 picture says that firms don't interpret this price increase as scarcity, but instead just hire fewer workers.

That is to say there is a radical difference in behavior based on whether you know that the going wage was because of a minimum wage law as opposed to a supply or demand shock. Which means that somehow the price is somehow carrying information outside of a simple number. This is inconsistent with Econ 101 -- the price aggregates the effects of supply and demand shocks and doesn't categorize them as to whether they are due to regulation or part of the natural functioning of the market.

So traditional Econ 101 analysis cannot be used for minimum wages (or taxes, tariffs, subsidies, etc). It's necessarily more complicated. Info Econ 101 reasoning with supply and demand diagrams would say that it shouldn't do anything. But you should really look at it as a much more complicated problem not amenable to naive analysis.

I hope that is clear, because it's important.

2. If there's any sort of limits to mobility, then simple labor demand theory says that a big influx of immigrants should depress the wages of native-born workers of comparable skill. But the data shows that in many cases, especially in the U.S., the effect is very small.

I am not sure why any economist would think of this as a short run pure supply shock in partial equilibrium.

In the information equilibrium model, a positive labor supply shock would lower the price level (i.e. lower nominal wages, but not real wages) if it was unaccompanied by nominal output increase. If NGDP was constant (a requirement for the partial equilibrium analysis), that actually means since the price level goes down RGDP increases since NGDP/P = RGDP.

However, how do you add people to the labor market without increasing output unless all of them remain unemployed? Their wages are NGDP. Their output is NGDP. It is impossible to add labor without taking into account the at least possibility of adding output, so the labor market should never be considered partial equilibrium. Therefore you can't use supply and demand diagrams. You should use general equilibrium -- something more like the Solow production function -- which says extra labor means extra output.

Of course at this point you say: but the question is about the effect on native born workers.

Ah, but since output is in information equilibrium with total nominal wages (NGDP ⇄ NW) with a constant price (at least for Info Econ 101 analysis), if output goes up then total nominal wages must go up as well. If NW goes up by X ... NW → NW + X, if the wages of one group goes down, then we must have X = Y - Z (immigrants add Y > X to NW and take Z away from the existing labor force). This becomes two competing general equilibrium effects. That may be what happens, but it's not a simple Econ 101 supply shock. The Info Econ 101 tells you something more complex must be happening (if it is happening at all).

3. A simple theory of labor-leisure choice predicts that welfare should make recipients work less. But a raft of new studies shows that in countries around the world, welfare programs barely reduce observable work effort.

Level of work (like hours per week) is a social norm (below), so is hard to budge. In fact, it is one of the most constant things in economics. There is no way you can understand a few percent effect like this until you understand larger effects like the price level.

So you should assume you don't know how people make decisions at the micro level. Don't worry -- this doesn't mean you have to get rid of utility maximizing agents; instead they are emergent and therefore the behavioral implications don't apply at the micro level.

Noah follows up at Bloomberg View. He suggests a focus on empirics to protect against naive application of theory. I think "scope conditions" would be better. On a related note Cameron Murray has a good post up comparing economics to religion where I commented:

Teaching the idealized theory along with its limits seems a better idea than teaching complex empirical analysis to me.

I just wanted to add this graph that simply illustrates the issue with the Econ 101 supply and demand diagram explanation of the effect of a minimum wage and the Info Econ 101 explanation: 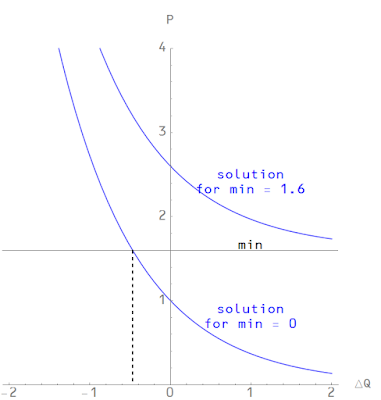 In this diagram the equilibrium price is 1 at ΔQ = 0. In the Econ 101 explanation, if you set a minimum wage of 1.6 (horizontal line), then demand falls to the point indicated by the dashed line. However, the blue demand curve isn't the solution to the differential equation with a minimum price of 1.6, but rather the solution for a minimum price of zero. You can't change the boundary condition and assume the demand curve will be the same.
Posted by Jason Smith at 4:10 PM