The impotence of great men

This just seemed kind of odd to me:

This is my personal favorite from the Fed's long history of caving to political pressure. https://t.co/d6fBI4jvax pic.twitter.com/Xbmg1Nxqtw
— Binyamin Appelbaum (@BCAppelbaum) November 12, 2015


That must have been some shove for it to have had an effect for the next 15 years, 10 of which Martin wasn't even in office. So interest rates after 1965 should have been low, right? Actually, they went up (see the paper for the IT model; this form uses the same parameters for short and long term rates): 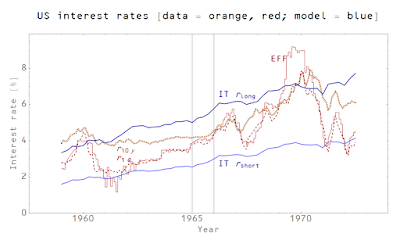 Overall, rates for the next few years were basically where the IT model said they should be. In fact, they were where they would have been predicted to be by the IT model from data up to 1963 extrapolated out all the way until the late 1970s (the oil shocks weren't predicted by the IT model). So neither Johnson nor Martin really did anything. 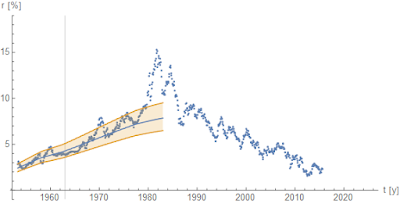 The 60s and 70s was a time when 'loose money' tended to send interest rates higher (due to the income inflation effect, as described by Milton Friedman), not lower. This is the general monetarist view that the IT model agrees with (at least until the 1980s). The impact of monetary expansion is positive in the 60s and 70s: 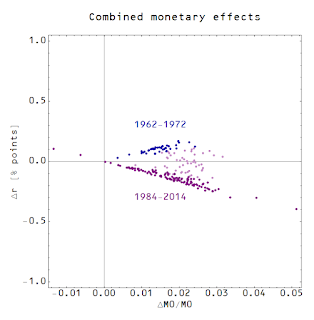 The IS curve had yet to become downward sloping (see here for a neat picture).

So in a sense, Martin and Johnson had no idea what they were doing. And we should be glad they didn't! They could have tried to keep interest rates low by stifling the growth prospects of the US -- reducing the money supply or not expanding as fast. They could have targeted 2% inflation like a laser. The required counterfactuals are draconian. We would have had the GDP per capita of Jordan today. 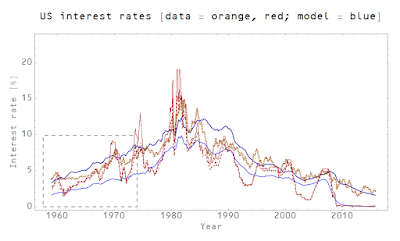