The minimum wage in Info Econ 101 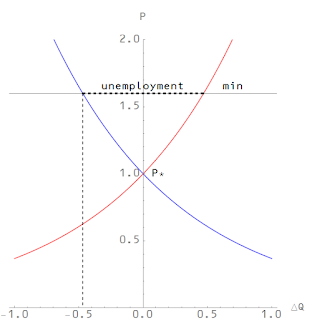 What do the curves below the minimum mean? These represent the "illegal" supply and demand for labor -- the desire to employ people at less than the legal minimum wage. I personally would like to drive well over the speed limit, but that piece of the solution space doesn't necessarily enter into my speed decisions that are more based on traffic and road conditions. I'd really like to go a speed that is impossible for my car to attain ... but that should have even less impact. 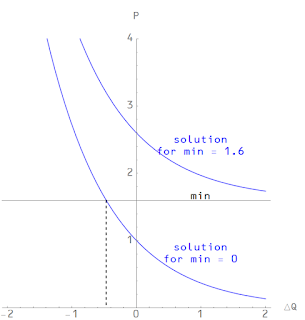 The original solution to the information equilibrium condition is no longer a solution in the case of a minimum wage. The intersection point with the minimum wage and the original demand curve (or supply curve) is no longer a meaningful point. The general information equilibrium solution just says both supply and demand go up ... at least in the simplified presentation. There could be all kinds of more complex factors going on.