Tom Brown asked if currency denominations had any impact on the price level in a comment here., and sent me to JP Koning's blog post about the macroeconomic impact of 500 € notes. What caught my eye was the shape of the 500 € note's contribution to M0. See, for awhile now (e.g. here), the shape of M0 has been a serious impediment to a good fit of the information transfer model to the EU price level. I always thought it had to do with the introduction of the Euro. The currencies of countries such as Italy's Lira continued to circulate for some time after the Euro notes were available -- I remember some prices were still in Lira when I was there in 2002 -- and I thought that the Euro M0 wasn't capturing that.


Here is the fit to the price level and inflation rate using M0 (including 500 € notes):

Not only is inflation too high at the introduction of the Euro, but it is way too low as you approach the present day. Here is a graph of M0 with and without the 500 € notes -- already you can see some of the variation disappear: 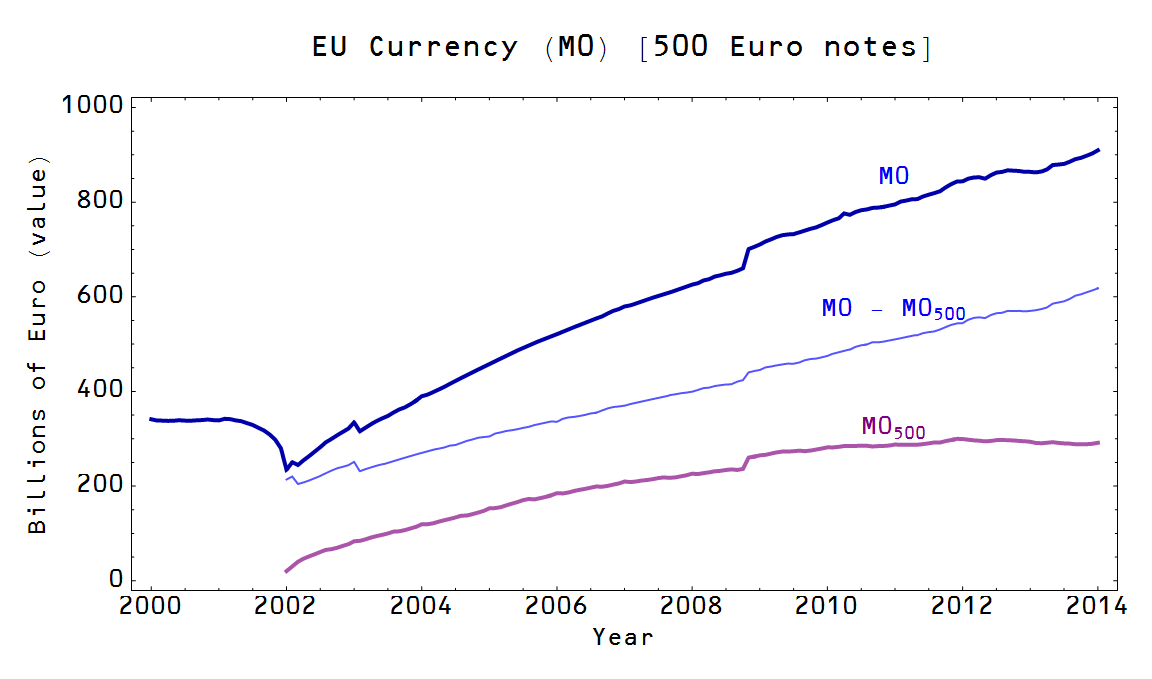 And sure enough, the fit is much improved if we leave them out:

There is still some impact at the introduction of the Euro, but overall, this is a much better fit -- in particular it gets present-day inflation about right.


Koning points out that the 500 € notes don't really circulate the way other denominations do (he cites that 9 of 10 notes are used for illegal purposes). Koning also points out that the existence of 500 € notes may impact effective short term interest rates (a negative IOR makes holding these zero-interest Euro notes a more attactive option) -- I plan on looking at the effect on interest rates in the future.


So how do we know whether or not to include a particular denomination? Well, only in the case of the 500 € note does it seem particularly obvious (empirically): it is particularly large with a particularly large volume. In other cases, it's probably not going to be very obvious. The question of what is considered "money" is of great interest -- maybe there are more examples out there.


If anyone would like to help me conduct an experiment -- please send me a few of these notes and I will keep them out of EU circulation and look at the impact on the price level. I will then travel to the EU (e.g. Paris) and personally put them back in circulation a few months later.