Karthik questions whether my human desire to see patterns and impose order on the universe has gone too far in this post where I speculate that recessions happen when the path of NGDP vs M0 goes above the trend (I also speculate that the timing of the recession is akin to an avalanche -- you can say when the probability is high, but not exactly when the avalanche will occur). That is always a good instinct as people tend to see patterns in randomness and we should be wary of testing hypotheses suggested by the data.


I promised to graph the data in a different way to better show the result (it is somewhat hard to see in the graphs except for the dramatic case of the Great Recession -- or Great Depression e.g. here). Here is the graph of the difference between the empirical path of NGDP-M0 and the theoretical trend: 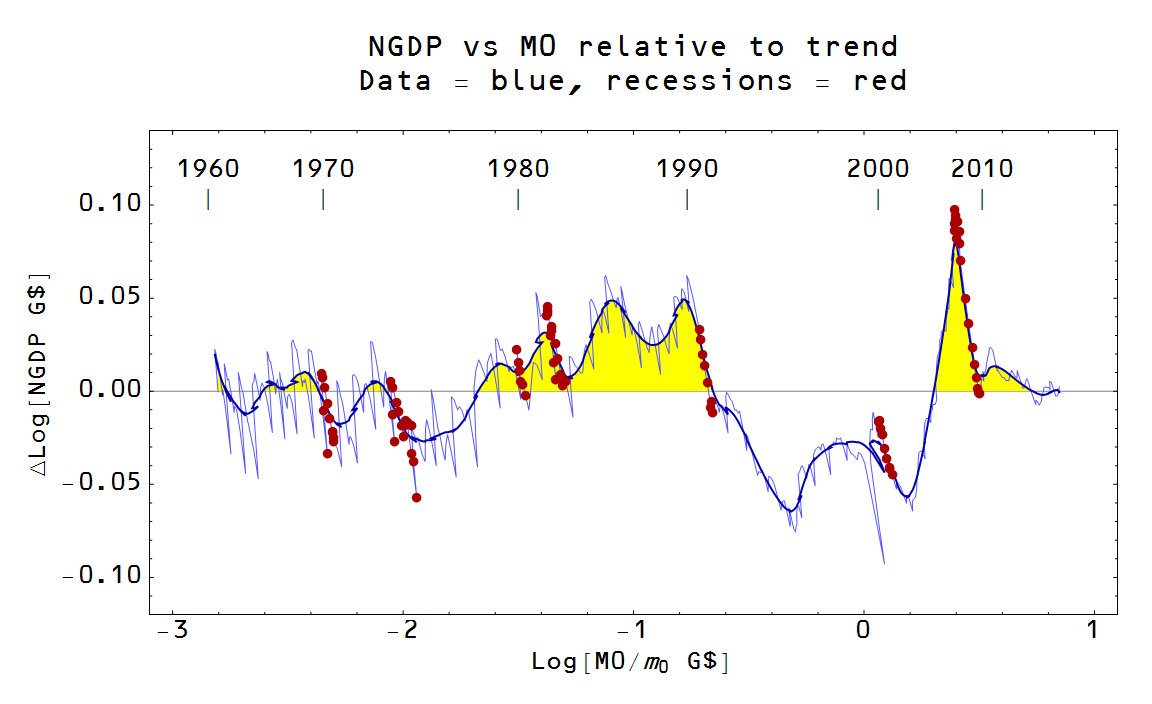 I also smoothed the data and highlighted where the data goes above the zero point. Two issues -- there looks like there should be a recession in the mid-to-late 1980s and the early 2000s recession happens when the data fall below the zero point. The former happened when the Fed was raising interest rates to subdue inflation -- interestingly this action seems to have pushed NGDP back up, much like how Fed raising interest rates pushed up NGDP 2006-2008. The other interesting coincidence is that a massive stock market crash (1987) and a banking crisis (1988) also happened. The difference between 1988 and 2008 was probably the fact that monetary policy was effective during the 80s and 90s (far from a liquidity/information trap).


There is some debate as to whether the early 2000s recession is a recession at all (unemployment peaked at 6.3%, only 0.2% above where it is today and NBER's recession probability maxes out at just above 50%) -- but not only is the recession not well described by the model, but also the fact that the path of NGDP-M0 was so far below the trend "equilibrium" path for so long. Did the economy find a different "equilibrium"? Is this one of the other states in a hidden semi-Markov model Noah Smith talks about sometimes? The other time the economy was significantly below the trend was in the 1970s. Interestingly that coincides with the two lowest "metastable" periods in the unemployment rate I talked about e.g. here .. . and that may shed some light on the above trend piece in the 1980s, which is when the highest "metastable" unemployment periods happen.

Ok, that is too much speculation for now.
Posted by Jason Smith at 6:53 PM