The emerging story of the Great Recession?

This is a synthesis of a few posts that seem to be converging on a coherent story of the Great Recession.

The Fed both reduced the monetary base (M0 and MB) and raised interest rates (also dependent on MB and M0) starting after 2005 relative to a log linear path of monetary policy from the early 2000s. These effects combine to account for the entire shock that caused the Great Recession, but come from two different views of monetary policy: an interest rate/ISLM view and a quantity theory view.

This post posits the idea that a deviation from a long term path of NGDP vs M0 is an indicator of a recession. What pushes the economy away from the path is an open question.

This post tries to see the relationship between MB (which governs short term interest rates) and M0 (which governs inflation). It shows that QE might have been larger than necessary and that base reserves only seemed to impact currency (M0) -- and therefore inflation -- during QE1.

The first task is to add the monetary base (including reserves) to the graph in the second post above (as was first done here)  giving us the left-hand picture below and zoom in on the 1980s and 1990 recessions, giving us the right-hand picture: 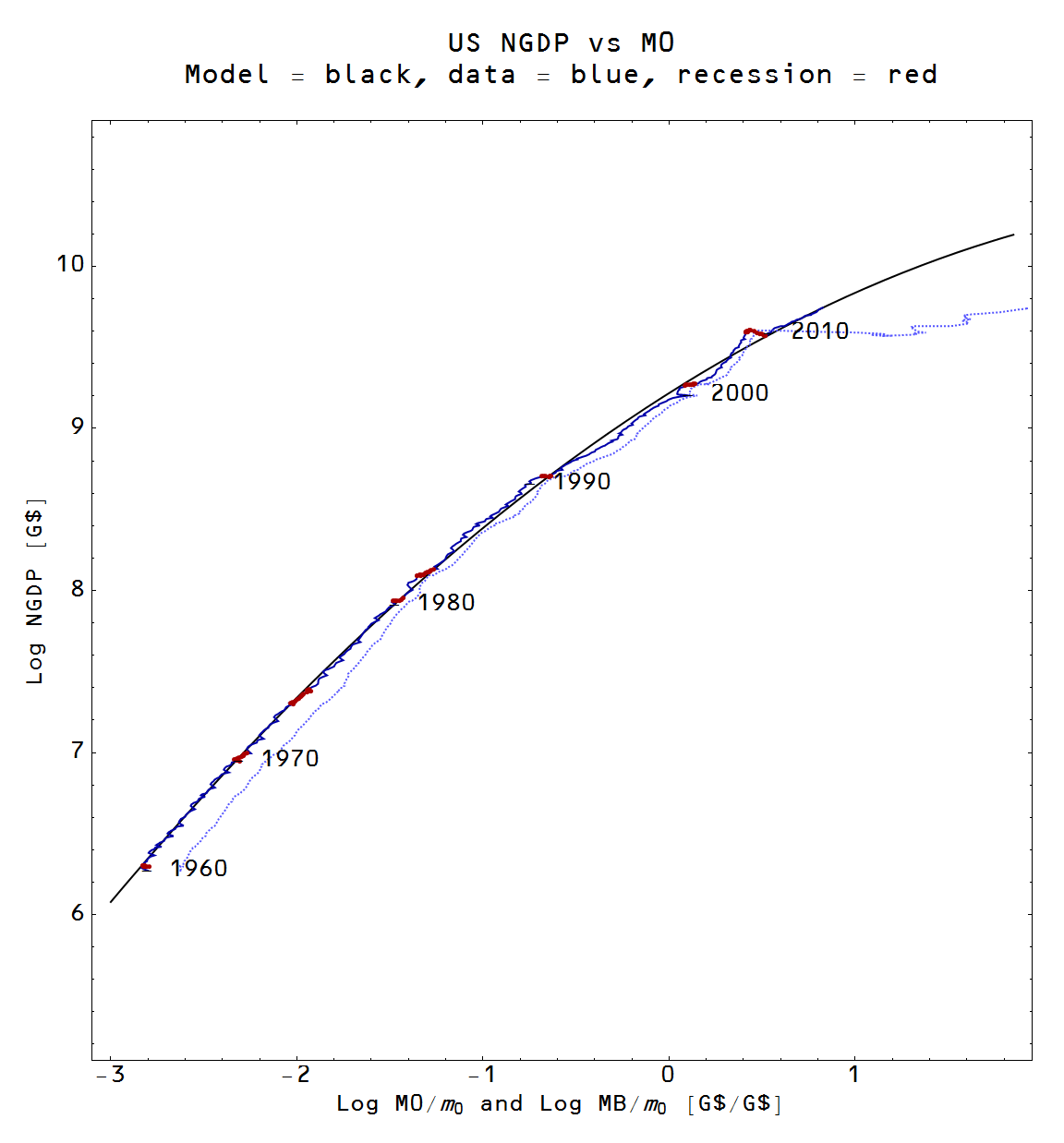 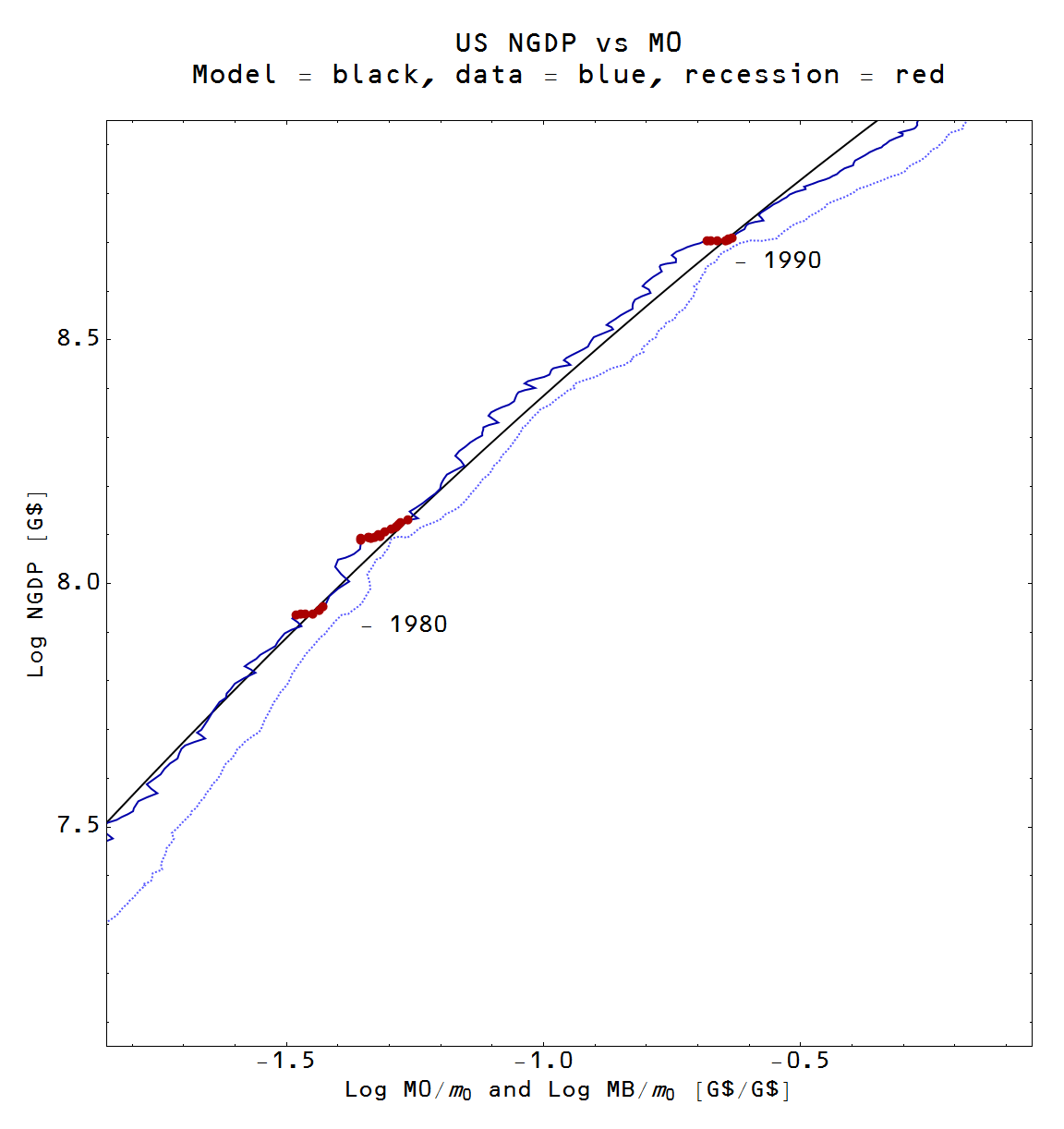 In the right-hand graph we can see the NGDP-MB line (dotted blue line) push up closer to the NGDP-M0 trend line (black) during the 1983 and 1990 recession (but there's no recession in the mid-1980s). The NGDP-M0 data line (solid blue) is "repelled' by the NGDP-MB line; the primary reason is reserve requirements (MB - M0 are the central bank reserves).

If these two lines move near or cross each other, according to the interest rate model, the yield curve would invert (short rates determined by MB would be higher than long rates determined by M0). Since the interest rates are stochastic paths following these theoretical trends, we can only say the probability of an inverted yield curve increases as the NGDP-M0 and NGDP-MB paths approach each other.

Interestingly, an inverted yield curve is, according to Wikipedia, is considered by the New York Fed to be "a valuable forecasting tool in predicting recessions two to six quarters ahead." This interpretation of the data gives a foundation for that metric. It looks like the Fed steers the path of NGDP-M0 by adjusting short term interest rates (which depend on MB), pushing the NGDP-MB curve towards or away from it (with a buffer defined by central bank reserves).
How does the Great Recession look in this regard? Pretty shocking: 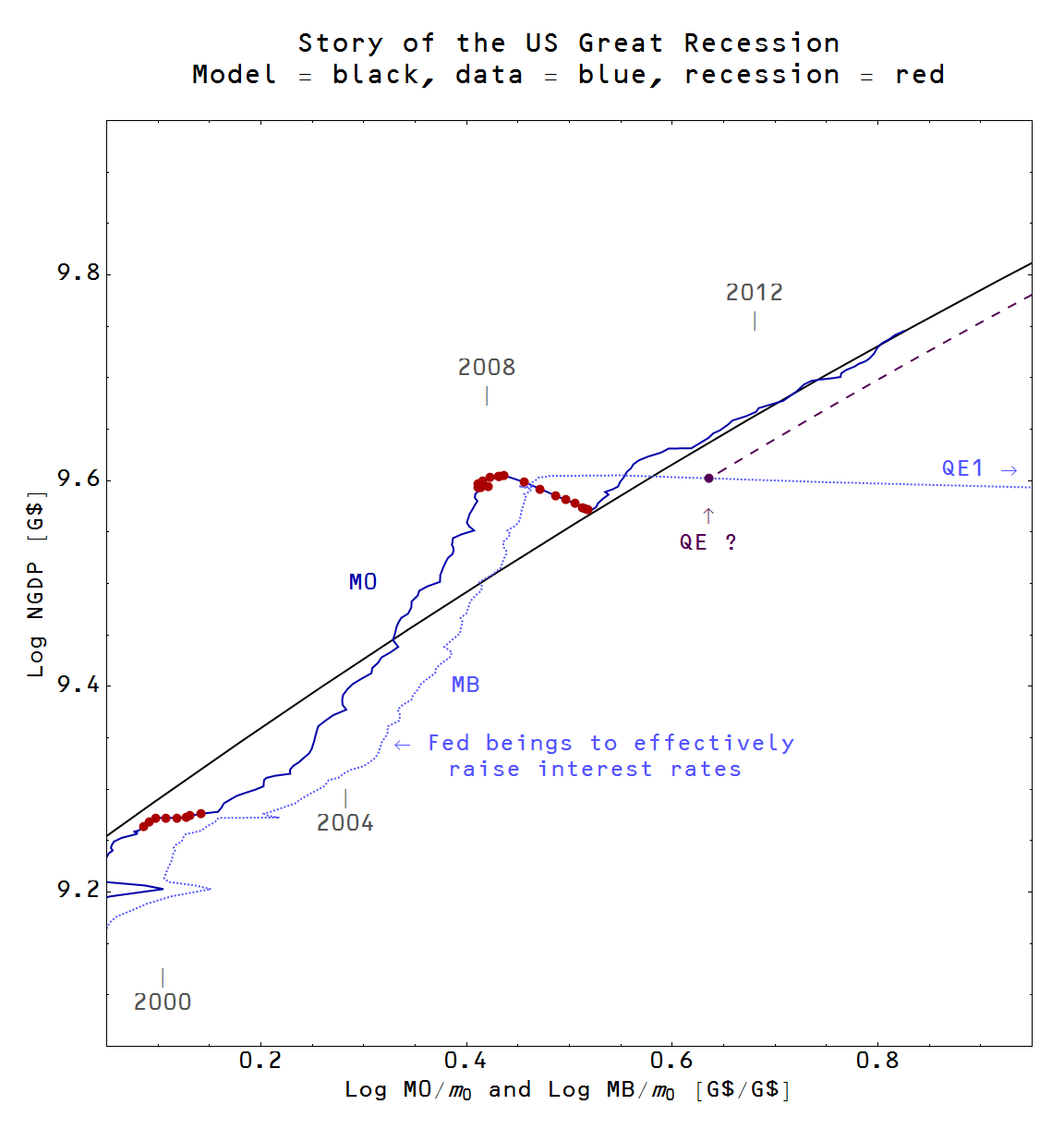 The Fed begins to effectively raise interest rates (or, from the monetarist view, contract the monetary base relative to its previous trend) in the mid-2000s, steering the NGDP-M0 line representing the economy (solid blue) right over the NGDP-M0 trend line (black). NGDP dramatically collapsed back to the trend in 2008.
After the recession began, the Fed quickly expanded the monetary base (QE1) to allow the economy to fall back to the trend line. But did the Fed need to expand as much as it did? If we take the 2000-2008 average monetary base reserves as a baseline, then the Fed only needed to expand to the purple point to achieve the same relative paths of NGDP-M0 and NGDP-MB with the same average monetary base reserves. The path is shown as a dashed purple line. In the following two graphs, I show what this means in terms of interest rates (only dropping from 4% to 2%) and QE (only about 200 billion dollars) -- the counterfactual is shown in dashed purple:

I think this picture of the economy is a nice synthesis of a couple of views (in terms of the money supply and in terms of interest rates) and seems to explain not only the broad trends of NGDP, but also the major shocks -- even down to a level of detail where I could (probably with a great deal of hubris) say how much QE should have happened.


However, we're also left with an issue. If recessions are like avalanches, steering the economy with monetary policy seems to be like pouring more snow on the mountain until an avalanche happens. The problem with that is that you increase the size of the potential recession. The Fed kept trying to cool the economy since the mid-2000s, but there's no telling how much snow will build up before the avalanche kicks in (i.e. how bad the recession will be).


The one thing this story doesn't explain is the prolonged period where the path of NGDP-M0 was persistently below the trend line after the 1990 recession (which is remarkably coincident with the Greenspan Fed). What held the economy below the trend for 10 or more years?


There are still some holes in this emerging story. However, I think it's a remarkably coherent story -- and it points to tight monetary policy as the leading cause of the Great Recession.
Posted by Jason Smith at 7:46 PM