There's some new monetary base data out today (and there will be NGDP data out tomorrow, so stay tuned).

If a) the information equilibrium model is right, b) there are no interest rate changes in the interim, and c) we can assume a similar rate of decline as there was a rise in the monetary base (a symmetric rise and fall), here is its expected path (with projected 1-sigma error): 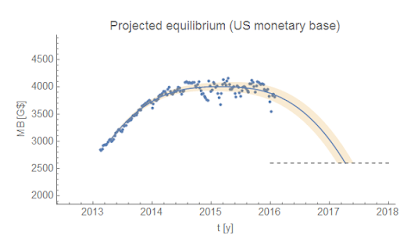 The final level of about 2.6 trillion dollars is depicted as flat because I'm feeling lazy. It actually increases a bit over time because of NGDP growth (see link at top of post).

This is probably a sucky prediction anyway since there are only about 6 data points from after the rate hike and the noise (error) has been growing over time. The symmetry argument is doing quite a bit of work here.

Just a reminder: the information equilibrium model does not predict the rate of approach to equilibrium. It's analogous to the ideal gas law: if you shock the system (rapidly expand the gas), the path of pressure isn't predicted by the equilibrium ideal gas law unless equilibrium is maintained at each point along it. Typically, this is done by very good thermal contact with a heat bath. However, a given quantity of heat takes a finite time to move from the bath into the expanding gas, so if the expansion is fast relative to that heat diffusion time the gas will get a bit cold. In that case, the pressure will be lower than Boyle's law states for an isothermal expansion. But eventually everything should return to equilibrium, and in the final state Boyle's law will hold.
Posted by Jason Smith at 5:00 PM