The slope of the Phillips curve is roughly zero

There was (H/T Brad DeLong) a working paper out of the IMF in November of 2015 from Olivier Blanchard, Eugenio Cerutti, and Lawrence Summers titled [pdf] Inflation and Activity – Two Explorations and their Monetary Policy Implications. In it they plot the slope of the Phillips curve (second graph), falling from the 1960s to the present: 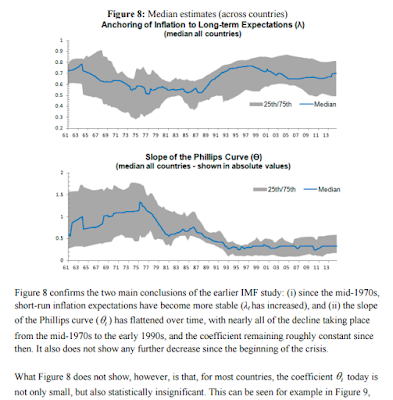 They say "[the Phillips curve slope] today is not only small, but statistically insignificant". Here is the result for the US (and Germany) in Figure 9 referenced in the graphic above:

This is consistent with my own finding (also from November of 2015): 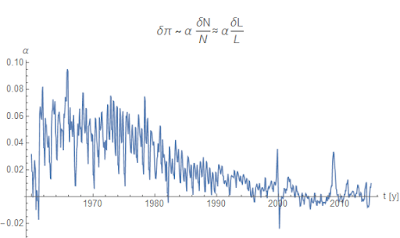 The relative normalization of the slope is not relevant (the Phillips curve relates annualized percentages of inflation and unemployment, where as this is presented as a fractions -- you multiply by 12 to get annualized inflation and the Blanchard et al result).

Another observation is that the era of the Phillips curve corresponds to the era of the labor force growing faster than the population -- of increasing participation rate. If inflation is just related to labor force growth, then the Phillips curve would have primarily been about the temporary alignment  of employment growth and increasing participation rate.
Posted by Jason Smith at 2:49 PM